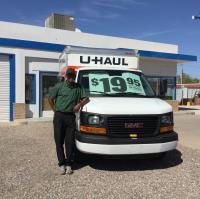 I told this guy I wanted the trailer for 24 hours and he said ok and he said it will hold a 2 day amount and I will only take a one day amount but it took. 2 days so i was overcharge and they donâ€™t call me back i was calling them for a whole week

All of you at UHAUL are outstanding.

You could refund my deposit

They went above and beyond to help..

Melissa Molina the office manager was so disrespectful rude lacked any customer service skills and when I first went to uhaul on main st where I made the reservation he told me I was suppose to take it to other please a few streets away so I was charged $1.09 extra yet I brought it back half a day early and she was extremely rude period!!!!!!!!!!!!!!!!! Really after returning it early and returning it where I was told to I really thought the $1.09 was a ridiculous charge and then she gave me no receipt no thank you no nothing!!!!!!!!

I did not get the couples name at Anthonyâ€™s but they both were so pleasant and most helpful!

This location was an unmanned location where you just dropped off the unit (trailer) dropped your contract in the drop box and went on your merry way. While it was convenient it was a bot disconcerting to not have a signed receipt for the unit I dropped off. In the end, everything went well.

a lot, people should have a receipt for the truck and the items they are renting. and you should not rent something you do not have. Did someone find a set of keys they were lost while we were cleaning the truck the keys were laid on the front seat . 520-709-1528

I wish there were wheel chocks for where I was instructed to park the trailer. Seemed too easy to roll backwards once unhooked.

We were late and Anthony made a phone call to us to make sure we still wanted it. He stayed open for us until we got there to pick the trailer up. He went over and above and extremely courteous and kind. A great experience. Thank you Anthony for all your help.

1. Be open for business for scheduled appointments. He opened at 8:45 & I had an 8 AM appt. 2. The store mgr informed me that he was leaving & wouldnâ€™t be back for 2 hours when I called to let him know my truck was loaded & I was on my way back to load my car. When my daughter called to see if we could cancel that part of the contract & get a trailer somewhere else rather than wait around for him to get back so I could get on the road, the guy was rude & made snarky comments about â€œmy sister in Rio Rancho not being able to wait an extra 2 hours for me to get to NMâ€. Ultimately he did wait for us to get there though. 3. Then the 1st trailer I put my car on was defective & had to unload/reload my car before I could finally leave. 4. The truck I had was good on the road as long as it was flat, but when I would tap the breaks going down a hill, the RPM would go up to 3000-4000 RPMs and stick therer for a couple of miles. 5. The whole experience left me feeling like this guy should not be running a U-Haul - he should just stick to his day job.

No one was on duty when dropped off trailer in Florence, Az.

Communication between both locations

Think the price was to high for the short time and dustant that i had the trailer, prettg sure will not be renting from there again

I ended up driving an ADDITIONAL 20 miles from my destination to this location, therefore putting me over my allotted mileage by almost 17 miles. Not good at all. The location seemed out in the middle of nowhere.

We had some trouble with the tow dolly. Anthony worked with us to get it changed out with another dolly. Thank you

We were contacted a day before our scheduled pickup appointment. Had we not driven down a day early we would not have had a truck for our move and lost a couple days of our vacation for nothing. MOST disconcerting.

Person who helped me was AWESOME!

Check trailers when they are returned and make sure they're swept out well. Bolt missing on front of trailer near hitch base allowed rain water and spray to get into the floor of the trailer and cardboard boxes got wet.

I felt a whole lot uneasy ?? because of the breaks on the truck! The breaks on the truck seemed to be in need for break pads. The felt like they were grinding bad. They were squeaking every time you stepped on the breaks as well. I did tell the gentleman where I returned the U-Haul but the gentleman where I returned it didnâ€™t seem to be too concerned about the breaks. I was actually scared because I was driving down mountains and I was afraid they were going to lock up on me. With me and my 10 year old. Was quite scary! Other than that everything else was excellent

Why the hell did you make me drive 19 miles away from my house to drop off my truck and then charge me for those miles???? I picked a drop-off location in San tan valley and you sent me to Florence. I want my $6.72 back. This is absolute horse shit!!!!

Anthony's always makes it easy and convenient for the customer. The owner is great.

Excellent customer service. The trailer worked perfectly for our needs. Thank you.

My mother rented the truck and she said everyone at this site was very helpful and courteous.

Melissa has great customer service skills and an all around wonderful personality.

Melissa was the best!

Make sure your vehicles are serviced and are safe.

Customer service skills of the person handling the rental operation were poor. Requested guidance on use of the tow dolly but rental person refused to provide said guidance.

The personnel that helped me was very helpful,and nice.

A little "rough" by MN standards.

Can not improve, Anthony was a most helpful person!

Truck was used the evening before and when I got it, I had to clean the windshield, lights, and cab before I left town. Truck ran fine, just dirty. Easier drive than expected as far as running well.

No interaction with Drop off Location so opinion applicable

Was called and informed by a young woman Tara in AZ the trailer I had requested would not be available. Uhaul offered larger box trailer at a reduced rate. I said thank u but declined. I needed the bike hauler trailer specifically for my motorcycle. I was informed that the closest trailer I desired was nearly 40 miles away instead of less than 0.5 at my original intended pick up location. I said wow that's awfully inconvenient for me, can someone from uhaul bring that trailer to my intended pick up location. I was told no. I had to drive to Florence, AZ. I said instead of box trailer at reduced rate, could i get desired trailer at reduced cost since uhaul is making me drive 40 miles to get it. Tara said they could take $50 off. Next day I drove nearly and hour to Florence where they had a 5x9, but was not the bike hauler design that I had originally requested, and told Tara that I specifically needed. So not only did I have to drive to Florence from Chandler, AZ. But when I got there it wasn't the intended trailer I told her I desired specifically. Naturally the guy working in Florence knew nothing of the situation. I immediately called uhaul and apprised them(it was a new girl on that Saturday) of the situation. She said she work make a work note/service request to a supervisor. I asked about the reduced rate witch naturally she knew nothing about. I asked for additional reduction since being hosed twice by uhaul, once for driving there, and 2nd for not getting the trailer I told u I wanted specifically. Additionally, as I was on the road 2 days after taking the trailer I didn't want because I had to have something, I again called uhaul. New woman did find my contract # with notation of situation but naturally could provide no level of service at time, would need to be handled by some level of manager which apparently don't work Monday mornings at Uhaul?! Now I fill out this review with the basics of what happened, still have all my emails and receipts, was charged full price, no discount or refund of any sort, and oh yeah, no one has called me yet despite me having called uhaul at least 3 times. Please call, 607-684-5519. I won't hold my breath.

The truck was so easy to operate, nice and clean inside and out. Couldnt have done without it. Thank you so much!

Agave the m close to home pick up. My original was not. Anthony's was a big help.

The service and truck were good but the mileage was very expensive. I will not use Uhaul again. Penske was a much better deal when I moved last time. It was the same amount and cost half the price. Uhaul is a rip off. I will make sure I tell everyone I know.

Anthony did very well but your customer service is -----0

Nothing. All was just great 5 stars to all including Jumpmovers and House to Home Moving !