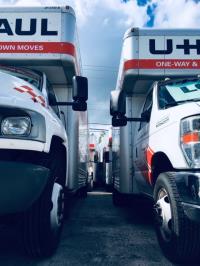 Nothing needs to be improved! The young lady in the office was very professional. I have never had such ease when picking up a rental. I have done mobile and in-person pick-ups in the past. Neither are ever a favorable experience. This recent rental was as effortless as any experience should be. Fast, direct, and simple. Others need to learn from her as to how to operate.

If I could leave this business 0 stars I would. They didn't go over a THING with me when I rented the truck and just said, 'The keys are in there and it's parked out front." When I returned it, the same thing - "just leave the keys on the counter, I'll email you the invoice." Which they never did. Until I saw a nearly $200 charge on my credit card, for what should have been a $29.99 rental. When I went in there to discuss it with them in person, there were all of these tacked on and double charges, for things I did not use or do, and was not informed of, up front, because again, they did not put it in writing or explain anything. They charged me twice for mileage and materials that I did not use, and cleaning that I was not told about, nor is it in the contract. They would not work with me on any of this, as they would rather lose a client and have a bad reputation, rather than make good on THEIR part. They are an absolutely awful company and not only will I never use them again, I'm making sure that everybody knows NOT to do business with Ballew's U-Haul as they are the absolute worst!

The employee who brought the car to the front was not wearing a mask which made me question the trucks sanitation. I also was unable to check-in on line and needed to enter building which I was hoping to do.

Explain miles charges - minimum or deposit and any refunds.

No improvements needed. Tony kindly brought the Uhaul to the front for me and that was already more than I could ask for.

This is my new dealer of choice.

Great customer service! They make the renting process easy and convenient. I will continue to use them for future business

Called before they closed to confirm my late arrival. The people who answered the phone seemed as though they had no idea I had rented a truck. Not at all interested in affirming the simple process to return rental. In the end, I returned the truck after hours with no apparent no hiccups or issues. I really appreciate the overall value and service that U-Hual provided.

I've used them several times and they have always been very good and I've never had any issues with their vehicles!!

Only what I stated above.

Truck was awful something wrong with the key . It wouldn't turn and start truck. I lost at least 2 hours of time trying to start the truck. The rude woman at the location told me they have been having trouble with that truck . Why rent it out??? I want a refund!!!! Call me 772-342-4948

Easy check-in and check-out. Staff was very friendly. It's the quickest I've ever been in and out of renting a truck. I like where the app is going with check in/out but I ended up using the staff primarily. For the app I had to keep logging in. Once I log in it should save that and allow me to check in/out without having to log in again.

Dolly on truck gets in the way and takes up space

These guys are the best Uhaul dealer I have used. They get you hooked up and out the door in no time. Excellent customer service!!

The customer service was awesome as well. The girl in the front was friendly and helpful! Nothing to improve in my opinion at this location.

Did not take credit card. Had to leave and get cash. Took about an hour to rent a truck with a reservation.

everything was outstanding from the pick up, the drive 750 miles to the drop off the following day.

I rent this 6 x 12 every six weeks and Tony + his daughter always help me out. They are friendly, kind and go to extremes to get me out of there within minutes of my arrival, even if I do not reserve a trailer, they go way out of the way to accommodate me. I refer all my friends to them only.

The parking is very tight. It would be easier to pick up and drop off the rentals at the storage lot.

Tony and Alicia give excellent, friendly service consistently. It's a pleasure to do business with them.

Be more honest about the real cost of your rentals.

The people were friendly and helpful! Very happy with the service.

I thought charging $70.00 to rent 12 blankets for a week was a lot. The pick-up and drop off was easy

Our moving experience went smoothly because of the dependency of our Uhaul truck availability and the staff at Ballews! Thank you!

I will definitely rent here again!

I was charged $20 for a utility dolly I ordered but never received. It would be nice if that was refunded!

I was charged $205. Then when we arrived charged another $185. No one can see these additional charges on their end. Frustrating.

The Bellews are the best!! I've never had to wait for a delivery truck. Always service with a smile!!!

Super nice people, very accommodating. They never make me wait + always check all the equipment for me to be sure I am safe on the road. I highly recommend them to all my friends and neighbors. The entire family are extremely considerate to my needs.

While the location was quite good the car dolly was very rusted and one taillight dropped out of it's socket a couple of times on the journey. The ratchets were locked up andhad to be lubricated in order to tighten up the straps over the tires.

Personable! Clean and so organized in the office space! Vehicle was clean and ready before I got there. I will definitely be a returning customer!

Staff was helpful but the "Trump" campaign material behind the counter will keep me from using this location again.

Thank you! You did great during a very difficult period.

I never rec a promised refund

You need to train your person

Mobile check in did not work

I have used this location twice and they are wonderful! I have recommended them already as I couldn't be happier.