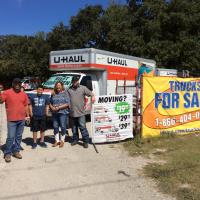 Owner on Mansfield highway is very rude, racist & disrespectful uhaul have people like her working for them says alot then she said she's the owner she close whenever she wants wow

Excellent service each and every time â£ï¸â£ï¸

Nothing Everyone there was really helpful and gave great customer service.

It's also a feed house and pet shop.

Everything was perfect. The equipment was ready when I got there and didn't take long to drop it off.

Love these folks!! Always a pleasure.

The only problem I had with the trailer was that the back gate wouldn't go all the way down. The chain holding it up was welded such that you couldn't let the gate down to use as a ramp. It did make loading into the bed of the trailer difficult.

Nothing keep up the good customer service

Uhaul sucks. 3rd time ive been double billed and your friggin market mgrs go off some friggin script and coukdnt careless about what the issue is. Didnt money back last 2 times dont expect to again. Lady a store is rude as hell. Said she dont care what i paod to take it up with you haul. Thats like talking to a post. Never use this company again and will never recommend it

I was treated like a customer should, with respect and appreciation. I really liked it.

The team was very courteous and helpful and also let me know about options that were available. Thanks very much I'm glad you're part of our community

Very friendly staff who knows what they are doing.

Nothing , the experience were geeat

Experience was overall great. Lovely people who explained everything to me and answered all questions. Would definitely return to this location

Not the friendliest or the quickest but got the job done and it was much appreciated.

Saturday, Feb 29, 2020, I picked up my rental truck at 2pm. My husband and I loaded it all afternoon, and then on Sunday morning, he went to work and I planned to drive the truck to delivery address.....only I couldn't get the ramp up. I even asked my neighbor for help, but he wouldn't either. so from 9am to about 1pm, I couldn't move the truck. My husband left work and got the ramp up. I called U haul to let them know about my issue, and I was told they would extend my drop off to 6pm, on the same day, because of the issues I had, with no charge. I even confirmed this with a Manager, named Josh. I then get an email from my bank saying that there was an over draft because aside from my initial $114 hold to get the truck, U haul held an additional $60 for the later drop off time. I was furious. I called U haul again, and sat on hold for about 45 minutes, only to have Customer Service tell me that a manager wasn't available. To say that I am furious is an understatement. I put enough money in that account for u haul, and 3 other small bills. BUT, because U haul is STILL holding $60, EVEN AFTER THEY PROMISED THEY WOULDN"T, I have uncured (3) $35 NSF from my bank!!!!!! A total of $105 NSF fees from my bank because u haul is holding money that they are not entitled to! Money that they told me they would not hold! This is absolutely UNACCEPTABLE! My husband didn't even WANT me to use uhaul, as you guys do not offer a military discount, but against his wishes, I did. NOW I REGRET IT!!!!!! I would like the money that is being held to be released, and the (3) $35 NSF fees reimbursed by the company. I am seriously so furious that I could cry! How could a company do this to ANY customer??? Customer service is so important to all companies, and I want this FIXED! I can be reached via email, or over the phone at 214-490-6628

Nothing Discount feed is awesome when it comes to renting a uhaul and their employees are awesome and very friendly will rent from them again.

People were nice. Place was horrible. Well parking location was horrible, not the business. Dropped off after hours per their directions and they locked their location. They had no area other than the side of the road. This is not acceptable. I used the trailer one day ... The day of pick up abd the final day. When i called to ask if there were other options to save money by dropping off locally, she told me no and she didnt know what other fee there would be that the trailer needed to be brought back which cost me an additional 6 days. That's bad business. Maybe going one way would havea e been more money however, it would ha e been nice to run the numbers and compare but she didnt give me the option when I called her. Jarrett Lemmon

My experience at the Discount Feed location was excellent, however I only wound up there because of a TERRIBLE and unacceptable experience that I had at the Uhaul Center at 2936 South Fwy, Ft Worth 76104. I have been renting Uhaul trucks and trailers for decades and have never been treated as rudely an dismissively by the "person" that waited on me there. It was as if they were doing me a favor by allowing me to rent from them. They need a refresher course on customer service. Truly a disappointment.

My only comment was inspite of the fact that I have pre-registered to rent a Uhaul truck, I still have to go through the whole procedure so the wait was longer.

Very nice lady that help me

The people here were awesome! They were all very friendly and went out of their way to make sure that we were well taken care of. I would be happy to recommend this location.

Very nice people and they take care of their customers.. I will use again....

Discount Feed's parking lot is a little bumpy and could use paving. Pam is very helpful, friendly, and efficient.

Need to take picture the truck to see any damaged !

The service was great. She was very friendly and so helpful. The truck was clean and ready with the air blowing. (Excellent customer service) No issues with the truck as far as maintenace and the return was seamless. I would recommend the mobile pick up and return to anyone!!!! This was a great experience overall?

I've moved many a time, but this was the most pleasant Uhaul rental I've ever had.

Pick up was not smooth but completed without drama. If you just need a quick trailer rental, it's available, but there are no perks, discounts for AARP or military. I was given military discount at my previous rental location and the cost was cheaper for the same trailer. Next time, I'll go back there.

The young man that met me when I pulled in was very courteous and helpful. He had me in and out in less than 5 minutes.

Stock more than one tow dolly .

best service ever thanks

Service was great. Entrance could be improved. This is basically a farm style rural location in suburb. No restrooms. Great petting zoo for those moving with children.

There was no space to park. It was very dark, didn't feel safe at this location.

The service was great. Thanks

No one was at the location where I turned in the trailer in Burleson.

That is difficult to say as they were great! I appreciate the nearly new truck, and all the help that they gave me. Thanks for making the difficult job of moving a little bit easier for us!

Great experience and great Customer service. I will return again!

Stay the way you guys are

It was all good as far as I'm concerned. Everything was on time and everything worked out very well! Thank you very kindly for all of your kindness and consideration!