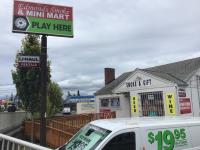 i go to this place everytime i need a Uhaul. He should have more buisiness ahah

Perhaps if a pick up location is no longer in service or not available, don't have it as an option to click on, cashier was great.

All went well. Thank you

Let some little knowledge about use the vile hole because uhaul vechile littlw diference than regular vechile to use . Thank you

On pick up the only person manning location was late by about 20 minutes. There was also almost no space for parking, hooking up, and confirming lights and such were fully functional.

Stay the fuck away from this location. He was 25 minutes late, showing up 25 minutes after his store supposedly opened at 9 (so 9:25 arrival), the Uhaul system was down so he almost turned me away, and the truck was dirty. I'll go somewhere else next time, thanks. And so should you.

Had a great experience Tek was very professional and friendly

Get a better reservation system

This is not a full U-Haul rental center. It has one employee on duty, minding the store and U-Haul He was constantly on his cell phone texting while I waited...and waited. He started off somewhat pleasant at first; then, he quickly changed when I expected him to hook up the trailer to my car. He said he doesn't have to do it, it's a courtesy and I wasn't being very nice. I tried to explain to him the 2 hours I spent on the phone with U-Haul the previous day because the trailer I reserved to pick up at 7am was not available and I was told I had to take a ferry to get one, or drive a minimum of 2 hours to another location. The trailer at his location was my only option and I couldn't pick it up until 10am. This disrupted my plans to be on the road from Washington to California by 11am. He finally hooked up the trailer, while continuously asking me if this was right? I told him that I had never hooked one up and that I expected him to know if it was done correctly or not. I took pictures of him. The man appeared frustrated and angry with me, as I was with him. Then, I asked about the lights? He said he does not hook them up and I had to do it. Then he told me that I do not have a â€œconnectorâ€ pack and I needed to drive to an auto parts store up the street about a mile or so to buy one. I reminded him the trailer attached to my car did not have working lights and was told â€œit's just up the streetâ€ and it wasn't a big deal to drive without taillights. He said if I was staying local, he would suggest doing without??! Long story short, after waiting on a tow truck it was discovered my car had a â€œconnectorâ€ aka adapter, which had been expertly installed along with my hitch by U-Haul two years previously. There was something wrong with the adapter. I asked the man again what should I do? He shrugged his shoulders and said it wasn't his problem. The tow truck driver was kind enough to locate an actual U-Haul center with a mechanic about 10 minutes away from our location. He even offered to follow behind me and not allow other cars to get behind me while enroute to U-Haul. He waited until he knew I was being helped. Then the waiting began on the arrival of the mechanic who was almost an hour late to start his shift. I eventually returned home to start loading at around 4pm, 6 hours after I picked up the trailer!!! During this reservation I found a complete disregard for my time and money ( I had to pay for the time a helper had waited for me to return with the trailer: two hours paid for no services)! This was the worst customer service experience I had ever witnessed with U-Haul and, I had used them 5 times in the past two years. I have a complaint for a supervisor to address the issue and was told I would be called back within 72 hours by the customer service rep (whom, by the way, was extremely polite, respectful and empathetic with my situation). Due to my experience in the past week I'm not holding my breath for a call back. I will most likely have to call ...again..,,wait on hold for a minimum of 20 minutes to speak to someone, tell them the story, get transferred several times and then get told I'll get a call back.

The owner of this store was one of the most gracious, professional humans I've ever met.

Very kind person running this location. Answered my questions thoroughly and even let me check in early!

Only one person at the location which is mainly a store for Cigarettes and booze, No equipment on site if needed, person could/would not leave store to assist or check anything. Reservation system sucked as there were trailers at a regular U-Haul location miles closer to my home that I was told did not have any trailers, but I saw them there as I drove by with the trailer and on my return trip so I am unhappy with U-Haul and its BS system

Having U-haul directly associated and run by a smoke and convenience store was very weird and an odd business association to support such activities. U-haul should review what it supports and see if this is in alignment.

The door had gotten stuck upon it being opened per the request of the attendant, then they proceeded to tell me I had to fix it without assistance which was extremely difficult and arguably very dangerous as I did not have the same knowledge they did about u-hauls. Other than that, the gentleman was kind.

we called to rent a pick up truck from the North Lynnwood UHaul, which is a large, clean facility, and the agent made the reservation at this location. The truck was dirty.

The location I picked up at Is very convenient the management was friendly and helpful . The price I can't complain very reasonable. I'll use U-Haul again.. WG

I wanted to return the UHaul a day early, but they decided to close early. Then the next day, they called me as oon as they opened and demanded that I return it immediately, even though I had several hours left before it was due.

We were having trouble using the 24/7 truck share feature that uhaul provides. The gentleman working at Smoke and Gift came out and asked us if we were OK, and when we told him we were having issues with the site he welcomed us in and started manually resolving our issues. He was kind, efficient, and attentive.

Extremely unprofessional and very very rude. Would never go to this location again.

It was my first time dealing with this location and it was great. Highly recommended. Try it and you will rite the same. He was very helpful and attentive. The fastest and the most professional service that I can ask for. Thank you so much!

The owner of this location was awesome! I live in Brier and this shop is very convenient. The customer service was the best !

Great personal service. I showed up an hour late and the staff was still more then willing to help me by holding my reservation for me despite other interest. Thanks Edmonds Smoke and Gift!

Was told the fuel in the vehicle was at the 1/2 tank mark. This was not true when I got in the vehicle, but I thought that it was close enough. I filled back to the same place, but got charged for the difference anyways. This is the first U-Haul that I've rented that didn't have a full tank when I got it. I also did not get a contract specifying the 1/2 tank agreement when renting the vehicle, either by email or on paper. I didn't receive any kind of contract until after I returned the vehicle and got charged for extra fuel.

super easy pickup and return. The truck was in great condition.

Scheduled for 9am but owner of the shop didn't arrive at the location to give me the key until 10:05. Then he argued with me about the gas after I had refilled it to the same level as I started and charged me extra.

The owner is helpful and friendly. He was accommodating when I had to extend my rental last minute. Definitely the highlight of my furniture moving experience.

The customer service rep didn't mention gas needed to be filled up and charged me extra for it. It was very unprofessional. Also the place doesn't do overnight dropoff which was a bad experience.

Rental process should be more smooth and simpler.

I will always use this location in the future! The manager was amazing to work with too! Great customer service.

Trek's customer service was excellent. Nothing to improve on.

Great experience at this location. I will make a point to come back and rent here. Very friendly and professional staff.

I rented a brand new van - that actually fit my 5 feet tall self. Sales person was very professional and helpful.

What an easy transaction! Thank you Tex for going over everything with me throughly. I would highly recommend this place and should I have to move anything o would go here. Great customer service.

There is limited supply. The owner is nice but I could not drop the truck off in the middle of the day on Saturday because he would not be there. The phone app did not work as well. I would not tell someone not to use this location but would tell them of the constraints that could be involved.