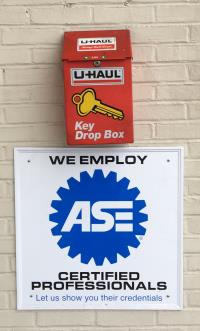 The gentleman who worked at the office was helpful in finding the truck and making sure everything was in order. The truck itself was clean and had about 1/2 a tank of gas in it.

Provide the customer with the printed contract that they have supposedly signed so that they can see that the mileage you are saying is on the truck is in fact accurate. I was charged for 17 miles that I did not use and the printed contract was to be emailed to me. It was not emailed to me until a half an hour after I left there. This could all have been avoided if I could have compared the mileage on what I was signing to the mileage that was in fact on the truck when I began my trip. I wonder why this guy seemed extra nice and why he told us that "who knows people could have been driving it around" and to "make sure you take a picture".

Being a little handicap made hard to get up to the 2nd floor other than that you're company did a great job!

Bob was great, friendly and helpful.

Truck could use some preventive maintenance, seem to run rough, but it did the job. Maybe the Ford power plant just runs rough like that I don't know. Also was there for 0800 pickup office was not open had to wait for help.

Exceptional customer service. You don't find that many places anymore...

The chang oil light was on . I received extra charges that was not covered in the contract.

There was no one in the office when I arrived. I had to call the telephone number to get someone to instruct me on what they wanted done with the truck. The location was very convenient and easy to get to.

I called and received a harsh response over the phone. First time team did not pick up and second call they acted like I was a bother. I did not interact with anyone in person as I dropped the car off and left the keys in the box.

You need a better customer service specially at this location. They are very rude and unpleasant.

The agent was very helpful.

Mark was great to work with. I had actually reserved a box truck because I could not find an enclosed trailer. There happened Tobe one on his lot. He said it was available so he made the switch and also let me borrow a hitch and light adapter. Very accommodating.

I requested Triangle Motors and the pickup location wasn't updated until almost an HOUR after my scheduled pickup. And that was only because I went to Triangle, and they called UHaul to find out where I had to go, which was back across town to Reichs Ford Rd. I had a similar experience in June. BETTER CUSTOMER COMMUNICATION IS NECESSARY IN ADVANCE!

The people were very nice.

The customer service was great! Mark was polite, informative and professional. That's why I came back for the second time since moving to the area and will recommend this location to anyone needing a truck in the future. Fantastic experience!

The windows should be cleaned. Lots of bug debris and had to go to Sheetz to clear them off before getting on road.

Worked very well with me , the owner has always been on point and I will continue to use them for my truck rentals

A sign on the lot where the office is

Just dropped off my key and able to leave

Peop!e and equipment were excellent.

Nothing to improve. Staff are extremely helpful, friendly, and accommodating. Would rent from here again.

Rental agent was one of the nicest and most helpful person I've experienced.

Person at the desk was very unsure about what to do...4 attempts later, was helped to figure it out.

Evergreen is a SUPER representative for your company. Great service, and they explain everything perfectly. Wish all companies were like Evergreen!

Again, The U-Haul app was OK, but next time I will use a U-Haul Office, not a third party vender.

The only issue we had was that we were told that the trailer we got would haul a 2br apt easily. We had it completely full packed very tightly plus the bed and cab of our truck fully loaded and still had to leave some things behind in Maryland and were in FL. now.

Great customer service - Jason was very helpful - would definitely return to this location.

Great Customer Service, a pleasure doing business with. Will recommend!

Mileage charges are way too high.

On reservation confirmation phone call the original pick up location (JAckie at 400 Prospect Blvd Frederick MD) told me the pick up time was 3 PM Saturday, NOT 11 AM as directed. I was told that there was no truck available at that time so the computer changed it to 3. I told Jackie that would be an issue. After a brief hold she told me they had a truck for 11 AM, the size I ordered (20 ft), and all was ok. Saturday morning we were running late so I called to change the pick up time. I did not get the actual pick up location on the phone, sounded like a call center. Girl at the call center confirmed 11 AM pick up and we were getting a 13 ft truck and trailer for a dollar. I WAS NOT MADE AWARE OF THIS! At no time did anyone say we were going to be supplied with this. We ordered a 20 ft truck. I informed the call center woman that I had NOT ordered such a thing, so she put me on hold and contacted the reservation center. After a brief hold she told me the location above had a 26 ft truck which we could have at the regular 20 ft truck price, which was very nice and we accepted. We were caught in traffic and running late again, called Evergreen, and the gentleman there went out of his way to wait for us past closing (We arrived right at closing, 2PM). He couldn't have been nicer. The woman at the call center was very nice, but someone should look into how our reservation got changed from a 20 foot truck to a 13 foot with a trailer. Unknown if Jackie was involved with this or not. My issue is we were not notified, and I feel like we were duped into thinking we were getting what we ordered but would have a surprise when we picked it up. Just FYI Penske called me Friday as I was on their site Thursday afternoon looking at prices. They tried to offer me deals to switch my business to them, but I refused, citing I was at work and didn't have time. In retrospect, I should have done that. Feel free to call 484-375-8373. Dave Evans

Jason is an excellent representative

There wasn't an "office" for this location. We were met outside by the manager and transaction was done outside.

Clearly mark which entrance trucks should use or keep shop vehicles out of the way.

This will be my first stop for future U-Haul rentals. The two gentlemen who helped me went out of their way to treat me like a VIP. There was a wide variety of rentals and even though they were busy, they were very courteous and friendly.

I was misinformed My Jeep fit on the trailer but my 1500 Dodge didn't ,because trailer rail was couple inches to short. Had to rent a different one. .. Major pain. ...

They took good care of me Thank you