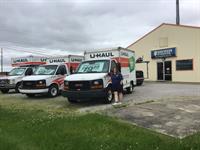 Found out I didn't need it after I got but it was too late to turn in for possible refund. So I put it in the truck the saleswoman advised me to do.

Everything was perfect. I absolutely loved the receptionist. She was awesome.

The representative never check the gas, and next thing I know I am checking my account and there is an additional $87 charge. The representative in Oklahoma gave the vehicle to me with 3/4 of a tank, and that was the amount we left in the vehicle. I am requesting a refund.

I tried to rent a truck the week before this last one and it was an awful experience. I was frankly, irate. This experience with this location, staff and truck helped me regain some confidence in Uhaul.

Very helpful and a pleasure to deal with. Thank you for all your help.

Friendly, helpful office staff. Easy rental process and convenient pick-up and drop off. I would recommend Iron Guard Storage to anyone for truck rental. Thank you.

Truck smelled like smoke and the trailer light did not work. Radio also didn't work.

Was very easy to rent a truck. Didn't take long.

It was about as easy as it can be.

I would definitely recommend them for all U-Haul needs she was polite and very quick!! I started out my reservation at Riverside U-Haul and they rented my truck out to the people in front of me that needed and had reservations for 15 needless to say after waiting 2 1/2 hours in line I was not happy when she said I would have to either reschedule or take a 17! I was even madder when she called out for the person who had reservations for the 17 to make sure he wasn't in line and she did not do that for me! Thanks to who ever she called that found me a truck i was able to move all my stuff 3 1/2 hours away.

They did have the truck and the furniture pads that I had reserved, but they did not have the appliance dolly, which was a big deal as I was moving a washer/dryer and fridge. They were able to make adjustments to make this right, but I have to be honest that I would be nervous to rent from here again in case they don't have the equipment I reserved.

Very good customer service. Lady I dealt with was very helpful and nice.

I rented a truck from another Uhaul location in Evansville, 10 miles from the Newburgh, Indian location and the truck was more modern, quieter and it was super clean when I picked up. The Newburgh location needs clean and up to date trucks.

Stopped by and had one ready for me right away without appointment. Very courteous and excellent to work with. Would recommend to anyone who wants to rent a truck. Ron

I filled up truck to indicated mark but they still charged me almost $15 for fuel usage fee.

Folks in the office were great, the truck was the best eve rented from Uhaul.

We did have some things that got super wet from water rushing down the inside wall. Someone needs to take a look at that.

When I booked my rental, I booked for the Morgan Ave, Evansville location, but was given the Newburgh location instead

When I made the reservation on line, the charge for the Safe Move was $10.00. However, when we picked it up, the charge was $14.00. Why the difference? Or did I mistakenly read something wrong?

I was totally satisfied

The truck leaked in the front cab over section from when it rained.

The Iron Gate Location was the first place I rented a truck. I tried renting a truck from there a second time and my conformation came back at a different area. I also wanted to pick up at noon on Saturday. I get a call from the other place telling me that I was to pick up the truck at 9 am. I was able to get at 11 am before they closed. The online method did not tell me this. The renter was kind and understood the situation. The truck was clean.

When unloading the uhaul it was raining extremely hard. The manager gave us some extra time to unload. Even when they were about to close.

Manager was very helpful. Made the process of renting a car hauler very easy.

U-Haul corporate needs to work on their web page - on line reservation process does not fully function reliably.

10 foot not available so 15 foot was substituted at the same cost. Very clean, good customer service.

Our whole experience was awesome.

Have the trucks there that we reserve, we shouldn't have to wait for a period of time for someone to return a truck. I reserved a truck 1 week in advance. A 10 foot doesn't work if you reserved a larger truck. Especially when you charge .99 cents per mile also. I will look elsewhere next time.

I would definitely recommend this Uhaul site. The lady that waited on us was very nice and helpful. Was a very pleasant experience. Thank you

Best Uhaul dealer ive ever been too.

The staff was very helpful and friendly.

Renting a Uhaul 26 foot truck was absolutely the way to go for our move across town. Very reasonable price too.

I was impressed by the UHaul representatives at this location. They are professional and courteous!

Representative was very pleasant and helpful. I did think the mileage cost was going to be .79 cents instead of .99 cents a mile. I have used Uhaul many times.????

Service rep behind the counter was great . Very easy transaction and the truck was very well kept. Will definitely return here when needed again.

Staff was very helpful and courteous.

So thankful that they helped me fix my drop off place, Paul was fantastic at fixing things in the system so I wouldn't have to pay a lot extra. Thank you Paul for being a blessing on a very long and hectic day.

Customer care for uhaul don't keep the promises. Please review the conversation recorded on 10/10 evening at 4:52 PM. They offered $694 for truck which turned to $771 when I went pick the truck. If the feedback matters anything, resolve this issue

Increase staff, the gentleman was overwhelmed. He helped me with everything I needed and did a great job, but calls were coming in and there were more customers than just me.

This is my second time dropping off a truck at this location. The staff has been helpful and knowledgeable. They do a great job.

This was my first rental from U-Haul and will definitely be my last. Overall a very frustrating experience - the company does not live up to their slogan of "moving made easier". I rented a 20 foot truck to move from Indiana to Colorado (15.5 hour drive), but spent 12 hours sitting in the sun while broken down on the side of the highway. When the mechanic arrived and estimated the repair time at approximately 5 hours, I called U-Haul to ask about a replacement truck but was told that wasn't an option as they needed their truck repaired. After the mechanic ran into more issues while repairing the truck 9 hours after breaking down, I was told by U-Haul that a replacement truck was actually an option but now that the mechanic would be able to fix the truck in approximately 3 more hours, this would be quicker than transferring my belongings to another truck (though it hadn't been an option earlier that day). Due to my 12 hour day, I was not able to move into my new residence the day I had planned and had to spend another night in a hotel on the road and was unable to obtain the help unloading and unpacking the truck that I had anticipated. When I called to request a discount I was directed to Karen Embry, a manager who told me that the best she could offer me was a $50 discount on my $1,200 rental, though she admitted she hadn't looked up my contract, where I had rented from or too, or what the total was. When I explained to her how frustrating of an experience it had been, she responded by telling me that I was forgetting how frustrating it is for U-Haul and the breakdown cost them money. I find this response to a frustrated customer to be unacceptable. This is a customer service business and breakdowns and compensation for down equipment is part of the cost of doing business (the costs are more than offset by the rates they charge). After back and forth (and the manager finally reviewing my contract), I was offered approximately a 15% discount on my rental and was told that it was the best that could be done. Given that I was broken down for 80% of the trip time (12 hours of a 15.5 hour drive), I find this unreasonably low and quite frankly, insulting. I understand equipment has issues, but I expect a better response and more understanding from a company when issues arise. Going forward, I would gladly pay a significant premium to rent from Penske to avoid having to deal with customer service like I experienced and will strongly everyone to do so as well.