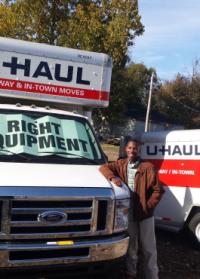 Thank you so much for walking me through the steps over the phone. I was delighted to hear a friendly voice

Winnie is a great U-Haul manager. Thank you so much.

Not much signage. Difficult to know exactly where to go.

This location and the Colemans were great! But, my overall experience with Uhaul was poor and disappointing. Your people out of Jackson changed my pickup location, but a trailer wasn't available. They didn't seem to know what they were doing. And they were rude today when I called with concerns. Those in your Jackson office, 601-352-2602, need attention. Thank you.

Hard to pull out onto street

too small of a parking spot for a 26 foot truck, they were closed and did not answer phone , they had a drop box for the keys , and way too far from highway. in a bad neighborhood.

The service was great the truck was semi clean and it only had 1/4 a gas when it should have more.

i had to pick the truck up 30 miles out of my way i also had to help the worker do my paperwork on his computer. he did know what he was doing. he was suppose to make this were i could drop off closer to were i lived

Auto transport was not ready. Only auto transport on site had a non running minivan loaded on it. We had to help the Uhaul person unload the minivan so I could take the auto transport. Very unprofessional uhaul rep.

The representative was unaware of how to function the Uhual transactions. I waited two hours, to get one printed receipt of express checkout, gas to be in truck, which was not completely full by the way.

I was told to get the miles off the truck. Last I checked that wasn't my job.

My experience at the drop off location was just the opposite of the pick up location. I had no trouble whatsoever. The staff was friendly and knowledgeable. I would recommend this location to anyone.

Let the customer know how much the total is that they have pay for. This would included rental and insurance. All cost should be told to the customer when calling on the phone so there will be NO surprises later on their bank statement.

I am 66 year old female ad had to unhook my own trailer. Thank goodness my grandson was with me to help

Huge hole in roof. Caused 7 gallons of water to leak into truck. Didn't give me my appliance dolly as guaranteed per my contract.

There were no signs that said UHAUL Rental. That is the only thing that I would change. Other than that, it was a great experience.

Make sure truck is inspected before each customer receives the truck. When I pick up the truck there was only 3/4 of gas in the truck but when I dropped it off the employee at the drop off said that my truck had been logged in as full.

This review survey is designed to totally ignore the key issues that made my rental from U-Haul a total nightmare. I made the online reservation to pick up a 10 foot truck at Carthage, TN. My online reservation was confirmed 4 days before the actual pick up. Then the day before the pick up, I was sent an email from U-Haul stating the pick up was for a 15 foot truck to be picked up at Smithville, TN---which I could not do. I stopped in Lebanon, TN U-Haul and that location advised I could pick up in Lebanon (which would have been easier) but they only had a 20 foot truck. Then I called U-Haul Customer Service and was advised they had a 10 foot truck available in Baxter, TN if I could get there before noon the following day---which was a major inconvenience and was not what was previously confirmed but I needed a 10 foot truck---not a 15 foot truck or a 20 foot truck. I drove to Baxter, TN, had to completely redo my reservation, paid for the rental---all of which took 2 hours. Then when the U-Haul Service Tech went to pick up the truck and bring it to me, it was not there. I was then advised the Regional Manager had done an inventory count the day earlier and found all trucks were accounted for---including the 10 footer which was now listed in my contract but was not there. Then I was told the truck had been taken the day before by the Regional Manager to accommodate a break down. Then I was told there was another 10 foot truck now available at Smithville, TN if I could get there by 3PM---which I did. The rep at Smithville, when I arrived, stated that a similar occurrence had happened a few months ago when at the Baxter U-Haul Location another truck turned up "missing" after rental and it was found that the Manager had rented the truck for cash and did not list the truck as being in service. But, I did get the 10 Foot truck after having a confirmed location in Carthage and no truck available at that location after confirmation and after going to 3 other sites to get a truck. I was also promised a $200 credit off my billing when I had returned the truck to Indianola, MS as I first confirmed. But, it was no surprise when I got to Indianola and no credit was to be issued. Promises, Promises and Promises all made just to get me out the door. I will be the worst thorn in U-Haul's side until I get want was promised. And, I will never use U-Haul again and will never speak well of U-Haul. Again, this survey is deliberately obtuse and vague. It only asks questions about the sites where I finally picked up and dropped off and does not include any questions about the issues I encountered in trying to stick to U-Haul's confirmation of my initial reservation. Shame on U-Haul and its Associates

Limited room for parking trailer(4x8). Difficult to access because of traffic.

The female who setup the contract was nice and helpful. I returned the truck over an hour early and instead of giving me a friendly reminder to refill the tank, I got charged $40 for 1/8 tank of gas with pretty bad customer service from the check-in guy as well.

Be clear up front. You advertise $19.99 rate, but eventually the consumers will have to pay up to $100. This is deceptive. I would gladly use some other company if it was available.