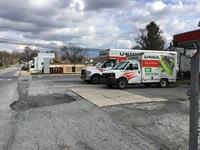 You changed the pick up location

When I made my reservation for a 17' truck, I made it with the intention of picking it up and returning it to the West Chester, PA location that I selected during checkout. However, when I went to double check the info for the rental truck, I found that I now had to travel to Parkesburg, PA which was 20 miles out of my way as opposed to the < 5 miles distance I expected to drive in order to obtain the moving truck. My roommate and I were extremely upset at the additional miles we now had to travel/pay for, as well as the added stress that we did not need on such an already stressful day.

The lady in charge was very professional & pleasant.

The office was a disgustingly dirty falling down garage. The woman was coughing and sneezing and joking it â€œwasn't the virusâ€ she just had allergies, refused to put a mask on while we were in the office and proceeded to make a racist political statement to me and my fiancÃ©. I was already disappointed with the treatment I had with Uhaul prior to meeting her, this just pushed me over the edge. I don't want to use your company EVER again.

More proactive approach to providing necessary information about the rental. Also, a clear definition as to what time allotment is given with a 1 day rental. I had to call and get charges reversed as I was almost billed for 2 days with the truck and dolly rental

we did not receive two dollies like we ordered and paid for. the lady working at this location was no help . when we walked in to ask a question she was smoking and coughing and was not wearing a mask.

No smoking in the office. Employees should wear masks and sanitize/wash hands after coughing and blowing their nose. Make sure there is lighting in the parking lot. The person working there made the request and it was not taken care of.

I think the person was the owner and she was super helpful and super nice. The only thing I noticed and I don't think The owner can do much about it. But because of the pandemic we are currently in the office was a little tight might be good to have someone outside to assist the check-in process maybe a drive up option. Other than that I was very please:) Thank you Keston

My pick up time was 7am. The employee had not done the paperwork when I arrived at 7:20am, and so I couldn't get my equipment using the uhaul website, I had to go in. She originally told me she didn't have the dolly that I ordered, but finally found one in another truck. The back of the truck I rented was muddy inside, but by that point it was almost 8am,so I told her I'd clean it myself just so we could get moving. She suggested that I did not need to fill out the damage report, and the truck already had so much damage to the outside that I did not know where to begin. Once I started driving it, I realized the cup holder was broken. I brought it back am hour early, at 6pm, and spent 45 minutes attempting to return it using the uhaul website. The website couldn't verify my location, so I called uhaul because the business was closed and I couldn't get help from them. After being on hold almost half an hour, I figured it out for myself and was able to return the vehicle. This was not the location I originally chose, but my preferred location did not have the truck I wanted. This added about 14 miles to my trip, which I had to pay for. When I realized they changed my pick up location, a uhaul employee told me over the phone that I should be grateful to have any truck due to the fact that I ordered it only 10 days before our move, but when asked she couldn't tell me what would have been a better timeline to order it for next time.

The appearance of the location is TERRIBLE. However,the equipment i used was fine. The van i used oil maintenance light is on but....

Drop off was easy and the Lady on the phone was helpful and nice. Parking was very tight for a large truck.

It was closed when I dropped it off. I called the number on the door. The lady was very nice and friendly.

I was extremely satisfied with my van rental. Thelma at M &N Towning made everything so easy and convenient, the van was clean, ready and waiting for me to pick up. Thelma has always been a kind,wonderful woman and very professional and I definitely would recommend renting from her.

You could make the online registration a little easier.

My experience was not about the location but the horrible experience I had prior to the pick up. The truck was changed to a smaller size and ten minutes before I was to pick it up I i was sent an hour from my house with a last minute call despite multiple conversations that morning with the other staff. I want to speak to someone. I was charged for mileage despite these changes and I dropped it early but was charged for dropping it before the store opened. I paid more for movers as a result. I'm very dissatisfied with my experience and I have spent lots of money over the last 18 months renting from your company.

They didn't take truck to storage place to be picked up. He was not there. The one lady I talked to was not very nice

Keep doing things the way you're doing them, I think the service and equipment are always great!

Keep doing what you are doing. It was a pleasant experience.

very far away from me

Not sanitary, definitely could definitely tell it wasn't cleaned or sanitized in the middle of a pandemic...

There is nothing to improve.....as long as a PERSON is there to help. We were BLESSED BY A LOVELY WOMAN who helped us add a designated driver {which i was unable to do online, after 2hours on the computer). God BLESS a human being able to help!...Your Chat line was horrible and no help at all. Next time i will check into enterprise! I would recommend ONLY because of the WONDERFUL, KIND woman who helped us.

The shop wasn't open, and this was not my contract location drop off. It got changed to this location and uhaul didn't even know they weren't open.

The lady that owns it went out of her way to help me out. I'm very appreciative.

The lady there was very nice and was sympathetic towards me due to the fact that I had to spend almost an hour trying to pick up the truck. And the reason why it took me almost an hour to pick up the thuck was because I tried to be responsible and use the mobile pick up and that was the most horrible experience ever. However like I said the lady there was very nice and try to help as much as she could.

hard to rate location, I returned after hours. People were helpful on the phone

Had difficulty finding drop off location since link did not work. Since it was a Sunday no one was there to confirm process. Only reason I left the truck was due to the fact other u hauls were parked. Site looked abandoned.

Make sure the previous renters return vehicle when supposed to

When I scheduled the reservation, I requested an appliance dolly due to moving a refrigerator. After the LONG process picking up the truck (due to the busy servers on a Saturday morning), I didn't check the back before I drove away. When I did finally open the back, there was no appliance dolly. â˜¹ï¸ Thankfully, there was a Uhaul store location near my old apartment and they had an appliance dolly. They let me use it at not charge. A relative took it back after we finished since it was not near my new place. It was rather inconvenient, having to make an extra stop to pick it up, but I'm just thankful that the store was so helpful to fix the issue, especially since they were not the location I rented the truck from.

Real good service. Will go back as needed.

I was very disappointed and annoyed that my pick up location was changed the day before my move to a location 10 miles away from me. And when I tried to call U-haul I was unable to reach anyone, kept getting disconnected.

Curt was extremely responsive,helpful and friendly. We needed a motorcycle trailer for our road trip and he was extremely curious! I absolutely recommend this location

The location was fine, but the app and customer service from Uhaul was deplorable. Nothing worked correctly, and my husband had to wait 40 minutes at his pick up location before he was finally able to take the truck we rented. It was a very stressful experience on our moving day. We will not be using Uhaul for any future moves.

Was closed so no chance to enter inside. Outside and entrance average condition.

My mobile service wasn't great at this location, so online return was slow and difficult. I think the charge for Uhaul to do it the next morning should be removed and available as a free option.

I requested a 10' box truck, but was converted to a 9' van. This limited my moving capability.

Oh so much. I will be emailing.

Comments about. This place was a dump and it was confusing where to drop the keys.