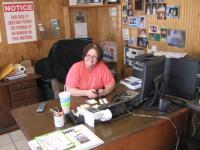 Drop off was very easy.

This rental site went above and beyond what is customary for a uhaul service. No improvements are needed.

The vehicle needs maintenance. The check engine light was on and a picture of a wrench was also displayed on the instrument panel.

Kacy was wonderful. We had the â€œno contactâ€ pick up option and it was not working. Kacy was there and she was able to get a frustrating situation a positive one

Keep up the quality service that you provided me.

Kacey was very friendly, kind and helpful her customer service was amazing and I will definitely recommend this location to my friends and family.

I found the staff to be the same way extremely friendly and personally interested in the customer needs. I would definitely be a repeat customer ??.

Did not have all equipment I rented--had to locate appliance dolly myself via the national Uhaul hotline. Truck was "sticky" -- had to disenfect the steering wheel 2x to remove the stickiness.

Call or drop by to reserve rather than using the website. Options were available that were not online. So easy!

Arrived right at closing. But was taken care of very pleasantly.

I had reserved online six blankets and hand truck (Appliance dolly) along with the 20' truck.. I reserved the things a few days ahead of time. I called the day before pickup to confirm all items would be there (due to poor online reviews of the location). I was told the truck, dolly and blankets were available and everything was good to go for pick up the next morning. When I was dropped off I thought everything was good to go. THERE WAS NO APPLIANCE DOLLY available. No concern from the lady there. She told me I could call other UHAUL location in the area to see if they had one. I ended up going roughly 10 miles out of my way to get a dolly from another rental company at 99 cents a mile in the rented truck. The UHAUL (non-existent dolly cost would have been $7 UHAUL. It cost $15 from the other company. I had a dolly at home (NORTH ALABAMA) I could have brought but believed it was worth $7 to not haul it 300+ miles to Jackson MS. The woman did not care. "Hey, I just check them out and in." I want to know why I was allowed to reserve something THAT WAS NOT AVAILABLE? My wife and I traveled 300+ miles to get our daughter out of an abusive relationship and were on a schedule that required us to have all we needed to get her out of that house efficiently. This was not the fact by not having everything we needed (that I was allowed to reserve BUT WAS NOT AVAILABLE). There was a small added cost, about 5 miles and $8 more to get the dolly we needed, but the search time and inconsideration of the lady, THAT JUST CHECKS THEM IN AND OUT, was very sad. I will NEVER USE UHAUL AGAIN. Regards Bottom line. YOU CANNOT RELY ON BEING ABLE TO GET ALL THE ITEMS YOU RENT AND "CONFIRM" AT THIS SITE. If you are in a situation where you need it all, DO NOT USE THIS LOCATION.

Justin Stockman 4/23/2019 U-Haul Experience the Month of April: I first reserved my equipment 3 days or more in advance at the U-Haul location on Veterans Memorial Highway in Douglasville, Georgia. I was told it would be ready at 11 am on Thursday April 11th. I reserved a 26 foot truck and an auto transport for my Toyota Tundra. Upon arriving I was informed that the lady I spoke with was not there and was on her way but they were not sure where she was coming from or how long it was going to take for her to get there. After waiting, not sure for how long, she showed up after 11:30 and started setting up her computer. After 12 o clock she informed me that the equipment that I reserved would not work because the â€œU haul systemâ€ said I had a Buick to tow when, in fact, I never said anything about a Buick. I have a Toyota Tundra and it was clearly explained and accepted over the phone when I talked to her. She made a phone call and 30 minutes later she told me that I could go over 1 hour out of my way to another location and pick up the equipment I needed. Without much of a choice, I accepted and drove to a location on Fulton Industrial Boulevard. When I arrived at this location, I waited my turn in line and the guy was actually very helpful. He quickly informed me that he has not received any notice of me coming for equipment and he does not have it. He proceeded to quickly make a call and I was informed that U haul does not even provide equipment large enough to transport my truck. So, at this point I have to re-evaluate the situation. I paid someone to drive my truck, go back to the original location on Veterans Memorial Highway and to pick up the auto transport that could transport my helper's vehicle instead. When I picked it up, it was hooked to the vehicle incorrectly and the chains were gone when I arrived to Mississippi with a vehicle on the trailer. NO safety chains were attached due to them being dragged off on the road. Since I was not charged for the chains and was able to work it out getting my truck to Mississippi, I did not report any of this. The next weekend on Friday April 19th I picked up a trailer from a Fairburn Road location about lunch time to finish taking my things to Mississippi. After I fully loaded the trailer and got back on the road, everything seemed to be going smoothly until I get roughly 45 minutes away and noticed that I was being followed by a cloud of smoke that appeared to be originating from under the tires of the trailer on both sides. Around 3 o clock, I called â€œroadside assistanceâ€ and told them what was going on. They informed me that someone will be coming out and I will get a call soon with their ETA. After 4 o clock, over an hour later, a guy shows up with a flat tire that I ended up having to provide a plug kit for to fix. The roadside man informed me that he works on 18 wheelers and does not have much to fix u haul equipment. He stays for what seemed like another hour and a half making calls and

No cause when she's not there the gates are locked!!! due to its a storage facility and you cant get in or out.. you cannot drop off unless shes there!!! I want compensation!!!

Drop off location not clearly I D'd

I had difficulty pulling my boat into the storage off Old Fannin Rd when the gate was closed because I could not get completely off the street, out of traffic, while opening the gate.

My storage unit was broken into February 2018 and all items were stolen without the management ever contacting me or secondary contact who lives in Laurelwood neighborhood beside the storage facility.

Need back up staff in case of illness or other absences

Excellent service with staff present being very helpful despite trying computer issues. Came in early to location so that I could drop off truck before I had to go to work. Will use this location again.

I signed up to pick it up in Pearl on Highway 80. It wasn't there. Had to go out of my way to pick up the truck. The location was nice and the lady was nice, but that wasn't the location I signed up for. Then I got a text message while I was trying to load my stuff up. It said I was to drop the truck off in Magee, MS. I had to call uhaul and be on hold for a long time, because I WAS NOT going to Magee. I signed up for Raleigh. So both locations were really nice, but uhaul was a hassle.

Focus on getting customers needs serviced without delaying customer with personal conversations.

Nothing. Old Fannin Store & Lock always takes such good care of us. They are easy to work with and always professional. Thank you!

The attendant whose name I don't remember was extremly knowledgeable and personable.

very helpful ease of drop off

I rented the truck to move items into one of the storage units at this location. It was very convenient to be able to get the vehicle on site and of course return it to the site after its use. The personnel at Old Fannin Road Store & Lock were very helpful.

Tracy was very helpful, friendly and knowledgeable. My son and I had a great rental experience.