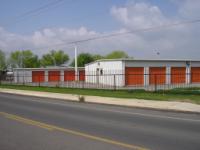 Faster service at the desk. Stood in line for ever, it seemed like

The pick up location is inside a mechanic shop. Not the worst thing, except I had to wait for the customers in the shop to be addressed before I got to pick up the uhaul truck (waited 30ish minutes). I then had to follow an employee to the storage place to get the truck. Upon opening the back of the truck, I noticed the furniture pads and appliance dolly were not in the truck. I called the pick up location, and the owner told me I had to drive back to the pick up location to get the rest of the stuff (he did not tell me that before I left the shop). Overall not the best experience.

The truck driver side door didn't seal all the way. Truck was pretty loud inside the cab? That particular truck.... seems to be on its last leg. Overall, I really like using Uhaul.

The drop off location was closed because it was a Sunday.

Nothing, Andy's group is a great bunch of guys ,and i had not one problem with those guys

The running lights on the trailer didn't work. I think it damaged the wiring on my truck. I had to drive at night with the flashers on. I didn't catch it as the other lights worked. The interior needed to be cleaned and the drivers side fender was damaged and needed to be replaced.

The blankets were not completely clean. Many were full of grass, about a half dozen (out of 24 total) had AXLE GREASE globs or smudges on them. Other than that everything was good.

Rude Rude Rude people. I've been here Several times before and had hoped to never go back honestly well I Reserved my trailer online this time and put in a different location so I wouldn't have to deal with these people and somehow it told me to pick up here once again. Well I decided I'll go in with an open mind and hope for the best and sure enough once again just not a good experience it takes forever for them to input anything and they get distracted talking to other people about nothing important just making conversation when Im sitting here and already been waiting for 20mins and I'm in a hurry at the front desk and he was in the middle of helping me but would just stop to have a Conversation with someone and literally threw I mean threw my drivers license on the counter back at me this place is ridiculous and the worst customer service ever you get treated like crap. I definitely will never ever be going back and hope maybe Uhaul has higher standards cause this place is a joke

They do not maintain the trailers and I had to pay to have air put in tires and the back lights did not work.

Rude and impatient. Called 20 mins before pickup time to hurry me along because he had â€œplaces to goâ€

Truck had trash and previous customer invoice in it. Tank half full. Windshield dirty.

Carlos and Andy were awesome!

It was closed... Christmas Eve

We delivered uhaul at night so we didn't get to walk into the building. We left uhaul key in drop box.

Very helpful and chose a truck with low mileage due to our lengthy trip. I really appreciated the thoughtfulness.

Fast and easy drop off

They had the equipment I need, help me hookup the trailer & I was able to drop off the trailer after hours. I will used them again and again.

Was promised certain things from that location and now am going thru a billing issue where I'm being charged more than agreed prices. Also at that location I was told I couldn't take a certain truck for a one way drop off I had to bring it back to that location if I wanted it.

I'm so grateful to uhaul! We were late returning our trailer because we couldn't get past Houston! Uhaul waived additional fees! Thank you so much for understanding our predicament! Very thankful!

This location was very professional and had the correct help available for me the customer for unhooking the trailer.

Bad attitudes very indifferent and entitled. Gave me truck with 3/4 of a tank and expected me to return it that way in Houston. How is that suppose to be? Guess work? Trucks mirror broken, couldn't back up safely.

The device that holds the ramp in place on the car transport Trailer was broken. There was nothing to hold the ramp securely in place.

I called Uhaul twice before my scheduled pick up date, and upon arrival, they still didn't have the correct number of furniture pads I had requested. The pads that they gave me were mildewed and smelled horrible. I was also told that I could drop off the truck/trailer at any location. This was absolutely not the case when I was sent a text notifying me of a specific return location.

They did a great job of hooking up and having the trailer ready while I completed the paperwork.

I think I all have it all figured out ! Hats off ! To you all !! Tks again

When offering a callback 3 days prior to reservation actually call 3 days prior not the day before. Have a way to deliver trucks to pick up locations. I requested mine and had to travel 100 miles round trip just to get my equipment "I lost a day" just getting the equipment.

For the record, I had several questions I was waiting to ask in hopes he would answer them in explanation. There was no explanation. When he finally spoke to me and asked for credit card, I asked for the total price, he said, "whatever they quoted you, it won't give me a total until I create the contract." So I replied, "I didn't get a quote, that's why I'm asking and I also was hoping to use a coupon code I have." He said, "oh, you should have told me before I ran your card, I can't add the discount now, it's too late." "But you still haven't given me a total, yet you ran my card?" I replied confusingly. He just talked in a short circle about the code only applying to products not truck rentals yet never even saw the code. Nevertheless, he handed me my card, keys, and a sheet of paper. I asked where to sign and he said I didn't need to sign which again, I found very confusing considering he just spoke about a contract. So for my protection I would like it noted, that is NOT my signature on the attached document, I can prove with my drivers license. I also asked if I could specify where I would like to drop off the truck once in San Antonio, he said no, I could drop it at any uhaul location and offered nothing else. I had no idea about the gas or mileage requirements, I only found out later from my brother who was helping with the move. I'm very disappointed with the service at 441 S. Getty and I will not recommended or return for any uhaul or other services.

My truck was there but there were no car transports in the entire town and I was told that UHaul does not care and would not send any our way. If I wanted one, I had to drive 90 miles to the nearest one. If my reservation is confirmed, then the equipment should be verified beforehand. I will be using a different truck-rental service in the future.

When trailer was picked up it had a low tire that had to be aired up. Tire kept going down and when I could not get in phone contact with UHAUL an employee at A&A Tire in Kerrville Tx called someone and got a PO. I was sent out of Uvalde with a bad tire that had to be replaced.

Make appointments that are set for the given time. Also, ensure all equipment that is rented is included in the uhaul.

Carlos was the guy who was at the counter. His demeanor was rude. His tone in his voice sounded as if we were stupid and he was superior. The uhaul we rented was at a different location about .5 miles away.

I probably wouldn't recommend this location..they didn't have much room for dropping off or picking up. Nothing on door for customers after hours ..I found the key box by wandering around. By the door would make more sense you would think .