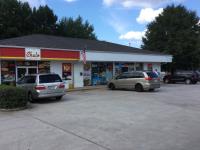 This was the worst experience ever using U-Haul.

Stop having customers pick up from vendor location. The trucks are not mechanically checked over.

Can't say it was bad

We were told we would receive $50 if we picked up a trailer and towed it to our drop off location. We arrived to the location for pickup and the sales associate informed us the stores had a mix up and the trailer was not there. We showed her the message and pictures from the associate who told us to pick everything/ scheduled the appointment. Needless to say we drive out of the way and there was no trailer there. We had to pay for the miles after U-Haul told us we would be compensated for picking up a trailer that was never there. Very disappointed with the service.

Nothing the service was great

Window shield was cleaned at all!

The truck was not processed back in until Monday when it was returned on Saturday before they establishment closed and then I was charged an additional $20 when I was given an additional 20 miles due to the initial location that was booked not having the truck I needed.

First person to "help" me was rude and dismissive.

I did not get the location where I was to pick up my truck until an hour after the pick up time. The location I rented from informed me where to pick up but had no idea where it was or how I could get in touch with them. It took me an hour & a call to ATT information to find it. Then another 45 minutes to get the truck. The owner had to stop every few minutes to go take care of his other customers.

They got me in and out with no problems!

AWFUL service!! Not at all prepared to handle U-Haul customers.

Customer service was great no problems dropping off U-Haul. Thanks:)

Make sure equipment is clean and works properly. Ensure everything customer reserves is actually with the reservation

The process of renting the truck was easy and uneventful. Would do it again, if it wasn't for moving.... Only one detail: they didn't have the pads that I requested. But overall, very happy with the experience

It's not the place I'd recommend. It's a gas station and convenience store. Very little interest, if any, in the truck rental business. An ok location to drop off, but that's all.

Be more professional, inspect moving vans before purchasing out, as well, mark for gas hand (was accused for not returning the gas, I have proof of the gas hand before moving the truck of the parking lot as well as when I returned It, and Still Was accused for not putting more gas in and I did so, actually put It over full. Very unprofessional!!

Didn't have an appliance dolly, but it all worked out in the end

I was over charged. It took an hour and a half to get the truck and the manager was very rude. He didn't seem to know what he was doing. I would never recommend this place to anyone.

Well i was charged for equipment i did not have nor use and i tried to tell the person it was wrong and they processed it anyway so i was charged then i have to call the 800 number to get my money back. The one who rented to me was great but the one who finished it when i returned the truck was not well informed. Dont know that i would use this particular rental place again.

That was the WORSE HORRIBLE LOCATION. PLEASE REMOVE UHAUL SERVICE FROM THAT LOCATION.

Customer service and getting the reservation correct the first time around.

I can't say that I'd recommend this location for pickup. The man running the store wasn't exactly rude at pickup time, but he spoke quickly and shortly, making it hard to understand him. He was rude the night prior to my picku. I called to verify my appointment. I had a couple more questions after we spoke and he verified the time. However, he saif "Ok bye" quickly and hung up on me before I could get to my next questions. When I tried to call back it went straight to voice mail. I got the impression that he didn't have time to fool with me.

Owner showed up late to open the store, then took his time opening and turning on the gas pumps. Two of the pumps didn't work, frustrating. I wouldn't recommend a gas station, stick to the u-haul stores a storage company.

This is not the location that I booked my reservation for but uhaul had overbooked the location on Forrest hills. The manager there was very helpful in locating me another truck at a different location.

Same as pick up location. He was very helpful and answered all the questions I had.

Price that I paid was more than the estimated cost for miles.... For example I estimated 75 miles of travel. And I drove 77 miles. There was a price difference of 13 dollars and clerk at counter couldn't explain why. Should have been a 2 dollar difference. I felt I got cheated out of 13 dollars. I put the exact same gas back in the truck

The trouble was with U-Haul support. Reservation pick-up had been changed. The store did not have the size truck I reserved. Price of the original rental was not honored. After 45 minutes on phone with 3 different people 1-800 uhaul would do nothing. I paid $50 more for a smaller truck. This is not the first time something like this has happened but it will be the last for me anyway.

To cut down on wait time, hire more staff to serve customers.

The clerk was the only one in the store and he had to take care of customers and me. He had several computer issues and it took him over 2 hours to check me out. This has nothing to do with the location I picked up the truck. The truck was difficult to drive. The steering seemed loose and at slow speeds like in a parking lot the power steering would stop working. Also on I-20 in Georgia the truck cut completely off. I was able to get it off onto the shoulder of the road and after a minute or so I wad able to restart it. It was NOT a good experience. I will probably not use Haul again.

He had a rough time with his computer equipment. He was never able to print but the attendant was very kind and respectful. We had no issues with him.

Personal professional and very congenial. Would definitely rent from them again!!

When i got there the store was closed

It was corporate employees that made my life a living hell.

This was my second time renting a U-haul from this location, the gentlemen that assisted me appeared to be nice but wasn't honest. Upon returning the U-Haul I explain to another guy who appeared to be much younger than the first guy who was much older than he. The younger guy was very cold, in considered, nasty, tried to be hard cord by telling me that "that is your problem that you filled the gas tank up to full. Too bad, your lost" I tried to explain to him that as I was getting gas at his location the pump kept reading not half full, the gas gage was reading not half full, so I continue to put gas in the car until it was over $40 dollars and I knew then that either something was wrong with the gas pump or the truck gas gage. As I tried to explain to the guy to reimburse me or deduct from what I old, he was very persistent on being rude, nasty, and unprofessional. I told him if he didn't accommodate me, I was going to call the police. He said "I don't care, and get out of my store." He never asked for the key, or the returned mileage. In addition, he never gave me a print out of what the difference in mileages were. I waited outside until the police arrived and explained to them what took place. The police waited for me and the store guy to finish the transaction. The first guy (older man) who assisted me originally told me that $100.00 + 10.00 for equipment will be automatically deducted from my credit card. The total came to $221.00 and the second guy tried to get me to pay an additional $91.00 and some change. I tried to explain to him that I only owe you $121.00 not $212.00, so it took him a while to fix or accept the fact that he was only getting $91.00 or $112.00. My experience with him was horrible. I will never be back and will tell my friends and family members not to stop there at all.