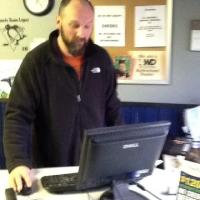 Nothing at this time

I can't rate this location because I didn't interact with anyone. Customer service on the phone (Emily) not so helpful, gave incorrect information & didn't care to address my concerns with this drop off location instead left me on hold for 46 mins. However at the end the manager at my pick up location still made my experience a good one.

Parking lot was small and had a couple vehicles already in the free spaces. Only other spaces would obstruct overhead doors.

The location was not open when I went to pick up the truck.

Please reprogram the Uhaul website to not automatically add hundreds of dollars of accessories and miscellaneous items to the cart. This is an obvious ploy to attempt to trick people into spending more money and I found it offensive and distasteful. "That Stereo Shop" was very professional and helpful and I was very pleased by the positive customer service and the cleanliness and maintenance of both the truck and the utility dolly I was rented. I would go out of my way to rent from the same location again in the future.

Explain pickup might be another location. Then also expect responsibility if you say you would help. Such a cold response from phone people when told I need to go to the other location. Will never use uhual again and will tell others the same.

The trailer I rented was the only uhaul equipment at this location. Nice people, but this would not be a primary location I would use if given a choice

The rental was quick and easy. The truck was ready upon my arrival. After hours drop off was simple and the customer service was great.

It it inconvenient to not have access to additional moving equipment. I called in advance to ensure a dolly and furniture pads would be available and when I arrived they were not. Associate at the stereo shop was helpful in securing the item from other uhaul vendors nearby for me.

The gentleman seemed a little distracted. When the rental is located within another business, one must be prepared to wait.

U-Haul schedule me to pick up the truck in Cranberry PA but when I got there a truck was not available. The dealer in Cranberry called U-Haul and said that they would e-mail me with a new location to pick up a truck. This was useless to me since I did not have internet available in a parking lot of the rental place ! I called U-Haul and they found another location for me to pick up a truck. It was 20 miles further away ! I had to pay to for the extra miles !! I was very disappointed with U-Haul and will certainly NOT be doing business with U-Haul again. I lost time and money because U-Haul could not coordinate and schedule properly.

the gentlemen who signed us out and checked us back in was fantastic, what great customer service he gave. 4 stars in my book!!! I would pass up the one down the street to go to him next time we need one.

When i returned the truck at the dropoff station, the man who took care of us told me that we kept the truck for an extra day. I had to show him my original quote for 2 days and 240 miles, I also showed him my contract were it was hand changed to 2 days and initialed by the pickup store person. Neither place could explain why my quote said 2 days and the contract said i had to return it the following day. I wasn't charged for the second day. The dropoff place said he would take care of it. Other than that our trip went well.

My trucks gas gage was not working properly. I put 15-20 dollars extra into my truck because it wouldn't move to 3/4 a tank. After putting gas in 3 times at 3 different gas stations and the needle not moving one bit, it finally jumped up to a needle below a full tank. Not very happy with this part of the U-haul service

A staff member came out and met me at the truck door as I pulled in. He gave me a "welcome" greeting when I stopped. He was very professional and my checkout was less than 5 minutes. I was impressed.

There was some confusion when my family member from out of state paid ahead of time. That info didn't make it back to the store and we were held up 45 minutes. I did try to call the store itself the day before about pre paying and it was a cell phone with messages full.

It would be nice th have had some direction as to how to drop Uhaul after hours.

It was awesome. More clear communication about the drop off TIME would have helped. I was late.

had very little time to get a truck the size I needed but U haul found me one. The gentlemen at That Stereo Shop were just that , gentlemen kind helpful and pleasant. The only way to improve for the next customer would be to just let them take the truck free of charge. Thank you to the guys at That Stereo Shop

These guys stayed at the store late because I got stuck at work. They were great.

the gentleman that helped us was friendly and efficient

The guys at That Stereo Shop were great to work with. Everyone was curteous and really helpful leading me through every step of the process. I would definitely recommend them to anyone! Job well done!

The fuel was not needed I fuel at the bp less than 2 miles away the 60.00$ charge is a RIPP OFF!! The person receiving the truck would not look at anything when I dropped it off he just wanted the keys and see ya. I was amazed at the ease but instead they get you out of there so they can hammer your master card !!!

Jace and Rick were wonderful to work with. They were friendly, prompt and can tell they really like what they do. I will always go to Ohio River Blvd when in need of a truck! Thank you!

WELL I RESERVED A CAR HAULER AT THE GOLDEN MILE U HAUL 3 DAYS BEFORE PLANNED USE ON GOOD FRI 3-29-13.ICALLED GOLDEN MILE LOCATION FRI WHICH IS 5 MI FROM MY HOUSE TO CK AND MAKE SURE HAULER WAS THERE,REP EXPLAINED MY TRAILER WAS IN AVALON AT STEREO LOCATION. THIS APROX .30 MI FROM MY HOUSE .I DROVE 2 LOCATION HOOKED UP HAULER AND ASKED 2 LEAVE TRAILER AT GOLDEN MILE WHEN COMPLETE,PERSON INFORMED ME THIS WOULD B ADD CHARGE OF 80.00$ THAT I DID NOT AGREE ON ORIG. I HAD 2 DROP TRAILER BACK AT STEREO SHOP 2 2 REC ORIG PRICE I WAS QUOTED . THE CAR HAULR WAS SUPPOSED 2 B AT GOLDEN MILE LOCATION.I HAD 2 EAT ADD.GAS USAGE BOTH WAYS FOR EXTRA MILEAGE BECAUSE OF UHAUL .THIS WAS NOT A GOOD EXPERIENCE AND AM DISSATISFIED WITH UHAUL CHANGING ORIGINAL AGREEMENT AND TRYING TO CHARGE ME FOR THEIR CHANGE! UHAUL SHOULD HONOR ORIG AGREEMENT CUSTOMER ONCE IT IS PRINTED

poor phone manners. The lights on the trailer don't work. I was told they checked them before I left. would not recommend.

Just dropped it off. Sunday no one was there.

Everything went well - I will certainly use them again in the future and recommend them to friends.

When I originally called to rent a truck, I was under the impression that I would pick the truck up at the location that I called and asked to rent a truck. I also asked if I would be charged per mile, since I was renting the truck as a one-way rental. I was told no, it was a flat rate for 24 hours. Well, 3 days before my move, I was called and told that I would be picking up the truck in a completely different location 5-10 miles away. Then, when I returned the truck, I was told I drove 2 miles over my "limit" and would be changed extra. Like I said, I was told I would not be charged per mile. Also, I went out of my way to pick up the truck in a different location. And somehow, I end up paying extra money. Finally, when I was given the truck, there was barely over 1/4 tank of gas. I rented the truck to drive to another state, so 1/4 tank of gas would not get me there. I understand it's not a requirement of U-Haul to give trucks with a full tank of gas, but how exactly does anyone expect someone to put the EXACT same amount of gas into the tank when it has to fill the tank before even get on the road? Needless to say, I put more gas in the tank that I ended up using, and the truck was returned with just under 3/4 tank of gas. So in summary, I drove out of my way to pick up the truck, returned the truck with almost a 1/2 tank more gas, returned the truck over 15 hours early and I got charged extra money for driving too many miles when I was told I wouldn't be changed per mile. It seems to be that U-Haul is the problem here, not the location.

There were no drop off slips at this location for after hours drop off...i would have felt more secure if there had been.

Was after hours when I returned the truck. They were very prompt in getting my return processed had my receipt in email in the early morning.

The folks here were extremely helpful and informative. Made this whole experience relatively painless.

Young man at That Stereo Shop was very pleasant.