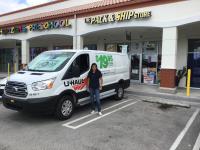 I called to let them know i had an emergency and could not return the truck at 11am the person on the phone said i was fine until 2pm when i returned it they charged me for an extra day of rental after offering it to me free of charge for those extra hours.

Price too high for a few hours.

Everything for us was great ! Just stay doing great job!

Customer Service Inservice to the employees at this location highly recommended.

We were given the wrong size trailer. It was an inconvenience because we needed to make an additional trip back to the store to fix the situation. We were offered no discount towards our rental when it was obviously not our fault that we needed to waste time on returning to the store to redo the rental. I expect to receive what we reserved at the time of the pick up. This made for an absolute unsatisfactory experience.

I ordered a 20ft truck in but ended by getting 15ft due to unavailability at my desired location. I also had to drive 10 miles farther to pick up. I had to change my moving plans by driving my personal vehicle 2 times to move my stuff. The staff were helpful and I understand things happen but it would have helped if I wasn't able to book a 20ft if it's not available. Overall experience with the truck was good at the expense of labor and mileage..

Nothing!!. Continues as it.

I had reserved a hand truck online 6 days before picking it up along with the van and when I went to the store there weren't any available.

Not helpful at all.

The truck was clean except for what looked like paint on both sides of the driving cabin .

Nothing really. You guys are good.

Excellent and professional office and I recommend to people

Customer service was great, friendly atmosphere. The truck was clean and comfortable to operate and use.

Price of .99 a mile expensive

I had to pay more money just because the store closed 20min before I got there....

Inside the cabin, was dirty with dust all around

The staff that attended me both at the time of booking (morning) and pick-up (afternoon) were very friendly and helpful. It was my first time using the Uhaul services and I will definitely recommend it.

They did a great job

I got confused with retiurning the truck in. There should be a clear big buttton when logging in to return the truck

I use this location for many shipping services. they are always courteous and helpful. Same for renting the Uhaul truck for my move. 5 star service!

The best customer service ever!!! People here are the nicest and most helpful!!!

Right now i can't rate the location. I was charged an extra day. I spoke to the managers Angelica n was advised they would look into. They charged an extra day bc in the return they added two extra hours. I have photos of the vehicle n time when it was dropped.

Stayed late to accommodate us when we turned in truck and were very helpful.

I recently rented a Van to move from Kendall to Downtown, Miami. Online, I selected ONE WAY; however, after picking up the Van, moving all of my stuff to Downtown, and then getting ready to return the Van, I looked up the address to the drop off location and it said I needed to drop it back off in Kendall. I was confused so I called the Downtown location I had selected and they didn't have anything in my name. I called the Kendall location and they had already closed as this was 4:30pm on Saturday, 4/20. When I booked it online, it asked me approximately how many hours I would have the rental for and I selected seven (7) hours. The Kendall location is only open until 3pm on Saturday and I picked up the Van around 10am. I was never told that 1) My rental was a LOCAL rental and would have to be returned to the Kendall location even after explaining to the guy at the counter that I was moving Downtown. 2) The Kendall office closes at 3pm and I even asked the guy what would happen if I had the Van for longer than the 7 hours I had selected online and he simply said not to worry about it because the rental is for the entire day. So, I left with confidence that I had more than enough time to do my move and make it to the Downtown location before they closed. When I called that location, the guy was not only rude, but was not interested in helping me at all. He just told me I was stuck with the Van until the next day. The problem is, the Kendall location is closed on Sundays so I was not only stuck with the Van on Saturday night, but also Sunday and into Monday until I could drop it off, conflicting with my work schedule. I was subsequently charged for the extra, unnecessary miles I had to drive from Downtown, Miami back to Kendall just to drop off the Van. This was not only an extra $30.94 (60% of my original rental amount), but wasted time I had to take from work in order to deal with what should have been a non-issue from the beginning. Every step in this process failed and I, the Consumer, am the one who paid for it in more ways than one while every UHaul employee seemed to not care very much at all to help or provide an alternative solution. I am LESS than pleased and I do fully expect to be refunded this amount. You can contact me directly at 732.788.8303 or my email at ADAMLARA514@GMAIL.COM Thank you.