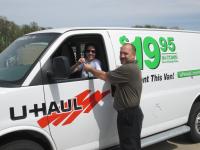 Vehicle was not in good condition . Charged additional for not checking in online while returning .

The truck reeked of smoke so bad. It was in my clothes. Please have a no smoking policy. I will think again renting from here in the future.

I think if every customer receives the dialogue and business exchange that I experienced they should be well satisfied . I believe you service personnel was named Faith, and she was a compliment to your service.

Easy pick up and drop off. Nice people. Iâ€™d use this location again.

Friendliness of staff is lacking

Very professional staff. Both people were helpful and courteous. I could hear them on the phone with an unreasonable customer and the gentleman was excellent he never lost his cool. we had trouble with the app and the guy at the store and the people on the phone work excellent with dealing with us. Had a great experience would definitely rent from you guys again.very accommodating.

I registered on line and provided all of the necessary information. When we got to the store we still had to provide all of the same information again. The online system should at least store part of what is entered.

My husband initially came to this location and was given a very hard time about renting a auto transport. He was lied to saying they couldnâ€™t rent him one at the time there was one available for rent. My husband then drove with my KIDS to a different location only to find out that the only auto transport available was in Somerdale where he originally went. I am disgusted with the service at this location in Somerdale. They are honestly a bunch of young lazy kids who didnâ€™t want to work to install the rental. I would not be returning to this location ever !

Stay as helpful and friendly as you currently are.

Getting the truck was super easy and painless. We were in and out in a few minutes. The truck itself was pretty dinged up but that didnâ€™t really matter much to us. Returning the truck was uneventful as well. The only thing Iâ€™d suggest uhaul do differently is to confirm all the charges upon return. There werenâ€™t any surprises when the bill was emailed, but I would have felt more comfortable knowing before I left the building.

Explain after hours dropoff. Thought I could do at home. Cost me $20 because I could not.

VERY poor all around... reservation confirm stated 8AM... they do NOT open till 9 AM ...wasted an entire hour waiting for someone to show up. Reservation clearly stated 24 hour res.. at 5PM same day (picked up at 9am) they charged me another day. Self after hours check on phone VERY confusing... they demand "location service" be active on phone .. yet do NOT explain how to do.. so you cant go past first screen.. then you need to take a series of pics on each screen... then finally bill was WRONG! Had to call customer service after wasting 30 minutes trying to self check out! Disaster will NOT use them ever again... PS Van was clean and nice... but totally NOT worst the waste of time and aggravation!

This isn't about this site in particular, it's about the rental in general. I would recommend that your policy be that the truck needs to be returned with a full tank of gas, not the level we received it in. It seems only fair. I had to fill up my tank as soon as I got the truck because it only had 1/4 tank and I had a long way to travel. Then, I ended up wasting money because I returned it with 1/2 tank because I had no idea how much gas I would be using. Making everyone return it with a full tank just makes it uniform and convenient across the board.

Hey! You guys helped us out so much. Having a vehicle ready and clean and at a reasonable price! We will definitely keep u haul in mind when we need to move big items again! ??

When I went back to keep the vehicle for another day, I had to wait quite awhile because the manager was trying to look up a receipt so someone could return an item that didnâ€™t have his receipt. He was the only one there. He was really trying to help the guy and was very nice. Just would have been helpful to have another employee there!

Location needs one more employee at the desk for when multiple customers come in at the same time.

My experience was great. The vehicle was ready for pick up. The staff explained the contract in full detail and I was told step by step on what to do when returning the vehicle after hours. Used the mobile check in app with ease. Just keep up the good work

$76 for a 2 Hour rental driving less than 20 miles is ridiculous. Your sales associates couldnâ€™t care less. You are not the only game in town.

I did NOT appreciate the service that I received. I asked questions before I decided to secure the return back to the same location rental. Although it made more sense for me to return it in Bridgeton, where my storage unit was, I agreed to return it there because the staff didn't put in the effort to try to make it work for me. I spoke to several staff (personally), from Bridgeton, and Somerdale, whom all gave me different prices, and information, so I decided to rent from there, which was a mistake! I was dropped off there in the pouring rain, and really had no choice by then except to do a round trip rental because I had just found out that I would have to have more money on my card in order to drop off in Bridgeton, it was too late to make a bank deposit, and i was NOT permitted to pay the rest in cash. Snow was also in the forcast, therefore, it made even more sense afterwards for the one-way return. I don't feel like the staff tried to work with me, or go out of their way at all to see if anything could be done. I had the ENTIRE deposit, but the rest was in cash. Had I not been given the wrong rates in the first place, I would have made sure to make a bank deposit ahead of time, so that I could make the ONE-WAY trip. My storage unit was in BRIDGETON, and I was making the MOVE to BRIDGETON (from Lindenwold), so of course it made sense to make a ONE-WAY trip, instead of two, which is all i wanted to do. I ended up having to keep the truck out an extra day because of the weather, and the fact that the office was closing before I could get it back there, so I stopped by to pick up my car, and let the staff know. The charge for the extra day rental was instantly held on my card, which I still DIDN'T have available in my account at the time because I had only more cash on hand. If it could be held then, why couldn't a hold been put on it from day one, in order for me to reserve a ONE-WAY rental?????!!!!!! I tried to explain that to the guy that called himself the BOSS there, but he was totally uninterested. #annoyedcustomer

The employee was not familiar with tax exempt forms and told me you didn't take them. And said they can't give out deals. I had to let him know he legally had to take it. And it wasn't a "deal".

The 24/7 truck share was not applicable even though the reservation I made said it was. Had to return to the site after they were open to get the truck. The windshield wiper on the passenger side was torn, needs to be replaced.

This isnâ€™t for the location but cruise control would be a useful addition to your vehicles.

The seat in the drivers side was extremely tight. I have long legs and it was uncomfortable to drive truck.

I always use u haul and this location for my moving needs. This time as all the others , everything perfect! Thanks Dan

Gas was on 1/4 tank. Our our first stop was to get gas. We were not happy about that.

Your people are great!!!

I was scammed by Uhaul with after hour return your system wouldn't let me check out so the next day I was charged $21.33 it makes no sense if I brought it back during business hours I wouldn't be charged you scammed me and I will bad mouth uhaul to whoever I can

We reserved the truck in Clementon and when we arrived to pick it up it was not available. No one called to let us know and we had a small window to do the move. We had to ask the girl was there a truck at another location and that s how we wound up in Somerdale. This is rude and inconsiderate. She acted like Oh well no big deal.

It is unfortunate that there was only one employee there on a busy Saturday morning. He was very good and cool calm and collected under the pressure of numerous customers. I wish I remembered his name because he was great under poor circumstances. U-haul should have a backup plan to have adequate staff on a busy Saturday. Otherwise the experience went well

It the best, I have use u- haul three time this year and three everything works out very well, Thank you Somerdale for your good work. Jimmie Wheeling

They had the equipment that I was looking to rent.

UHAUL has always been my first and only choice when I need to rent a truck or van. This weekend was for the church to deliver bicycles to a group that refurbishes bicycles and gives them to needy children. Thank you for your part in making this a great charitable endeavor.

I needed a trailer to take some of my things from NJ to FL. I had only enough things for a 5x8 trailer - so, naturally, the only thing I couldnâ€™t get was a 5x8 trailer. The smaller one would not work and the larger one (6x12) was double the price ... ($800 as opposed to $400). I asked the people at the two locations as well as dispatch to help find me a 5x8, they could not find anything anywhere. So I was forced into a 5-day rental for a half filled trailer I ended up delivering in 3-days for over $800. I asked the manager at the U-Haul if he would extend a courtesy and charge me for the smaller one under these circumstances and he refused. I am going to appeal to corporate but if they donâ€™t right this wrong U-HAUL will lose my business. Itâ€™s not like I was looking for a trailer size they donâ€™t make. If they advertise the size - they should be able to deliver that size.

Had issues with the app. Apparently it thought I had not taken a picture of the back of my license (even though the agent could see the picture when I went into the store). Would be nice if the app told you what was wrong and allowed you to take the picture again if that what was the issue.

I returned the trailer to the location the U Haul rep told me to. It was closed on Sunday at 12 Noon but I completed the form and dropped it in the box- uploaded pictures. THE GOODMAN neighborhood rental place charged me as if I returned it on Monday morning. I got ripped off for $28. I opened a dispute with U Haul rep