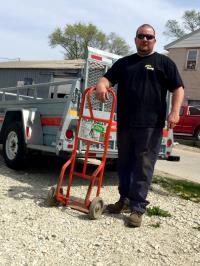 Once again, thank all involved in my uhaul experience

Well, guy was drunk/high, wear only shorts, was unclean, didn't even ask my name. Handed me the keys and we left. Poorly kept business, dirty and shady/creepy. Wanted us to come back at a different time so je could wake up first.

It was hard to find entrance to this place, when I found it individual was sleeping on floor. He hooked up trailer to car 10 to 15 minutes later trailer came of car on interstate , my wife's car was damaged from trailer hitting it

Honestly the employee was great and very patient with me if he wouldn't have been there I would've had no idea where to park or what to do, he pretty much took care of everything for me.

We went to take the uhaul back and there was a guy in the office asleep with a hitter and weed in his hand.

The staff was very kind and helpful.

The Peoria location was perfectly fine but the Galesburg location on West Main St. personally pissed me off. The lady was very rude and couldn't answer my questions.

Owner wasn't there when we arrived. Had to call him and then wait for 20 minutes. Didn't have all the equipment we ordered and acted like it was no big deal. Gave us a different item and said we could get our money back but at other end they acted like we were nuts.

Have the truck available when it is needed and charge only for days used. I used a truck for 2 days and U-Haul made me pay for 4 days. Rip off!

Dealer was hard to get a hold of, late of the time that was suggested

1.5 half until they could get to me. No contract given. Didn't know how to give military discount. Didn't know the process of how payment worked or what paperwork was supposed to be issued. Which made turning in the truck a 1.5 hour ordeal. Oh.... And it only had a half tank of gas when I picked it up. Would of been nice not to have to worry about that on the front end. Only thing they did correctly was park the 20foot truck with the trailer attached.

They had no idea what they were doing. I called the morning of the rental to confirm the reservation. Noone at JP's knew what I was talking about. I was transferred to 3 different people and eventually to UHAUL 1800 number. A representative from UHAUL at least confirmed for me that I did indeed have a reservation and called JP to make them aware. Noone could tell me when my pickup time was though. So I eventually just drove there to get the truck. Noone was there and the building is labeled very poorly. I had to walk down the street to ask other business owners where to go. I called JP towing and was informed they weren't there but were on their way. When I got there no one knew what to do even though I had a confirmation #, driver's license, etc. Eventually JP's brother decided he needed to drive my friend and me down to see a man named Corny so he could do some paperwork. I had talked to this man Corny that morning when JP's transferred me to him, but he acted like he had no idea what I was talking about and gave me UHAUL's number. So now I'm on my way to see Corny to fill out some paperwork. My friend road along in the UHAUL in the passenger seat. I sat in the middle area crouched on the floor. On our 10 to 15 min ride to South Peoria, JP's brother was friendly and did apologize for the inconvience. He also inappropriately took phone calls while driving us, screaming into the phone. One phone call we got to listen to him demand money from a debtor. That was interesting. When we're a block away from Corny's place, the guys back at JP's call to say Corny says he doesn't need us to come anymore and that all he needs is the security code on the back of my credit card. I assume he finally bothered to find my reservation while we were on the drive. I'm also forced to read my whole credit card number out loud to him along with my 3 digit security code. When we finally got back, I did get apologies, but really...it was like the 3 stooges. It was an awful way to start out an already stressful day of moving that was ahead of us. It was draining and even a little scary. If I hadn't had my friend with me, I'd have been very uncomfortable. Also I'm pretty sure the initial man I talked to from JP's was drunk. It sounded that way. His brother said JP was out partying really late the night before so he couldn't be there. I'm thinking it was JP I talked to with that first phone call. Having said all this, the truck worked well, and despite not knowing what was going on, JP's brother and the other men were nice and apologetic. Still, I'd recommend UHAUL stop doing business with this company. I've rented directly from UHAUL before and the experience is 100% better.

The location was kind of freaky. It was a towing company and there was only the one U-Haul in sight, no signs about renting U-Hauls or anything. I was not sure I was at the right place. I was kind of worried about leaving my car at the location, but it was fine. The gentlemen who took care of me were really nice. The only problem was that they were not ready when I got there at eight and computers were not working. I had to leave a copy of my credit card, which I was not pleased with. I had to go home and cancel it, just to be safe. The truck itself was great. Easy to use and well maintaine.

People were helpful, but the U-Haul computer system seems cumbersome and slow for timely service.