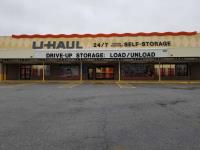 The door was locked when I first arrived we had to wait on an associate to arrive and unlock it. There aren’t any lights above the

Thanks to The understanding staff at this location

They made a stressful situation of moving several states away a little easier. The cost was by far the least expensive route.

Jue was amazing! I can't thank her enough for answering all of my questions and working around my schedule. I had such are hard time reaching uhaul by phone and was promised a call back by a supervisor that never happened. This was after trying to reach them for over 3 days and staying on hold for over 20 minutes. I emailed and was told I didn't have a reservation. If I wouldn't have had Jue to help me I would have been lost. She took the time when she was off to help me out since I couldn't reach anyone at uhaul. My review would be very negative towards uhaul if I wouldn't have received amazing customer service from Jue. She went above and beyond to help me!!

Everything went just as planned. No hassles. Thank you!

Wonderful experience all around!

Your team of guys did an excellent job! They were courteous and fast and respectful of our items. They are hard workers too! Thanks for everything! P. S. The people (Jue) at U Haul in Little Rock, Arkansas was very helpful and courteous too!

Everything went as planned. Very handsome and we'll spoken man helped me with everything. It was awesome.

It seems there was and error on my order and there was a one week delay. I don't mind but maybe add a realistic time.

Box was misplaced over the weekend it was scheduled to be delivered. Local UHaul managers Stephanie and Jennifer (hope I'm remembering names correctly) went above and beyond to keep me informed once box was relocated and on its way. My 75" TV arrived in perfect condition, which was the only item I had any concerns about. Cheers

UBox was packed completely full, but when unloading, items had clearly shifted in transit. Several items were damaged and broken beyond repair.

Outstanding service! My items were in storage four years. They are in excellent condition! Thanks! Alicia Banks

I actually used 3 locations to help with supplies for my move. They were all great. â€œJeuâ€ was great. Need more people like her in the work world.

I wasn’t informed on when I was supposed to pay my monthly fees. I called informed uhaul of this information the guy got smart after telling me it was due three days ago. Called back a lady handled it

The staff reached out to me several times and kept me up to date with the status of my delivery. Really can't think of anything they missed. Kudos to Chelsea who helped me.

Keep up the great work! My box came early so I could pack it right away and everything ran smoothly. They came to pick it up fast and I received my box with little to know complications. Everything was intact and nothing was damaged or missing. Thanks for the great service! Highly recommended.

I have used Uhaul trucks many times over the course of the last 25 years or so and I decided to try Ubox for my most recent move from Colorado to Arkansas. Other than the actual drivers who delivered and picked up my box as well as a couple of customer service agents, THIS WAS A HORRIBLE EXPERIENCE!!!!! The first issue started when my box did not ship on August 30 like it was supposed to. I was travelling and did not have internet access to check on my order. I spoke to someone on the morning of September 3 who told me that Ubox could not find a shipper for my box and that the box had not shipped yet from Denver. I called later that day to be told the same thing. Neither agent could give me any further information nor could they provide me with contact information for someone at the actual location where my box was being stored. I was told that I would receive a call from the location manager in Denver to see what the issue was and never received a call. I called again the next day, the 4th, and was told that it had, in fact, shipped on the 3rd despite the incorrect information I received from TWO different people on the 3rd. The second issue is that the WRONG credit card was charged on 2 of the 3 charges throughout the process. I had changed this card info online about two weeks before the first charge. On September 6, I spoke to Tina who was able to correct the first charge of $202.49. She assured me that all other charges would be charged to the correct card (Discover). My box was delivered the following day, the 7th, and my credit card info was not visible on the machine provided by the driver so the last charge was (again) charged to the wrong card (Mastercard). As soon as I received my email receipt, I noticed the wrong card was used so I called immediately to get it corrected. I was then bounced around to 3 different people on that call alone and, again, was told that a manager would contact me. I didn't get a call but was able to reach that manager at the number I was provided by the agent (when other agents told me there WAS no direct contact info for the managers). She took care of the charge immediately and was very pleasant and apologetic. I called AGAIN on September 9 because I STILL had not been contacted (as promised) by the local Denver manager to correct the first charge. (I DID receive a call but Jorge only said to "call the store" and did not leave a direct number to call. All previous attempts to call the store were forwarded to customer service). I was told the manager, Rich, was on vacation the whole week and that George (assistant manager) or Ann (executive assistant) would call me asap. In fact, Rich's first day back from vacation was the 11th which is when I finally was able to get a hold of someone at the actual store. ALL previous calls had been forwarded to customer service with NO option to speak to someone live at the location. I explained the situation to George (the assistant manager who answered the pho

Great service. I was not there on the pick up...but it came right on time. The delivery was actually able to scheduled earlier than planned which was nice and the young woman who delivered was so nice and helpful. She the only person I met in the process...but an amazing representative for the company! Wow.

The people here were amazing and went way beyond to help my husband and I.

Service was EXCELLENT! Ju was very accommodating and worked with us! I will definitely recommend UHAUL to friends and family.

My local uhaul location was very helpful, however the national call center was the most frustrating customer service experience I have ever experienced. I routinely had to wait on hold for 30+ minutes before speaking to anyone and then when I did speak with a representative they seemed nice but very poorly trained. Each time I called I was given completely different and conflicting information. I was also frequently transferred around departments due to lack of knowledge and was disconnected multiple times during these transfers, which required me to start the entire process over starting with another 30min wait while on hold. When making my reservation I mentioned the TV special to have a free month of storage and the lady making the reservation could not figure out how to add this to my offer (even though I could have done it myself by making the reservation online). She told me my local office could add this on. They could not. I called the national call center numerous times to have this fixed. There were no records of my conversation during which I made the reservation. No one had any idea how to remedy the situation. Finally my local uhaul location refunded the money and simply took a hit for the lost revenue. I would NEVER recommend uhaul UBoxes to anyone.

Jue was wonderful - very polite, helpful and extremely nice. Courtney was just as great - always available, answered all of my questions. What a great staff! Thank you for a good experience. .

He glad polite and nice

Great Customer Service, very friendly and knowledgeable staff, willing to go above and beyond.

Perfect. Service could not have been better. Very pleased.

Why do I need to give 3 cell phone numbers and two different addresses?

My experience was excellent. The facility was conveniently located and easy to access.

I loved knowing that my things was well secured and was inside the building versus those are outside. If it rains and you're needing something out of your storage, you're not standing outside.

Staff was EXTREMELY KIND, HELPFUL, and helped me with all of my issues... awesome ppls.

I rented for 1 month paid up front moved out before the next date of charge. I was still charged a late fee twice the people tried real hard but he service was horrid for 1 month of business prepaid.