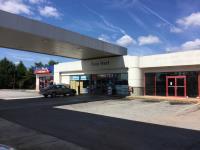 Nothing you service is excellent

This was HORRIBLE! THE TRUCK WAS DIRTY FROM TOP TO BOTTOM AS WELL AS INSIDE THE TRAILER WITH AN EXTREME STENCH TO IT! THE GAS TANK WAS ON EMPTY, I HAD TO TAKE IT TO QUICK TRIP TO PUT 70.00 IN IT! WHEN I CAME BACK TO DROP IT OFF, THEY WOULDN'T REIMBURSE ME FOR THE 1/2 TANK I RETURNED IT WITH AND ALSO WANTED ME TO TURN IT INTO A DIFFERENT LOCATION TO GIVE ME 22.00 BACK...I WILL NEVER EVER EVER EVER EVER EVER EVER USE THIS LOCATION EVER AGAIN!!!! DO YOURSELF A FAVOR AND GO TO THE ACTUAL UHUAL BUSINESS....I WAS OVERCHARGED AS WELL...

Nothing to comment about at this time. Everything went smooth.

First ther is cheating people out of there money. I drove only twenty miles and they charged me for 227 miles

I reserved online and went to the location to pick it up. When I got to the Chevron, the vehicle was ready and they gave me the key, but was instructed that I could not leave with the vehicle until I received my copy of the contract in my email, so I waited. I was told it might take a few minutes. After numerous attempts talking with the person that gave me the key, it took one hour and 15 minutes before I received that email. This is a very poor way to do business and the worst customer service I have ever seen for Uhaul!

When I went to pick up the truck, it had tobacco wrappers littered in the back and there was ash everywhere, including a pile on the dashboard. I also ordered two dollies which were not included in the truck, forcing me to drive to another location to pick them up. I understand that this is likely because the pickup location was changed by UHaul a few days before, but there is no reason I should have to spend my gas money and time to pick up something that was ordered over a week in advance.

Truck had no gas, got there and the truck size I order wasn't there and I wasted 2 hours and couldn't finish unpacking my storage

The lady who helped was nice but she was a gas station clerk. I uploaded pics of some of the truck it was dirty like someone was living in it. Hats trash in the cab and in the back someone left items back there. I initially booked another location only to find they never had a truck I was left running around looking for help I held like 1 hour waiting on uhaul 800 line to i Pick up. I will be disputing this transaction particularly due to my issues. I did speak to an agent much later but she offered no compensation only I'm sorry. I also booked my movers with uhaul and they were ghetto as hell. I can even believe they have them on the site as movers. I work with public and I never complain or call folks out but you all deserve this. Your service sucks!

The Uhaul that was given to me was very dirty and was missing a rear view mirror. When I return the uhaul the agent never came out to inspect the truck that let me know they don't care the condition of the trucks their renting out. Plus I was charged for coverage after I opt that I didn't need it. This experience has been the worst service ever. Last but not least they charge for a deposit when it never stated I had to pay a deposit when I made the reservation.I hope they change their service cause it's definitely unprofessional!!

I was confused at first on where to turn in the key. So I called the number and the guy said I had to come inside the gas station to return the key and I would receive an email. I was a little uneasy leaving the key with the store clerk, but he assured me that I was supposed to return the key to them inside the store. I felt okay doing that because I did see 2 other uhaul trucks parked behind the store. Sure enough, I did receive an email from from uhaul with my receipt.

The gentleman I picked my truck up from was very rude ! I reserve a pick up truck they didn't have any so customer care ask if I want truck or van .. I was agave a van and the guy didn't give me the van .. he was very rude and disrespectful... and I was over charge

Worst experience ever and I have used U-Haul a lot. Never again, at this point nothing can be done to change my mind.

The ppl was not nice and every unprofessional

At first, the gas station attendant, who spoke little English and didn't seem to understand much either, and who communicated via phone with the man in charge of the UHaul portion of the business, told me there was no reservation in my name, even though I was showing her the email confirming the reservation for that location. It took a trip to the main UHaul location to straighten it out. We finally got the truck two hours later, with no apology for the mixup. Everything was fine with the truck. All the extras (blankets, dollies, etc.) were in the truck and it was clean, but the customer service at the Chevron station left a lot to be desired. The man in charge should have been there to deal with it.

When I got there to pick up my rental. Equipment was missing, and I had to sift through all the vehicles to find the dolly that was at the location. I was told I wouldn't be charged for the missing equipment, yet I checked my receipt this morning and found out that I was. There was no customer service whatsoever. Never again.

The check in and check out process is frustrating. Even though I got there when no one was initially there they checked out people for about 15 minutes. I started to complain then they made me wait a while longer before assisting me. I would not rent from here ever again.

There is the Uhaul center that would have been much easier to work with, much more organized. There was nothing negative other than just organization of having a third-party gas station and the complications of that rather than a uhaul store.

This is a rip off. When I rented the equipment online my choice of drop off loca8was General Screven road in Hinesville GA. When I dropped it off at that location I called and told them and checked in the equipment. Now they charging me a fee for incorrect drop location. This is a Ripoff. I will dispute it with my credit card company. This is not the location that I dropped off the equipment. U HAUL got it wrong and is incorrectly and illegally charging me an unauthorized fee for incorrect drop off location. I never even been to Alabama.