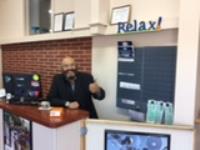 When you order a vehicle at a particular location you expect to go to that location and no other place. I had to rent a different truck because you wanted to send me to another location which I did not know about. Also I had trouble copying my driver's license to my phone and the guy had to use his phone to copy my driver's license that's evasion of privacy. I also did not get a receipt right away it took three days to get the receipt. I truly wasn't happy with this rental by U-Haul this time around.

Please ensure vehicles are properly disinfected and cleaned for next customer use.

Would be nice if someone showed you things about the vehicle

I didn't receive the text instructions. My rental was pushed back and the location was changed. The site were i picked the truck up from seemed closed at first. When the owner arrived he was very short and rude.

This may have been the worst display of customer service I have ever experienced. My reservation was made 3 days in advance (July 28th). On July 31st I did an early check in because it said it would cut down on my wait time. No big deal. I reentered all the information they asked for when making the reservation. When I go to pick up the truck at 12:15pm (pickup time scheduled for 12:30pm), the doors we locked and it said you were closed. I double checked the reservation to see if I had made a mistake about the time or address but everything checked out. There was even a 10' truck sitting out front. I walked around the side of the building and there was a guy in the window on the phone. He knew I was there but would not acknowledge me. Finally, I asked if I was at the correct address to pick up the uhaul sitting out front. The gentleman said, â€œare you William?â€ I told him I was not and that my name was Michael. He says, â€œso your not the guy whose mother I made a reservation with on the phone?â€ I said no and that I made the reservation online while holding up my phone with the order confirmation on it. He was two stories high and could not see it from that distance. He said he did not know what I was talking about and that the only truck he had was for William who was coming in about 2 hours. He said he could not help me because he was in lunch and to call 1800GOUHUAL. I had no success in trying to communicate with him that I had the correct address, pick up time, and reservation number as he would not come down to help. With no other choice, I reluctantly called 1800GOUHAUL. While this was happening, a guy pulls up and starts talking to the guy in the window. I can partially hear the conversation and find out that it is William. I join the conversation and ask if the truck is going to be leaving now. The guy said it was. I asked what the employee's name was and the response I got was, â€œwhat does it matter?â€ I said I would like to reference the person working here when I finally get through to someone. The response I got to that was, â€œit does not matter what my name is. You do not need it!â€ I asked and told him I would like a name just to reference the place where I was at. He told me this time that his name was Bob (keep that in mind for latter). I am trying to get ahold of someone through the 1800 number and William was slipped inside by the employee. After about 10 minutes of the two inside, he comes out and asks if my name was Michael (as if I had not already told him that). He then asked me to come inside and let William out. I asked what was going on with the truck. â€˜Bob' interrupted me and says, â€œdo you want the truck or not?â€ So I said I did and we started the transaction. He asked me for all the information that I had already entered online (not a big deal) and took my credit card and drivers license. Meanwhile I see a business card on the counter with the GM's name on it, Rusty. I take one of these for later. After â€˜Bob' is done with my license and credit card, he sets them on his side of the counter away from me and says that I can have them back. He didn't hand them to me. He didn't slide them over. He made me reach the whole way over just to get them back. He said the hold/charge would be $135. I knew it was $100 for the estimate I gave him and the $20 a day fee but I was confused as to where the extra $15 was coming from so I questioned it. He says that it is insurance and it's â€˜for my own good' and that everyone gets it. He was annoyed and angry. I felt as though I was in a hostile environment. I accept the charge and he dismissed me after the paperwork is filled out. As I am leaving I ask him if his name is Rusty the GM, to which he responds yes, he is. I leave at this point. I return the truck today and again, Rusty/Bob, is at the front counter. I walk in and he just stares at me. No hello, no direction. Just stared right at me. I told him I was here to return the truck and he says, â€œkeys?â€ That is it. That's all he said. I hand them over and wait while he is still starring at me. After 15 seconds or so I ask if there is anything else he needs from me and he says â€œno.â€ So I left. Honestly, if I had it any other way, I would have used anyone else. Very disappointed that this was my first experience with the company. I am helping my brother and friend both move within the next month. I would consider using Uhaul again depending on how this is handled. Please email me for a response: cardina.michael@gmail.com

Tried checking in online but kept getting errors.

I think that the U-Haul app was very tedious to use, and took way too long to work with. The process should be quick and easy...then I forgot my phone when I returned the truck; I was told that I would not check it in without the app. That needs to be fixed. I will rent a truck again from U-Haul, but I will not use the app unless a lot changes in the meantime.

Owner of AAMCO is a very questionable person of integrity. Made me 5 star him on google maps for his AAMCO business.

Seamless drop off. It was close and convenient. I have picked up at this location before as well

I would never recommend anyone to go to this place. The worst place ever. Tried to rob me for my money. Over charged my card.

Process was fast, easy and smooth. Highly recommend, will use again!

When I arrived for mobile pick up the truck I was picking up was blocked in from the front back and right side. I called customer service and waited on the phone over 20 mins to speak to someone before I gave up and inch my way out of the spot little by little and was forced to drive on grass and over a curb. Customer service time for 24/7 pickup is not adequate. I didn't get my truck until 30 mins after my pickup time and was late to where I needed to be.

Very friendly and helpful staff at our drop-off location.

Rusty was prompt and helpful. Have used this location previously and will be using it again for my next rental.

I needed to rent a truck immediately and the manager went out of his way to accommodate me on the spot. Thanks!

Absolutely nothing. This was my second rental in 2 weeks and could not have gone better! Thank you!

It was the consummate rental experience. Staff was friendly and professional. The transaction was completely quickly. The unit we rented was immaculate and perfect for what we needed. Great location. Great customer service. Fair price. Modern equipment. Honestlyâ€”what else is there?

Rusty was very nice at this location and very helpful

Not charge the account until the vehicle is returned like I was told. My amount was pending this morning and I did not return the U-Haul at the time.

The odometer was off and they charged me for 300+ miles. Choose Penske I'll never move with uhaul again!!!!