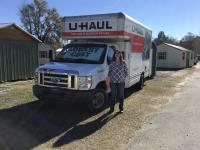 There are other locations in my area but I always prefer these ladies at this location because they just do such a great job. I love them!

They were very nice.

Nothing that I can think of. This was the easiest, hassle free experience I've ever dealt with. I am extremely satisfied. I NEVER give out â€œexcellentâ€ ratings. Well I can't say that anymore.

Arrived at location, at the address provided and were told to call when we arrived. We did so and were told we were at the wrong location. Even after arriving at the addressed provided by U-haul. They asked us to " drive across the street to the "cabin." However, there were 10 buildings and they all looked like cabins. The office sign is not visible from the first driveway (we didn't see the second one, or that it was a circle) so we waited a long while before we were assisted. No directionals, poor customer service and honestly, it felt as if no one knew what was going on. While on the phone with them finalizing the reservation that I had made on line, I was told, "OK, your total will be $278." I said, "Umm. I don't think so. My total should be just under $180." She said, "Oh, Ok." ??? After she finalized all the details, she brought us the key and we left. 5 minutes after my husband left the lot in the truck, he called me to say, "There's not a drop of gas in this truck. The gas light is on, and I don't even know if I can make it to a gas station!" When I called the office, they said, "Well didn't you inspect the truck before you left? We sent you a text message with instructions on procedures before you left the lot." Ummm. No I didn't know this, because I was on the phone with you the entire time trying to get a key. We had no idea there was action required on our part. So after we left the lot, I pulled up the text message and answered the questions as best as I could. When it showed photos of the truck and we had to "approve" said photos, it didn't even appear to be the same truck. Unless photos were taken at a different location. I'm the easiest person in the world to get along with, but there was nothing simple or pleasing about this process at all. It would be most helpful if employees, when handing keys to customers to say, "Hey, before you drive off the lot, please answers the questions on your phone (we sent you a text!) and if you have any questions, we can help." Not trying to be difficult, but this was not a smooth process. I also forgot to mention, when I called to say, "Hey! The gas light is on!" After my conversation with the girl who answered the phone, she then transferred me to Jay, who was helpful and seemed to know a bit more about what was going on. She said we were to return the gas with 1/4 tank and they would credit us $19. However, I never should have had to make any phone calls. All of this should be part of the process/conversation when the truck is picked up. In addition, but the time I was able to call my husband back, he had found a gas station and filled the gas tank. Which, by the time we returned it the following day, left it with 3/4 tank of gas. Not 1/4 tank. So you basically received a free 1/2 tank of gas from us and I would like a credit for this as well. What is the process to request this?

The COVID to go away and get back to normal and then your speediness can come back.

Drop off location was closed, I was a little confused with the on line drop off procedure but the call in person was more helpful

I was unable to pick up the rental prior to them opening so I had to wait until 9. Then the woman was new and could not work the program so we spent 45 min dealing with this issue.

No instructions on where to leave the key. I left it in the glove box.

The people were great. The equipment was very clean and operated very well.

The location was easy to find, but the driveway and holes were atrocious. The trailer ratchet straps were corroded and in desperate need of lubrication.

The truck leaked and got are boxes wet and ruined are 1000 dollar mattress. But uhaul only wants to refund use 200 dollars. That doesn't even replace the 300 dollars we spent for a temporary mattress we had to buy so we had a bed to sleep in. The truck leaks but hey not uhauls problem it's just are shot that got ruined.

Wet satisfied customer! Everything went great from pick up to deliver! U-Haul made it so easy! Thank you!

No one was there, however U haul had to call me to see where there truck was. They had not entered my drop off into the system two days later

The one tire was very bald, and made me nervous driving 1300 miles.

Keep up the great Customer Service

I don't understand why you go through the complete rental process including credit card approval, then you have to redo it again when you pick up the trailer. I rent autos and hotels all the time, you normally just have to show your card and sign the paperwork. Not a very clean system.

the staff is wonderful to work with!

The ladies, well they ROCK !

The lady that helped me didn't know how to do anything uhaul related. I had to walk her through it. She didn't know anything about the trailer

They are setting up, cleaning, and really beginning to get it going! Nice little place! Tons of potential!!

Always helpful at this location. I will continue to do business with them.