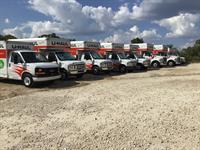 Uhaul had me drop it off 9 miles from where I was and there was a drop off 3 miles from me then charged me for the extra miles.

When i got there to pick up the truck i went inside the building and a man told me to talk to the guy in the blue car. I went over there and woke up the guy sleeping in the blue car and he gets out and tells me to hold on while he goes behind his car and takes a piss. He then goes and gets keys and hands them to me. No hand washing or even a squirt of antibacterial. I went to return truck and the same guy was there so I actually pulled back out and left. I guess the guy lives there because I drove by several times to return truck but he was there everytime. I kept truck an extra week just because I didnt want to deal with this disgusting guy.

Location provided on contract was in accurate. Delco Plaza and Wireless does not exist. Address leads to nowhere. Took 1.5 hours to do a turn in that should e taken 20 minutes tops due to poor information from U-Haul.com. No fault of the business at drop off location. At the drop off location personnel well very helpful.

The truck smelled like cigarettes and ashed were all over the truck.

Service was horrible and I'm being charged for mileage that was an error on uhauls part. They will be hearing from me.

The man really helped us

They gave me the wrong truck. Sorry - but it's tough to give you a good review at this time.

They did not seem to know how to process the reservation that I made online. Several phone calls were made. They were polite and apologetic

Apon my reservation was at 2 pm I didn't receive my rental till 330 pm . When I arrived the associate took me to a car on the side of the building where a homeless man appeared to exit the Vehicle that he was sleeping in the pee smell was awful I stood outside for 1.5 hours with a 2 year old in prefer to get this rental he then used his phone to call his â€œsupervisor â€œ Which wasn't at the facility and then proceeded to go into my contract . Today upon arrival the man in the same car sleeping and smelling of lee with the same clothes on from Sunday exited the vehicle to help us with our order it took about 35-40 mins this was a awful process and wouldn't recommend to anyone

Excellent customer service, through and thoughtful. Did a great job hooking up trailer and I had no worries, got the job done seemlessly and without much effort. Would recommend and go there again.

When a Loyal Customer such as myself who is a frequent renter I can not find any reasonable reason why I'm expected to travel to Round Rock Tx In mid day traffic on a Sunday afternoon after 3:30 pm. Pardon me for saying that I was waiting for a phone call from a knowledgeable sales person since I arrived at 2:30 pm I was not trying to be a jerk or seem like I was in a big hurry..the store that I cannot say a bad word about prior to my arrival SUNDAY honestly was gonna expect me to go to Round Rock Tx In afternoon traffic and load a vehicle and then travel to the mechanic who resides in Rockdale Texas and promptly returning back to the convenient store at 8pm. After I was denied the first time I'm still trying to get my mind around the fact that I pulled up in a 2019 Dodge Diesel Cummings and the last thing I was thinking about was being told I don't have a compatible truck I should have just called it quits for the unbelievable statement.. I just had to pay twice as much for a full size trailer versus the dolly that I was not trying to get in the first place. I say that to say this... I returned the trailer to the store today at 11:45 am to a closed building and a employee who is always in a security roll with the store for most of my visits was there to inform me that I was gonna get charged for another day.. I will pay the 20 dollars for the peace and I will pay Uhaul directly for all of my future transactions. I just wanted to be told that I was on a 5 hour â€œtripâ€ prior to my credit card being placed in fraudulent activity status which I will never be grateful enough for that peace of mind and protection. I was able to get my co worker to place the order on his credit card and the card was accepted..All I had to do was just grab my cash and pay him for a wonderful gesture, just to come to my last straw...The ATM WAS OUT OF ORDER FOR THE DAY... I feel bad that I cannot stop them from charging my friends card if they choose to do so... I will never be in a third party situation again because I'm coming to you guys personally! Thanks for your time.

Clerk was very polite and helpful

The lady didn't seem to know what to do. She got on the phone to someone else and they couldn't get my order complete and had to call John, a UHaul rep to come to the store to get my order done. This came after our original order at Bastrop Feed and Supply to pick up the truck was messed up because the previous renter hadn't brought the truck back. Our 8 a.m. pickup didn't occur until after 9:30. Then when I brought the truck back and went to put gas in it, the lady at Delco told me I had to put premium gas in it which I had never heard of before which I feel was just so her store would make more money as their gas prices are higher than other places. It would have been nice if someone had called the night before and tried to arrange another place for us to pick up the truck instead of waiting till we got there that morning.

Nice people there!! Everything is ok

I went online to reserve and make it easy to pick up. We got there and they had to call someone, we had to verify everything over the phone. It took about an hour or more for the entire process. I went during my lunch hour thinking i had done everything so it would be fast, i came back 30 min late from lunch. The truck was almost on empty, it barely made it to my house which is less than 8 miles away.