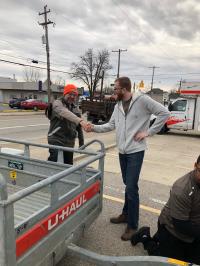 The staff at this location is excellent!

I told the location what I was hauling and they recommended the utility trailer. It was not wide enough at the opening to get atv inside. So I called back 30 min later and the guy said well you can get a car hauler and recommend another location that had one. At this time I'm crunched for time , I expected he would tell me to return the trailer with no charge since what he recommended did not work and I did not use it. So I rush to the west broad street location and told them what happened they rented me the car hauler saying my atv would fit . 15 min later I realized it will not fit as it's made for a wider car the bottom isn't enclosed like a trailer so the atv tires would partially be hanging off so it would not work either. So I immediately drove the car trailer back under an hr of renting it . I told the lady that was already outside it was to wide and would not work either, definitely expecting a refund at this point bc she clearly could tell by the time of return I did not use it. She just waved me into the spot to unhook it and told me she would email the receipt . So I found another rental company that had a trailer that would work. I used them that day as I was crunched for time already. And returned the first trailer back to the old Avery rd location the next day. And over the next 2 days I kept getting calls from the west broad st location asking me to return the car hauler? I stated on all 3 calls that I had returned it under an hr of receiving it. All I was told was well I don't see it I'm going to have to look at the camera? What kind of service is Uhaul Willing to give to the customer? I wasn't very impressed that day. Thanks for listening

The initial visit was great and that was what made this experience above average. The manager was super helpful and we had a good experience. However at drop off the person working wasn't wearing a mask... not even had one pulled down, just didn't have one. It made me feel very unsafe. If this had happened at pick up I would have demanded a refund and went elsewhere.

I have been going to this location approximately three times a month for about three years. Always courteous and friendly and knowledgeable. very efficient on getting you checked out and checked in.

During a snow storm I was charged $20 while returned before 12am by 12:45 I got charged it even though they were not open. Un-humanistic and greedy

This was one of the easiest transactions I've had in a while. Thank You

Kennelly Lee was outstanding.would appreciate it if someone could contact me. 614-352-7067. Scott Shaw

The employees were very professional and easy to work with at this location. I was very impressed with their customer service. This is one of the best locations I have rented from. Will use them again.

Employees should have had masks on the entire time. Otherwise, employees were helpful and very nice. Also the parking situation was terrible for both customers and maneuvering the trucks.

I rent from there alot until customer service was for shit, then went to georgesville road and they sucked worse, but this time it was great, things are looking up at central u haul,...

Buy the lot next to it. If more than 1 customer comes in then there is no where to park. I know it was a holiday but assign at least 2 people to work. The poor guy was trying to get ppl propane and still work the counter or prep a truck in my case hitch up a trailer. Don't make your employees a target for thieves

When returning the truck, there is a sign stating to remain in your equipment and with your equipment and someone will assist you in checking in. I waited for someone to assist me, and I waited, and waited and waited. There was an employee walking about in the lot, but did not communicate what they were doing and made zero attempts to interact with me. I observed this person checking in someone that came after me and then she went to the front of store and just stood there outside again not making eye contact or acknowledging me in any way. After having waited for ten minutes, I leaned out the truck and asked her what was going on and weather or not I was good to go. The employee told me that she had already checked me in and that she was just waiting for me to exit the vehicle. I told the employee that it would have been nice if she would have told me that. Instead of apologizing for the miscommunication or admitting that she could have been more clear in her communication, the employee told me that she was sorry that she didn't come and hold the door open for me. I pointed out that I wasn't expecting her to come hold the door open but I would have expected her to communicate with me in some way that she was finished. The employees response to me was that she was sorry that she didn't come up and scare me. I point out that she hadn't communicated with me at all. The employee informed that this was not true and that she kept staring at me. I reiterated that she had not interacted with me at all and again she advised that she was sorry that she didn't come hold the door open for me. I was furious at this point and asked for a manager. The employee advised me there was no manager on duty but I was welcome to call the store tomorrow. Since I've begun the moving process, I've spent at least $60 on boxes at that location in addition spending $60 renting the truck and additional $15 to put gas in the truck before I returned it. Instead of being treated like someone who has spent $120 at that location I was treated like it was my duty to spend my money there and that I should be lucky that I serviced at all. On top of that, I given misinformation over the phone when I tried to rent the truck to begin with. I was originally trying to get a flat bed truck or van and was told over the phone that I could pay cash for it. When I got to the location I was told that I could not pay cash and a major credit card was required. I was not told a credit card was needed when I called. I'm upset that the employee instead of acknowledging the miscommunication, decided to insult me in the poor disguise of an apology. The fact that this employee got smart with me is the driver of my complaint. I would not have been complaining otherwise. I was made to feel that my money was wanted but not my business. This is exactly the sort of behavior that I've come expect from a society that wants my money, but doesn't want to do anything to make me feel like deserve it. I have no expectation that you will make this right, or that you even care. I no expectation that you will care that you will lose my business anymore than the employee or location does. After all, the employee is still getting a paycheck weather I rent with you or not. Your company or the location won't care that they are losing money. What's my $120 when you have so many others willing to rent from you? I'm not done moving. I'm still going to need another moving truck. But I will exploring other options with other companies. The only way I would rent from U Haul again is if there are no other trucks available in the city. I would like to reiterate, a simple apology for the misunderstanding would have avoided this. I reiterate the fact that this person got smart with me is the sole driver of my complaint. I don't expect for you make this right. I don't expect to be treated better by another moving company, but another company hasn't had the chance to disrespect me yet. I will finding a corporate number and filling a complaint that way as well. I will not be contacting the location as I don't expect for them to care.

The guy who opened was so wonderful ( I can't remember his name) He went above and beyond!!

Great location! The manager Kenzel was super friendly and helpful!

Manager there made it extremely easy and quick to check the truck back in. He was super friendly and helpful. I was very pleased with his overall demeanor and helpfulness.

The older gentleman who helped me that day was fantastic! Very nice. Helpful.

The team was very helpful getting everything I needed to pull the trailer and put the hitch together and tested my lights. Were very helpful when I returned it as well. Great customer service

The truck was not in the parking spot that it was supposed to be in, so we had to get out of the car in the icy/rain mixture to locate it. We were also not provided an extra key for the back door lock, and had to drive back to the location to pick it up. While the drive was short, we should've not had to pay for the gas to come all the way back to pick up the key they did not provide.

My experience was great, however, there was a hiccup with a billing issue. The Manager Kenzelle took care of everything and resolved this situation quickly. He was also very responsive to my phone calls and his follow up was outstanding. Thanks! Lori Whisman

Excellent and prompt service from this location with a very friendly, polite and professional service representative.

I made a reservation went to the location to pick up my truck and Dolly from the beginning they wanted to add all these extra charges so I had to correct all the things they added without my permission. Paid cash upfront and when it was time to get my refund they said they sent a check in the mail into the driver that drove the truck name at my old address now they don't want to refund me my money in my name at my new address. So I never received my refund .