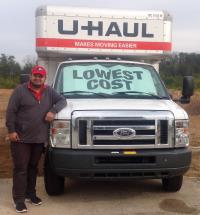 We booked a truck but it was not ready at the select location. We were asked to go to a different location. The first truck they gave us at the second location had mechanical issues so we had to return to the first location to rent a larger truck. This took almost two hours and delayed our move. There was a complete lack of professionalism in this rental so no we would not use Uhaul again nor would we recommend it to any of our friends.

The initial location I was supposed to drop off on Saturday was closed Friday at 4PM. I called and operator said he had new born so he closed early and i couldn't drop the trailer!! I looked and found the closest location which was 891 S Chestatee St. Dahlondega so I went there and they had left early. The Shell station said they left early and they thought it was ok to drop the trailer. I then called your Leesburg location and talked to the guy I rented from and he said to drop and the folks should check the trailer in Saturday morning so I did. THEN this week I'm receiving calls as to why I haven't returned the trailer?? Obviously this didn't make me happy!! There were no trailers or trucks on the lot when I dropped so you would think your people would have known Saturday morning that the trailer there wasn't there on Friday when they left early!!!

It might not have been the fault of Uhaul, but we dropped the truck off after dark, and the location was at a gas station in a very dimly lit area with sketchy people hanging around the key dropbox. If I didn't have my boyfriend and his dad with me, I wouldn't have wanted to even get out of the truck.

faster service although the lady clerk was helpful, because of employee problems, she had to work between the cash registar and my checkin

My pickup time was 8 am; however, there was no one at the store who could complete the process until 9 am.

I had asked for a hand-truck and they had none. Also after they had charger my credit card they told me they couldn't print my contract and receipt because their printer wad broken. Bad location and bad service.

Problems were abundant when trying to return the truck. After listening to a uhaul recording for twenty minutes my daughter finally got to talk to Deborah who explained that the 24hour drop off was experiencing a lot of problems. She noted that on my reservation. Then the next morning I received a new drop off location. I hope there won't be any problems when I am billed for the usage.

Move went smooth !. Thank God for awesome friends to help unload. Because, the hand trucks were missing out of the truck.

This location is a gas station. I think there should be a sign or let someone know to go inside to check in. Iv been at one before and they didn't know anything about a the uhaul. I feel there needs to be specific directions on that part. Weather it's through the app or not.

Have someone check the truck without me. Asking them to do so and ok it all in writing and putting their names on it.

Guy ay drop off blew me off, totally not helpful. Luckily I had downloaded the uhaul app when I was trying to get the reservation to go through and was able to do the return.

my original location was moved further from my home the day before I needed to pick up to this location, on arrival there I was told they did not have vehicle and I had to go even further and pay for extra fuel mileage. Very frustrating.

Easy in and out.

All I did was drop off the key to a nice guy. Couldn't have been easier.

Would recommend that they fill out reservation form on line to save time.

My truck had been driven through a hay field. The girl in the store didn't have a clue about renting I had to do it over the phone.

The location is a little confusing. It's a Shell gas station, so "mart" might confuse some people.

I was very uncomfortable dropping off the U-Haul at this location. I dropped the key off with the clerk at the gas station and was given no proof that I actually returned the truck on time (receipt, phone call, etc). I was called two days later by a representative fro U-Haul asking when I would be turning the truck in. I informed her that I had already done so and was waiting for my receipt.

Mart 24/7 was great. What I can't recommend to anyone is the very poor inventory management in your website. I WASTED over 1.5 hrs of my day, which I don't have and can't never get back, due to the lousy website. The site sent me to a UHaul location that didn't have ANYTHING available. A major waste of time and money for me. Have your IT and data people get this right; it is 2019, not 1989.

Second rate operation - not able to print out contract; delay in having the trained person there who complained about the earlier time - she was to arrive at 12 Noon instead of 10:00 (per request). Only person at the convenience store so clerk tended to other customers - to rent the truck took twice as long. Then, used some driving skills to get truck out of muddy parking spot.

I guess you have to recommend any location open on Sunday. The young lady was pleasant but not overly helpful. The gentleman working for her, was nice but had to be asked for help

They were absolute wonderful people to rent from!! I will tell my friends and family!