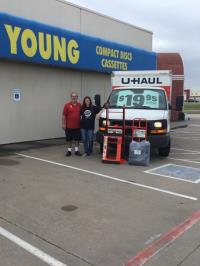 They were very polite, and since I'd done the check in online, I was in and out in 10 minutes. The truck was freshly cleaned, and he backed it out and got it ready for me to jump in and take off!

I made sure the Truck was on full when I dropped off. I was charged for it not been full. I didn't understand, something wrong.

Great experience! I'll use this place again. Very quick and easy check out and check in.

Really pleased with the service and equipment!

Customer service was Great!! Will use this location again. Thanks JE

Google maps wants to take you to a random intersection south of 20. Maybe get in contact with them to see if you can fix that issue. Everything was great aside from that confusion!

Get people with a better attitude

We waited for the guy for about 5 minutes although there weren't more than 2-3 customers, but they where there for records/cassettes/music stuff and there was someone on that side of it. The small Uhaul area was hoarderish looking with boxes stacked up as high as me and I'm 5'3. It was extremely cluttered. Anyways, he opned6his app or whatever, clicked several things, and asked if we had any issues with the truck and we said no. He clicked more stuff. Then said "I'll be right back". 10 minutes later?? He came in and said that the gas was at half and so there was a $17 dollar charge for the gas difference. My husband immediately explained why and what occurred at pickup. Then I said absolutely not, where not paying that extra and if it was gonna be that be of a deal we'll run up the street and put $4-$5 damn bucks in it and deal with the other place tomorrow (Monday). Then the guy said, "Oh well your card has already been charged, so I wouldn't worry about it." Ummm, excuse you?! It would have only been charged that way if while you where outside you hit a button indicating to charge us, so don't play like it was out of your hands. He had absolutely NO RIGHT to charge our card anything additional without speaking with us first. Common CUSTOMER SERVICE 101. Then when I told him he shouldn't have sone that, he basically said, "Well you can let the other place know and let them refund that or whatever they wanna do." Oh, okay, so y'all (both locations) did things wrong, by simply not COMMUNICATING with the customer or doing what you said you'd do, so throw the responsibility of your error back on the customer to fix...... Yeah, that seems about right. I will no longer use Uhaul and we've used them for at least 14 years. I'll go with another company moving forward. If you can't handle and address a simple $17 mess up to take care od the customer then I'll deal with a company that communicates with us first before just charging our card and playing dumb, like you didn't know what you did.

Get rid of the dude that helped me he was clueless

Link with U-Haul and give the correct rates and action on what's going to happen. I was over charged to go less miles than I went.. does that make sense?! No. I filled the gas back up left no marks and returned it well before the next day. Guy quoted me and said I wouldn't be charged more.. but yet here we are and the issue is still unresolved.

Their customer service was amazing .

He charged me a lot of money. I drove only less than 15 miles. The gas tank was 9/11 and he had indicated wrong figures. He ripped me off my money $20. I always use the Uhaul and this was the worst thing ever. He did not give me the contract for the first place. He emailed to me after I complained to him and he stayed in the car to manipulate figures

Was given wrong equipment and now waiting an hour at return place to fix the screw-up, because the attendant is on hold.

Have trained personnel. He clearly did not know how to rent out trucks. It took about 40 minutes to do it. With a reservation. Also have someone answer phone. I recieved a text stating that I had to call and confirm. The message on their voice mail said to call back in fee minutes i tried 8 times to no avail.

Provide the hours of operation

If I had been told this would uhaul was connected to forever young records, I would have never ever booked it. This was not mentioned. Location could not be found on GPS which held us up an hr. After many calls to uhaul we finally made it. Store is very dark & dreary. Windowless. Guy doing our contract paperwork was lost & confused & very unsure of himself. Music was so loud I couldn't hear 80% of what he said to me. Brake lights were not tested until we asked before he walked away. He had already told us we could go wo checking them. He did not even put in our location for drop off so that became a hassle too.

This location provided an excellent experience. Everyone I dealt with was very friendly and accommodating. At the end of my move I found that all of my stuff wouldn't fit in the moving containers I ordered. It was late in the evening and I couldn't find any open U-Haul locations until I found these guys. They really saved the day for me. Great experience all around!

Truck was great and people were friendly.however, the staff were inexperienced in checking a vehicle in. The guy that checked the vehicle out knew what he was doing but it took forever to get out the door. Between pickup and drop off I spent at least an hour at this location. Staff needs some training on getting customers out the door.

First time user at this location. Service was excellent. Will recommend to others.

Not at stated address.