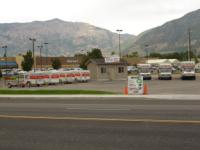 Amazing customer service, he was super informative and helpful. I have never had anyone in customer service show genuine concern and interest. I will always go to Shane for my uhaul needs

All good. I was in and out in 5 minutes.

There was no one there when we dropped it off

No one there on a Monday around 11am. Tried to call but number on door didn't work. I transported a u-box from cookeville Tn to Denver Co and was told I would get $400 off my rental. That still hasn't happened.

Very convenient for the north end of Ogden, easy to find

Do you sell the trailers?

Said keys were under drivers seat but they were up above the drivers visor.

Person wasn't there for pick up or drop off. Couldn't ever get a hold of them, uhaul even tried. Eventually after calling about 12 times in a row they answered. Voluntarily signed us up for added insurance that we didn't ask for.

Nobody around at time we both agreed to pick the truck up, then after returning the truck a few days later I was accused of not returning it by the U-Haul lost and recoveries. No more U-Haul rentals for me...

I wanted to pick up the trailer on Sunday, because of parking situation, ogden on Wall Street was my preferred location, went there and looked at trailers, and I agreed ti picking it up on Sunday, Got a call on Saturday afternoon that I had to pick it up on Saturday at a different location, and they were closed on Sundays, canceled my plans for Saturday evening to pick up trailer, I called 3 times trying to pick up trailer, but got a hold of someone in the main office, she was quite rude and laughed, saying at least you got your trailer, very poor customer service, and as she said ha ha,

The trailer was nice but it still had dry dirt on he bed floor that had not been cleaned out from prior use. The manager was nice and helpful and let us use a trailer better suited for our needs.

Rogers Eggs was 30 minutes late to the site. We waited way too long and he had a horrible attitude when we asked how we could remedy the situation.

He was awesome! Great Job!

Shane at Roger's Eggs was an absolute pleasure to work with. We were scheduled for self-pickup, but the app was not working and the customer service line was no help at all. Luckily, Shane happened to be stopping by the shop on his way up to the mountains and took time out of his schedule to help us. He had us up and running and on the road in no time. He was very professional and made us feel comfortable. If you're renting a Uhaul in Ogden, I would highly recommend scheduling pickup from this location. U-Haul themselves, however, have been nothing but trouble. I was having issues with the app since I first placed my reservation order. I called Uhaul on multiple occasions to express my concerns and they assured me over and over again that it would be okay, and that if anything went wrong at the time of pickup the customer service line would be able to assist me. Well, pickup time comes around and, of course, I can't get the app to register my reservation. I called the customer service line and was given the run around. They first tried to tell me that it was because I was entering the order information wrong (I wasn't), then that it was because my location tracker wasn't turned on (it was), and finally that it was because the email address had information on it that didn't match the name of the driver (that doesn't even make sense, but we tried changing it anyway and it still didn't work). Once we went through all of that, they decided they would try transferring me to another department. Luckily, Shane happened to show up to pick up some equipment while I was on hold, so that was the end of that. But if he hadn't showed up, we may have never gotten in to our rental. To top it all off, I'm now being double-billed. I have a pending charge for the reservation, followed by two pending charges in the same amount. They say it "should correct itself" in 3-5 business days. But that's 3-5 business days that I'm out an additional $170, and after an expensive move that hurts a little. If I ever have to do business with Uhaul again it'll be too soon.

Very friendly and helpful! Very unexpected circumstances, unfortunately, obligated my girlfriend to move on New Year's Eve. The panic of moving her and four children out in one single day was overwhelming. I searched for a truck in the more conventional locations and they either had been closed or out of trucks. Driving home after several failed attempts we saw Roger's eggs U-Haul. To my surprise the owner answered, explained to me that he was closed due to the holiday but after explaining my situation he was very understanding and very helpful. He opened his doors and started his computer just to make sure I had the truck I needed. Explained everything clearly and got the truck we needed, the process was easy and simple. Thanks to Rogers Ace U-Haul we were able to get the job done unfortunately we missed the fireworks show, but it was worth it because the day would have been a nightmare with out Rogers eggs U-Haul.

I believe we were over charged. We have fault for not verifying the charges before receiving the truck however it still doesn't make it right. I've never had problems with U-Haul but unfortunately after this incident I will no longer be using again.

The owner was very helpful and kind. I'll definitely rent from this location again and recommend it to my friends.

I waited for an hour for him to show up. Never answer his phone. Then he tried to charge me for 2 extra days on the rental.... DONT RENT FROM THIS PLACE!!! EVER!!!!

Make sure app works. Have someone available during business hours for help. Quote exact costs.