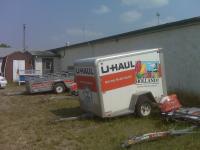 Friendly and efficient. Thank you ðŸ˜€ðŸ‘

I book 20ft. U-Haul but give us 26ft. , then not properly calculated the extra mileages but anyway thank you so much no hassle in moving, it's a great help.

Location & service were great. The uhaul website and interface were the real issues. But minor in the grand scheme of things.

The online booking service did not work for me. The rep was excellent and helped me with the booking.

Wouldnt give me full insurance so a saskatoon location could help me load and secure car on trailer. The ratchets were so gummed up that they didnt work properly, saskatoon guy had to pull really hard to get straps out, then went back inside. Then i couldnt get straps to tighten so went and asked for assistance he wouldnt help thats why i needed full insurance so somebody else could help cause i had no idea how to do this. Some stranger waiting came out and helped. I was delayed 3 hours because of this trailer. Then strap was was bunched up and wouldnt come out so i could offload car. Called uhaul was told to cut strap. I want to know how to file a complaint and request a refund. This was completely unacceptable. Had my 5 yr old child with me.

Lot was small and very muddy to get into

A jack on the trailer would be a great idea for hookups and unhooked operations.

I rented a trailer for Sunday morning. Went on line Thursday and changed it to Saturday morning. When I arrived to pick it up, was told my reservation was for Friday night and had been cancelled. They dialed the wrong number Friday night, couldn't reach me, so cancelled the reservation. No trailers were to be had in town. Had to make a 3 hour round trip to pick up a trailer. They didn't have the size we originally requested, so paid more for a bigger one. So paid gas for a 3 hour trip, paid more for the trailer, and wasted 3 hours of time we didn't really have. Not impressed with the whole situation.

I booked for a trip to Alberta and so I picked up and left.......I had to come back because I was charged wrong price. NOT MY FAULT... This was alot of wasted time I did not have; also an Additional $300!!! Was very open where I was going. I even booked ahead online and said I was going to AB but still was under a "in town" rate.......

When I was trying to set up my U-haul rental with various Uhaul dealers in Saskatoon (not the pick up location listed) I had a large number of issues ranging from multiple times not being able to find my reservation and telling me I did not exist in the system to making in person promises on availability and pick up times that did not come to fruition to having to receive my Uhaul from Humboldt, an hour and a half drive for me, because of how the system works. While I do not blame the majority of the front workers, especially the ones at this location in Humboldt who were not involved in majority of the interaction until the end at pickup, where they were good, I must admit Uhaul has one of the most archaic and unintelligible systems I have ever had to deal with. The fact that Uhaul dealers within the same province, let alone city, are intertwined via computers at the dealership level such that a customer does not have to phone around to multiple locations to try to find information on available trailers, existing reservations, in person conversations etc., is mind blowing given the age we live in.

You can honor an action file when it is put in. we are so disgusted with this we wouldn't recommend uhaul to anybody. We asked to be compensated for the drop off being so far and nothing has been done

Not about Kenway, but the reason we ended up using them. We placed our reservation on line in Saskatoon, only to be phoned immediately to tell us that the trailer we requested was not only unavailable at the location but that is not even used anymore. We had to travel an hour away to Humboldt to pick up the trailer. Then when we went to pick up the boxes we ordered in Saskatoon, we spent about 10 minutes searching for the employee. Not impressed with the Saskatoon location's poor poor service.

wanted to hire and return to this location, had no trailers available, had to pay extra again. this is the second time this location had no equipment.

The people were very helpful and thorough about the rental. Very impressed by the staff and location.

Worst move of my fucking life! I want my money back. I'll be calling and talking to a supervisor. I booked my uhaul well in advance for pick up in Saskatoon, received a pick up location and time with confirmation number. Got an email confirming my uhaul for a different day in meadow lake SK!! Got on the phone and had to make arrangements to pick up in Wynyard sk which they were closed Saturday but the guy was willing to accomodate us, he asked us to call when we were in Foam Lake. My family all got up early 5 am on the road at 530am, called when they got to foam lake and the guy advised us you delivered the uhaul to Canora sk!!!! Why the fuck wouldn't anyone call to let us know this fuck. So they had to go all the way to humbolt sk and wait until 11 with a different size uhaul than originally booked. I had to leave stuff behind and a bunch of my furniture got broke because we had to fucking stiuff the uhaul full. Didnt get to my destination until 8 PM and finished unloading around d11 PM with two small children. I am so beyond mad I cant explain how stressful this was for us. The first time I used uhaul too for an in city move again my order was fucked up even though I had a confirmation number you didnt have my order in your system worse service ever wouldn't recommend you to my worst enemy. I want my money back!!!!! Might even make this public if I dont get my money back .

It wasnt the locations fault for my bad experience... i got to the location and went to pay for the rental to find my bill to be 170$ when I was told it would be 90$ over the phone at the time i booked with uhaul. (29.95 a day for two days plus 30$ to drop off at a different location). It took well over an hour to get it all sorted before the person i called from uhaul honnored the price i was quoted. Apparently there were no notes on file as to the pricing. Aside from that there were some small problems getting the trailer to drop onto my ball where a second person had to be called in to do it. Arriving in saskatoon the person removing my trailer also had to ask for help to get the trailer off my hitch. Super dissappointed my trailer didnt come with a jack! Both hookup and removal problems could of been avoided if a jack could of been used to lift the trailer off my ball! If i would have had any problems with a flat on my truck, or some other emergency i would have not been able to remove that trailer myself! I just found this trailer rental wasted alot of my time at both pick up and drop off. Likely about two hours if you consider the time spent at both locations. (There was no one in line, i never waited to be served). Which to me was unacceptable. When i rent trailers from local people it doesnt take more than 10 minutes for pick up, drop off and paper work. Also both confirmation emails state nothing as to the size of ball or outlet needed for trailer hook up. This needs to be in the confirmation email! I had to purchase this last minute as i didnt have the correct sizes! Honestly this rental was a disaster on the Uhaul end... very discouraging...! Mandy

Drop off went well after here- location was good and staff helpful. UHAUL sucks period though I was suppose to drop off in watrous and went return it there only to find out that they had closed almost a year ago... so i had to drive some where else and then UHAUL just never got back to me on my complaint. Terrible company and terrible customer service. (I just want to clarify that Keyway lanes was good to work with and nothing listed above was their fault)