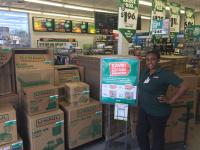 Equipment was terrible. I had a truck in which the headlight was out. I talk to the general manager and he told me it was okay unless you was doing night driving. The truck that was given to me whenever I would break it would make the whole truck shake the steering wheel and all.

Great service. Will be using this location again.

Continue to hire professional people who care about helping others.

The management is excellent! They are attentive and helpful and caring. They take care of you immediately when you walk in the door. I love this uhaul and will use them every time if I have travel needs!

The guy was nice but the equipment had a turn signal and brake out and he said it was our truck even though we used another trailer today and had no issues. And instead of grabbing a different dolly sent us with that.

Mileage on Truck was unreadable, key would not unlock ignition switch without several tries.

The rate I reserved online wasnt what I was given. He said there was a minimum of 50 dollars, when I was quoted 26 dollars online. The truck bed was dirty, but the cab was clean.

Explain the process and progress on using vehicles

I was in and out of there in less than 30 minutes without having reservations. They hooked up and disconnected the trailer without asking for my help. Everyone was great, Thanks.

The cargo van I rented was filthy and caked with mud. The employees were also very rude at pickup. I had a better experience at dropoff.

My truck was having major transmission issues and filthy. After having the truck for 4 hours I received a call from the uhaul coworker that said "I suggest you get this truck back here now because we are reporting it stolen" There was a glitch in uhaul system that showed that truck was not rented but I clearly was given the key and the approval on my phone to get truck. A worker even walked me back to my truck. I did not like being threatened on phone and surely did not like the experience. I have rented from this location many many times with no problems, but this time was a nightmare. For $70.00. That's not how to talk to customers. Also. I really wanted to go unprofessional on the lady that called me but when I got to the location she was just a baby. A very young girl. I explained to her that next time maybe do not threaten the customer on the phone that clearly did NOTHING wrong.

I didn't understand why a relative had to be called. That was a first for me and I am a repeat customer. And I wasn't comfortable with the use of the employees phone to take a picture of my driver's license.

My initial reservation was at a different location. I specifically choose the location based on the available cargo van. The previous renter extended their reservations which affected mine. No other van available. I had to have a van because the particular dump I was going to doesn't allow moving trucks. I wasn't notified prior to going to pick up the rental that my reservations had been changed. The facility tried to give me a 10' truck instead which wouldn't work for what I needed for my situation. The clerk did however get on the phone and find another van somewhat close. By the time this was done, I drive to the new location, wait to be checked in, I'm an hour and a half past my start time. If I had been notified prior by a text or email I could have avoided the time delay and went directly to the new location.

Find staff that are happy when they come to work in the morning.

Difficult transaction. Reserved through 800# initially which went very well although the confirmation did not include the insurance which I selected. Called the local several days before to confirm that the cash deposit of $100 was correct as I was told by the 800# rep who took the reservation and was told yes and there would be no problem with my grandson picking up & renting the vehicle since I reserved it for him but wasnâ€™t going to be physically driving or there to pick up. Morning of pickup the rep (I think her name was Letia but was hard to hear her) told my grandson the deposit would be $175 because other people â€œstoleâ€ from their location and there policy had changed. I asked to speak with her on the phone and she talked over me, was rude and when I tried to discuss this with her she handed back the phone to my grandson indicating she would not talk to me because I attempted to discuss the mistake. I told her I was told by Darius that the $100 was acceptable and that the corporate office had also told me this and she basically said the corporate was in Phoenix and had nothing to do with their location. She ultimately agreed to that but very rudely and offensively said I would be responsible for anything happening. I felt she showed very poor communication skills and service. If the local offices are separate and able to extend own policy then I would have appreciated knowing that in advance. However, I really felt most offended by the mannerisms and method by which the representative â€œhandledâ€ my call that morning.

When I called I asked if the U-Haul could be returned at any location. They said yes. So booked the rental. When I got there I was told I had to return to that exact location. This has happened to me every time I rent a U-Haul.

Give Darrius a raise. He made the experience easy.

Do not make a minimum of 75 miles when renting

checking in they couldnâ€™t find my reservation and I had just been there a week prior scheduling it. The girl on duty was very rude and told me to leave if I didnâ€™t change my attitude. Of course I was worried there wasnâ€™t a truck since I had people showing up to move in a half hour. The guy had to check me in as a walk-in.