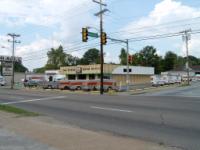 Make sure all the equipment that the customer asks and paid for are in the vehicle. I paid for something that I did not get. Eventually, the company dropped the extra cost.

Contract should've been read out loud won't ever use this location again. Have never had a problem with them just this location

Your trailers are causing damage to low profile vehicles. Must fix this. Hope that Uhaul will repair my vehicle.

Kim was excellent, she was friendly and polite

Employees and customers wear not wearing cloth face masks as required by city. I wore my mask but would have liked others to do the same.

First of all, the truck I reserved from the Old Hickory location was given to someone else. Thankfully the staff at this location was able to locate a truck available at Airways. I lost over 2 hours of time though waiting, and this location was further from my move. Second, the back of the truck was not clean. There was dirt and broken glass we had to clean up. More lost time. Other than that, the truck at least was in good shape and handled well. Third, the mobile return process is terrible. The Uhaul app kept crashing and starting over. The web site kept giving errors when trying to load pictures. It took more than 30 minutes to complete this process and no help was there since the location is closed Tuesdays and Wednesdays. Very frustrating and more lost time. This was by far the worst experience I have had with Uhaul, and we have used their equipment many, many times.

Before arrival I called to ask what trucks were available & was told that there was only a 26â€ truck but online it stated there were more. Book the 20â€ truck online. Upon arrival, the guy was was rude. I rented a $7 dolly online but once got to the store the worker stated there were none which had to pay $10 for a bigger one. Once he brought the truck out, there was a dolly there. I stated â€œOh here's one right hereâ€ he said ok well.., and started rolling the big dolly back inside and I told him to wait because he charge me for the bigger one. First he ignored what I was saying and I had to keep saying wait. He turned around with the appliance dolly came towards me with it. He left it there and walked off and went back in building. I had to load appliance dolly myself. The customer service was awful. & I would like a refund.

A truck that was reserved Was not the here three times! I will never use I haul again

Hire friendly staff. The guys working there have always been assholes. They act like they don't want to be there. Every time I've been there I leave pissed. This was my last time using your place of business at this location.

Dolly I ordered was not in truck when picked up. I was never refunded. Gas reading on app wasn't what was in actual tank.

Truck was very dusty in storage area. They were not open for 2 days during my return so it looked like Inturned in a day late when we actually turned it in a day early.. I received an email saying I am getting a refund but my bank account was charged an additional $73.24 on top of initial hold of 235.54. Was told have to call customer service because they dont know what I am talking about.

TRUCK WAS DIRTY, AIR DID NOT WORK, WOULD NOT START AT TIMES HAD TO WAIT AWHILE THEN TRY AGAIN. ONE TIME COULD NOT TURN THE KEY OFF, KEPT PUTTING IN DRIVE AND THEN PARK AND FINALLY GOT IT TURNED OFF. WILL NOT USE OR RECOMMEND UHAUL EVER AGAIN.

The truck had the check engine light on, and the "change oil now" indicator was on too. There was only one person working on Saturday, and even though we checked in online it still took more than 40 minutes to get assistance and get the truck. Please maintain your trucks and hire extra people to work weekends during moving season.

I emailed as well as called the location asking about if I would be received a deposit back a week ago. I received no response but now I'm receiving emails of a invoice saying I owe more money. The man was very unfriendly and acted as if he didn't want to be there or i was coming to rent his own personal vehicle to move my belongings. I wouldn't recommend this company.

Get a better customer service rep. The guy who worked this day moved so slow and was so rude. The energy was terrible, he didn't let us know what options he had available. He got upset because we didn't have a reservation and tried to give us equipment that wouldn't work with our moving. He was just overall rude. When asked what we were driving, he just pointes at the car. No words, just pointed. He was rude. As long as he's at this location, I'll be going to another.

Only attendant there act like I was disrupting his nap.. Ask him to please discard my paperwork and he said qoute, â€œIt's yours you throw it away.â€

Staff was awesome and very friendly!!