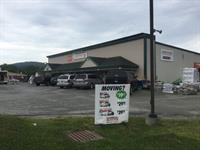 The invoice I was sent the day after my rental has a price listed approximately $10 less than what I was actually charged. That charge is still listed as "pending" when I check my online banking so I don't know if that will change or not, but it's a little confusing.

They told me the tank was full, yet it was below 3/4. When they sent me the bill, they overcharged me for over 200 miles. I tried sorting it out with uhaul but they weren't very helpful. That's what you get for trusting the guy at the hardware store and not verifying mileage. I will be disputing the charge with my bank and will never rent uhaul again.

The place that I was getting the U-haul from the customer service was poor. They didn't know how to do the U-haul paperwork. The manager was on a conference call and when he was done. He never help me or the other customer that was there for a pick up either. The customer had a pick up time for 8 and Mine was for 9. The cashier that were there were rude when I asked her what was going on about someone coming to do it. I told them that I need to get back because I had to buried my boyfriend and move right after the services. I will not recommend anyone to use that U-haul place again. I waa crying when I was waiting because they didn't know how do paperwork and never told me what was happening.

Missing trailer harness, and could not explain my bill to me.

I would appreciate if the manager helping me wore his face mask as the store requires.

The truck I reserved was at the location I selected and ready, however the online process did not work. Thankfully there was someone there who could help. He was knowledgeable and very professional. I've run into problems before with the whole online process before and it needs improvement.

The location i picked from only allowed you to pick up your truck by using the glitchy, customer unfriendly 24/7 app. The truck it assigned me was blocked in. The key was not in the lock box so I had to go into the hardware store it was at to retrieve my key. The guy in the store was more then friendly, but he had no idea about my reservation and couldn't find it in his little app.(Which is all he had to go off of.) Once I got the truck I noticed the gas was only half a tank, and there was no furniture dolly which I had ordered and got charged for. I went back into the store and the clerk simply said that they don't carry them and that he couldn't figure out how to reimburse me, so I should call Uhaul.

it was pretty sticky around the cup holder area, had to wipe it down with some cleaner towels. my issues were with customer service in general, they told me i was confirmed for pickup in burlington but changed it the night before to the jeffersonville location which was 45 minutes away. they also couldn't keep track of my pickup status verbally so i had to download the app last minute to finalize everything. i prefer doing things over the phone but i ended up having to do things through the app in order to make sense of it all, nobody seemed to know what was going on with my order. i've used uhaul a bunch and had no problems, this was just not my favorite experience.

I had no issues with the truck or location. Trying to use the app to get everything is a huge pain in the ass. Fix the app and everything will be great

The trailer that we reserved we were unable to get when we arrived because it was frozen into the ground. Consequently we had to pay more for a larger trailer & the amount we were charged was more than we were quoted. The rental location needs to make sure the vehicle is properly prepared & ready to travel at the scheduled time.

The agent at my pickup location was very accommodating. I was not able to make the pickup by end of day Thur. He hadn't planned to work on Fri but he came in early (630) to ensure I was able to make my move. He was excellent to work with. As I returned the trailer the following morning in DE before work hours I didn't have an interaction with anyone. The turn in website seemed to be easy to navigate. The question about the trailer bring cleaned, I feel needs to be clearer. I only had access to cleaning the inside, which I did. There was no place that I saw ie, car wash to clean the outside. I also hadn't heard of a requirement for running rented equipment through a carwash before it's turned in. The trailer I had was easy to load and unload. I would recommend the service to friends and family in the future.

Made the reservation more then 5 days prior to pick up. when received the confirmation email clicked on number to confirm and it wasn't even that location. Finally got the location and confirmed reservation. When i showed up they did not have the supplies needed to move that were pre- ordered because"this location doesn't carry these items". Isn't that why you pre order the items? they mentioned i could go to a store 30 miles from this location??? the staff was very un knowledgeable when asking about tolls, i wanted to add another driver and information on the insurance that was purchased. He did not walk the truck with me to note any damage. the back of the truck was swept and the cab was very dirty. Drivers side back tire was soft and when asked (cause the truck was empty at the time) the response was it's fine!!! Ended up stopping at another location in New Jersey where they filled the tire with air as it was down almost 20 PSI's. After unloading the truck noticed that the "Attic" had a leak and water had pooled under some of the electronics??

Can't think of anything.

I had no problems everything went great.

Fred from jeffersonville was really nice. What we had a hard time with is not being able to change our drop off location. We thought we made the right decision to bring it back to the same place but then found a uhaul dealer closer to our new house. We tried to change and it was going to cost us 3x what we rented the uhaul for. Why? When moving to a new town/city you dont always know what's around you should be able to make that change.