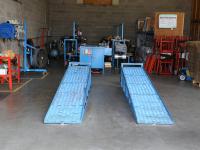 Every thing from pickup to drop off was extremely easy,

Had an issue with the text checkout process. Could never get the pics to load or click anything. Just kept telling me session was expired Have rented from here multiple times and this was the first time this process didn't work for me. Not an issue that would make me not rent again, just a little frustrating since I'm anally retentuve about stuff like this. Had a previous issue with Uhaul about 20 years ago where I got charged for some damage that was already existing. That issue caused me not to rent from you all for almost 20 years. My faith is now restored and will continue renting as needed.

General manager who manages the store is always a pleasure to work with and very accommodating. We have had to rent more U-Hauls recently than we have in a very long time.

Chuck is down right hilarious. His customer service skills are phenomenal.

Made reservation on line a week in advance for pick up at the Tazewell Pike Market, tried to confirm in person and by phone several times with two different people, each time was told system was down and they couldn't confirm. Got e-mail from U-Haul two days before confirming location, (which had been chosen for it's location convenient to my need) and reservation, tried again to call and confirm with no satisfaction. completed on line check in and hoped that would solve it, but when I showed up to pick it up was told system still down, had no way to take payment, and they only had 1 dozen of the three dozen pads I had reserved. Finally called the 800 number and had the reservation transferred to the closest U-Haul center (Rutledge Pike Moving and Storage) where everything was taken care of very efficiently. The Tazwell Pike Market obviously has no idea how to deal with your system and is a blight on U-Haul's reputation, and should be removed from your line-up. The folks at Rutledge Pike, and the lady I spoke to to transfer the reservation were all top notch. I only wish I had been aware of how nearly as close the center was to my needs, and I would have dealt there to begin with.

Store attendant was rude and moved extremely slow through the check in process. There were only 3 customers in the store, including me. I waited in line for 40 minutes before he completed my check in. He kept complaining to everyone about how his coworkers were incompetent and he told me he hated when customers ordered trailers because it was a lot of trouble for him.

Your representative went above and beyond to save me a significant amount of money on my rental.

Just an observation: I went in to pick up my trailer at the scheduled time. There were six people waiting to get their trailers/trucks at the same time. Whomever does the scheduling there definitely missed the mark. There was only one employee working the opening shift on a Saturday. He was doing contracts, hooking up trailers, selling moving equipment, and just trying to stay afloat. While the long wait was not his fault, he kept apologizing to everyone for their wait. He maintained his composure and was moving the line as best he could. He should be commended, and the franchisee and/or manager should work on their scheduling skills after apologizing to him for setting him up for failure.

Chuck does a great job. Strictly business. Works hard and efficiently. He could use some help during peak rental times. Or just give him a raise. Hobs

Returned car hauler on Saturday. There were 8 people ahead of me and only one employee. This location should have more employees. Did not get name of employee but he was very helpful, friendly and efficient. The trailer did the job but the brakes were very rough which made it jerk when stopping and starting. Felt like I was being rear-ended every time I stopped.

Again, the staff were so helpful and friendly. The manager was great. From start to finish the experience was amazing.

Your manager, Chuck Nelson, was not friendly and in fact a little rude. He's not smiling and don't interact well with customers. On the other hand, the other manager, the tall.guy was very nice and friendly.

Jason, the manager, was TOP NOTCH! Very helpful, Whatever you are paying him is not enough.

The customer service through call center was very great! She is awesome. The one at the site didn't really care at all. It's like he's so annoyed. The truck was great except for the driver/passenger area where it smells really bad. Good thing we only have to move some furniture and didn't use the truck for days. Besides that. All is good.

The attendants at this location couldn't be less friendly. When going in to pick up my keys, it seemed I was putting them out and there was nobody else there. I then asked for assistance with straps and he pointed me to a wall and offered no help. The truck itself seemed clean when I picked up and then I realized after driving the cup holders were filthy and one was filled with dog hair and there were napkins from a fast food restaurant on the dashboard. Very disappointing. I tried to explain this in the return form online, however Uhaul wanted to charge me the $25 cleaning fee.