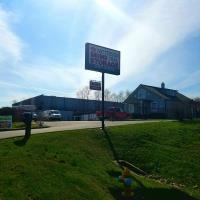 Everything went really well. Picked up the truck on a Sunday and when I got there, there was a note on the door saying to call this number. I called and the guy was there within like 3 minutes. Very friendly, easy and smooth.

When I first went into this u haul rental office the owner asked if I had reservation I explained to him that I did not that my truck had broken down and I was pulling a u haul and needed a moving van he told me he couldn't not rent me a truck on his lot because he needed them for the next day so I left and called the UHaul number and was able to reserve the UHaul at the same place when I went back to it to pick up the rental the gentleman was very rude!!!

Staff was very quick and had us out the door in a short time, Great!

They overcharged and did not have equipment in van that I ordered online.

The lady there is very hateful, she also checked the box that the van i was getting was full, it was not, it was below the full line. But i filled it up and they still charged me $4.88 for fuel sales, another charge that i was not told about was enviromental fee of $100. They owe me $5.88 and will refund it to me or I will go to someone that can help me get it back. Stay away from this place. Thanks, Debra

The front desk people were very rude and short. This is my first time renting a Uhaul so I obviously don't know everything about it. Right when I walked in and said I had a reservation the older man at the desk asked me for my name, I gave him my first name. He then said someone else had rented the uhaul, it was under a different name. I said well I did online... Could it be under my last name? Gave him my last name. Seemed like he didn't wanna do his job. Didn't give me a total or really explain everything I needed to do. I realized on the way back he had given me the wrong receipt of someone else with their personal information on it. When I dropped it off, there was a lady at the desk this time. I said I was here to drop off a truck & she very rudely said â€œHold on a minuteâ€. Explained to her the man this morning gave me the wrong receipt. She didn't really care or try to make another one. I work in customer service so I was very disappointed to be treated like nothing I said was important or acknowledged.

Ralph was very nice and professional. I have only good things to say about this location and him. Fast check out and check in and the truck was well maintained and clean.

My go to uhaul dealer. Always nice and helpful.

The location was not aware of the reservation. Equipment was difficult to drive as a result of poor maintenance. The location smelled of urine.

Need to mark the key pickup box a little better. It was hard to find

Such nice people, thanks.

The office smelled like cat urine and U-Haul needs to understand most people only have one phone number now. One more thing I did not receive the email about the rental until after I had rented it.

The man at the pick up location was not friendly. He made several unnecessary, rude comments.

The guy was rude I got to the place it was closed, I called the number on the sign. I told the guy I had a reservation at 3, I got there at 2, he said well it's not three yet. So I said okay I was told to be out here before 3, he then tells me it's going be a 15 min wait until he gets there. At 2:15 I calls him again I asked him do he think he'll be here by 2:30, he said he should be there in 5 more minutes. He then comes and he's rude he did not speak and he made me feel like I was wrong for being there early, awkward silence in the room, he didn't explain any fees or cost. I asked him the cost and he told me that there would be a hold on my card. Then he told me the amount of$94 and some change. Handed me the keys and that was it. I left the building and he comes out a few seconds later and tells me to examine the truck. The whole experience was weird. Bad customer service and poor communication skills I would never go back to this location nor refer anyone I know. There was no Dolley on the truck as well I got all the way home and found that out. I am female and I was expecting better expectations with this company knowing that this is a business no equipment was available for my use of expenses. I feel like my experience was treated very rudely and unprofessional.

The woman at the front desk was extremely rude and she seemed to have racially profiled my wife and I for where we were moving too. She did not think we had the money and overalled judged us based on our appearance. She referred my wife and i as. â€œYou peopleâ€ stared â€œyou People never have the never money on timeâ€

Ordered a 10' truck, you asked if I could substitute a 15' at same cost. I needed to verify clearance of a 1 lane bridge and was concerned with height of 15' truck. I was told it required 10' clearance, when in fact it required 11'. My bridge was 10'9" clearance, which resulted in an alternate path to/from my destination 3 times. Other than that, I was pleased with my rental.

The staff was very unfriendly and rude. When we arrived for our reservation the older woman and man never greeted us and spoke to us very condescending, as if there was no way we made a reservation and were in the wrong place. Also for no reason, the woman was glaring at my father who was standing off to the side while she was filing my paperwork. After I got the keys, I asked if I could leave my car there because I would be returning the truck in a couple hours and the woman acted like it was a big problem but then said it was okay. I don't know if they were racist or just don't see many 22 year old women renting trucks but for whatever reason they had a problem with us being there. Will not return to this location!

Was charged for 3 gallons of fuel when I returned it at the amount stated on my invoice... made a point to fill it right down the street as well.

truck was there an ready to go, people were nice friendly ' and a very good truck for our needs, thanks to all for being there for us, in time of need!

The whole MINIMUM 50 miles of gas hidden fee bullshit was pretty annoying, it's like a hidden fee. This has nothing to do with the individual Uhaul place, they were lovely, but as a whole, this should be included in the price, not as a surprise as you swipe your card.

I was given a truck on empty it was reading 49 miles to E. I put 25 dollars in there and was still charged an extra 23.08. For what reason I don't know.

The person was 20 mins late getting to work so we had to sit there twirling our thumbs. The poorest customer service I have ever gotten for a U-Haul

Nothing comes to mind