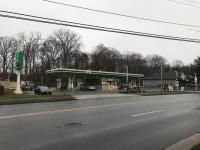 I had to wait for a very long time to get checked in. It took too much time. I would not have made it to Philadelphia in time to pack and travel to get my keys before the manager left for the day; therefore I had to make an extra trip from Baltimore to Philadelphia to make sure that I get the keys. I had already did early check in via internet, but I was still asked for two other people phone numbers. It was a gas station. When I first came in an older man came in from the back to ask me could he help me. It was already another guy working behind the window who could help me. He is the guy who took so long and that asked me for all those phone numbers.

I arrived at this location to drop off the trailer went inside to speak to the manager and I asked where he wanted me to place it, I then asked if I needed to sign anything he said no just drop it and leave. He didn't even ask for my name. About 30 minutes later I didn't feel comfortable so I called customer service and told them I dropped it off just to have some sort of record. She called the drop off location and he still did not check the trailer in a received so she made him. I am extremely mad at uhaul.

Super helpful and nice owner! I needed somewhere to park the truck overnight to not get a ticket or towed. He let me keep it on his property. Plus he removed the tow unit and untied my car. The extra help from the U-Haul family goes a long way with the already low price from moving yourself.

great everything perfect just send more trucks in this location

Representative charged me for something I did not do! He was not willing to listen, and the language barrier made it difficult for us to understand one another.

This was the WORST experience I have ever had using UHAUL! The 'quick' online check-in failed terribly!

Location doesn't have reception for Verizon wireless which made it very difficult to complete the check-out.

Customer service needs to improve. We rented a appliance dolly however one was not at location where I got the truck. I was told to travel up the road to get it. No where on my rental agreement did it say this. So needless to say, I was not happy.

It was the worst experience I have ever had with u haul. Will never go back to that location again

It took me two hours to pick up my vehicle I'll supposed to pick it up at seven I wasn't able to leave until after 830. It was asking for verification I put my dadâ€˜s name in who is a senior and I am a junior and it wouldn't let me except it because it was the same name... and then the location services asked me to find my location but it would not submit so it refused to let me proceed. Do you whole office was supposed to be open at eight, 9 o'clock they were still closed. I was two hours behind on my moving.

Loved the drop off and pickup through the mobile app

Unfortunately the UHaul representative was not present and the "quick stop" station operator tried extremely hard to assist in completing the rental process. He made several online attempts as well as phone calls all of which a last ditch effort an hour and half later to a district manager who was able to successfully guide him to complete the contract. He then willingly left his store to assist me in hooking the trailer to my truck. He was very pleasant.

I would like to see a quicker exit strategy implemented in the future.

Not let them rent uhaul trucks it was a joke

This particular location issued inappropriate charges to my Uhaul account. I was charged for refueling of the truck when the truck was returned with the correct amount of fuel. I was also charged a cleaning fee. The truck was returned in the condition to which it was received. The personnel notated on my account that the exterior of the truck was dirty and I was being charged accordingly. A customer should never be charged for the exterior condition of a truck unless it is accident/damage related. I contacted the customer service department of Uhaul and they contacted personnel at the return location immediately. The situation had to be escalated because there was a â€œlanguage barrierâ€ with the personnel on duty at the time. If I ever rent another Uhaul, I will certainly not be renting or returning the equipment to this location.

It's a gas station and the clerks do not know how the process works. The guy that checks in the trucks and equipment did not have set hours so we had to drop our equipment off in a parking lot at a gas station. This location is not great if you have a trailer attached to the truck, there is not a lot of room to maneuver.

I was guoted.99 a mile. Charged$1.29 They have yet to change it. They play language barrier.

The rental office is across a dirt junkyard and the office looks like bodies may be hiding under the trailer. However, Cheema has the best customer service and made this all worth it.

This is the second time this has happened to me using UHaul. When trying to pick up my reservation at 17 carroll island the clerk didnt have a reservation for me. The cargo van I wanted to use was already booked. After calling Uhaul i was told my reservation was moved to another UHaul location. Apparently I didnt notice the email stating it (which was my fault) but if I recieved a phone call and a voice mail instead of just an email this would all of been easily rectified. Since I was dropped off at 17 carroll island I couldnt leave so my reservation was changed back to 17 carroll island All in all it took 1 hour of waiting for everything to be changed. I had to take a larger vehicle which I didnt need or want and I was late for my appointment. I would like to point out a few other things. the gentleman clerk at 17 carroll island was very nice and helpful even though I was not very pleasant. The cargo van that I originally wanted to reserve was never taken. I know this because in my travels I had to drive past the 17 carroll island location multiple times through out the 2 days, it never moved an inch. Lastly, when I returned the truck of7 the clerk (a different person) un-courteously made me go back out and record the mileage for him after I dropped off the key. If I'm the customer, why am I doing work? Is this UHauls policy? Using Ryder all I have to do is park it and get out.

Truck size that was needed was not readily available, nor was one available in a 20 mile radius. Closest truck that was needed was 75 miles away. Had to settle for a smaller truck, which reseulted in 2 trips. Had to pay for extra mileage put on the truck due to 2 trips. Other than that location and rep were good.

I just got Ripped off by U-haul and BP at the Carroll Island Rd Middle River. I even took the picture of the odometer before leaving showing the clerk at BP that the mileage was 29092 and I return the truck with 29139 miles. The difference is 47 miles. I never had a bad experience like this one.