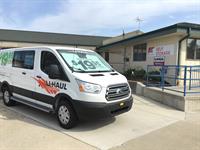 We did online pickup and had issues from the start. The online chat is a JOKE. NOBODY RESPONDED!!! We had to call U-haul and wait for 10 minutes before talking to anyone, then got cut off. Had to call back and wait another 15 minutes before talking to someone and then it was resolved. our truck was scheduled for pick up and we were doing the online registry at that time, but weren't actually able to leave with the truck until 10:30 because of all the issues!! Seriously the worst experience. Will NEVER do online pickup again from Uhaul.

Despite reserving a U Haul for pickup through the front desk of the business, when my wife and I arrived at the office, it was closed due to the one employee there being away. We called a number listed on the door and were told by this employee that we had to change our reservation to an online one through the app in order to get the key from inside the vehicle. We began doing so and were told to provide another "secondary contact" despite already doing so in our initial reservation. We added the number of my dad helping us move without knowledge that he would then be called to confirm this. He wasn't with us and missed the call and despite calling back right away, was told there would be a 20 minute wait time. We then had to come up with our quaternary(?) contact who answered and nearly 40 minutes after our initial reservation, we were told to return to the office (which was locked) to get the code to unlock the box with the key in it. Thankfully, the single employee had returned by this point but it ultimately made the switching to an online reservation as we were told, pointless, as we were forced to go inside to gain access to the van anyways. This is our second experience with U Haul going poorly in a manner such as this at just as many locations and may likely be the last time we ever use one.

Even the woman inside was very polite and helpful! We did this process through the mobile app.

Make sure codes are sent out for uhaul pick-up. My code wouldn't send and I had to go inside to get help, but when I did the help was excellent.

Not this location because of the attendant specifically. Perhaps it was just not her day that day, but she was not very kind or helpful. Not expecting her to be chipper or anything like that but she was cold and would not move an inch to help customers.

The attendant was rude and yelled at us because we were being loud and she wasn't able to take her test for a class she was taking for school and she would not open the gate for us.

The customer associate was barely polite. The truck was parked where we had to back it out between a van and another car for a long distance next to a building. Felt like we could have scraped up this brand new vehicles mirrors, just pulling out of there! Then had to drive all around the place to go out. There was a gate right by where it was parked, that a guy opened up immediately as we got back to our vehicle we came in. It was like the associate was too lazy to open that gate.

Charged for a service when specifically opt out! When I returned the equipment, In the afternoon during normal working hours, nobody was there. Then I get a call 2 hours later with a late return issue! Poor Uhaul representation again.

The csr seemed very preoccupied with something other than us. We were the only customers in the area, and the business seemed slow.

Wasn't In the office when the hours Posted Showing they were open.

I was supposed to get 2 bundles of moving blankets ( did not have).. There was a lock on the back of the truck.. person behind desk did not have combination.. had to wait for her to get it 15min. I asked how to get the truck back in as it was fenced in. She said download the uhaul app but did not know how to use it.. How pathetic.. luckly a guy came right when I was trying to get in after the place had closed.. he had a key to use on the key pad to get in. Also 1 week earlier I had rented the same size truck from a different location.. the cost was half .. WHAT GIVES WITH THAT.. REALLY DISAPPOINTED WITH THIS TRANSACTION WITH YOU UHAUL THIS TIME TIME!!!!!!!

The mobile check in process is very confusing. There are some pre steps to do before checking out the equipment but what those steps are is not told to customer prior. If somebody is going to read this, please make sure that customer is informed at least 24 hrs so they can do the steps and not wait outside the facility waiting for it to open even though they had reservation for ealrier time.

They're closed on Sunday's. You would need to have the U-haul app if you're return after business hours or Sunday to complete the return process. The location didn't have spare keys for vehicle, when I was returning it, I locked vehicle from inside instinctively before exiting and they said I'd probably need to spend $150 for damage charges to get vehicle unlocked because they don't have spare, they were even ready to charge me for 2 additional days before they finally had someone unlock it. I had to deal with U-haul area manager directly, make him several phone calls and emails requesting not to charge me and explaining the situation. In the end, I was only charged for what I should pay for rental period. But, the whole experience was bitter and I would never go back to this location to rent.

I got switched to this location because the truck I wanted became unavailable at the original location. The woman from this location called me repeatedly asking me when I was coming, even though I had told her I was on my way.

Everything says that this location was open until 6pm dropped off my rental at 445 and it was locked up tighter than Fort Knox. Hopefully this was just a 1 time occurrence or maybe this location needs to update their hours in uhaul.com and the various other outlets