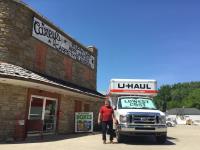 There was no one at the location when I arrived. I was suppose to pick up the truck at 730 am. The app told me I had to wait until 10 am when the location opened. No one there. I had to wait 20 minutes past the time that it was suppose to be opened. Problem with my account. Fix that went back into pay and get the truck, he was gone again. Another 20 minutes or so. So a truck that was suppose to be picked up at 730 am was not leaving the location until 12pm!!!! Messed up my whole move. I lost half of my help. I am 66 yrs young but I still can't handle that kind of move. We are still not done, because I had to have the truck back.... I have had good service at other locations, this one never again!

The equipment was cleaned by previous driver. The place is nasty an stinks super bad, The guy dint know what he was doing an was very slow.

Improve your wait/hold times when calling your 1-800-go-u-haul, I wanted to call to ask a few questions and change something but every time I called I waited on hold for at least 45 minutes. Only one time did I actually get through to someone, the other times I had to give up and hang up and just figure it out myself because I didn't have time to wait on hold that long. Ridiculous!! All other service was excellent other than that, very frustrating.

Carey always sets me up, and I'm thankful for his good help always. Great!

Carey helped me unfasten my car from a tow dolly which I never did before. Good guy and would HIGHLY recommend doing business with him anytime. Great experience!

I arrived 15 minutes early (1:45 pm) to pick up the UHaul I had reserved online. The doors to the store were locked and no one was present, even though the website and signs on the door indicated the store should have been open when I arrived. When no one showed up after a period of time, I tried calling the store's contact number, as listed on the UHaul site. The call went to voicemail. A man drove up to the store and said he was an employee of Mr. Carey's. I explained my situation and he said he would try to find him. The employee returned saying he had found Mr. Carey and was told to tell me Mr. Carey said he didn't know when he would arrive at the store to deal with my reservation. I then called UHaul and spoke with several people. The first lady tried to be helpful and provided a certificate to use on my rental, but she wasn't able to contact Mr. Carey so she transferred me to the Fargo office saying they could help secure another truck, possibly at another location. The person there was quite rude. She said no trucks were available anywhere in Minnesota or North Dakota and she couldn't help me. She then had me contact the area rep. He was out of the area and only had the same cell number for Mr. Carey, which also went to voicemail when he tried to contact him. (Now we are going on an hour late to pick up the truck and I am on a time-crunch.) Mr. Carey finally showed up after approx 1-1/2 hours after my scheduled pickup time. He was VERY rude and basically dismissed my situation, saying he has other projects he is working on, has no other employees, is very busy, etc., etc., and goes on to tell me "That's just life, sometimes." Of course, his nonchalance angered me even more. We proceeded into the store (horrible conditions) and he ... very slowly ... starts his process. I told him I had entered everything online, but he said he needed to re-enter everything ... and, again ... very slowly. He even had to call UHaul to help him out, even though he said he's rented UHauls for many years. I also gave him the certificate information, which was supposed to be applied to THIS rental. After 2+ hours of dealing with his lateness and ineptness, I FINALLY was able to leave with the truck. I thought (silly me) that the coupon would be applied and I would not be charged the full amount for this rental. I even received an email from UHaul with the charges asking if I agreed withem. I replied I did not and provided my explanation. Even with all of this, I still see my credit card has been charged the full amount. A little more than frustrated with this whole transaction, to say the least. ... and it all seemed so simple at the start ... enter everything online, quick in and out for pickup, and you're good to go. I truly believed that would be the case. Again, silly me.

Kind of a sleezy place and person to rent from. Very slow even though I had already done everything including pay online,

Carey always does a great job getting me set up. Thank you!

Cary did a great job, very personable, helpful, and friendly, thanks.

Renting a U-Haul is a terrific benefit to have available in our community.

The trailer tires were not made for highway traveling. The trailer swayed constantly.

We arrived at 10 am and waited a few minutes for someone to show up to rent the truck. They had no idea we were there to rent a truck. I would think in this day and age of electronic notifications the site would know when people were renting and what they were renting. When we came back to return the truck, not a sole was in the store. We hunted around for 10 minutes only to discover no one could return the truck. So I took numerous pictures of the truck to insure we didn't get charged for damage we didn't cause etc. and put the keys in a box. Didn't realize we could have done this via our phone, but quite frankly I'm tired of putting so much personal information into everyone's site. And don't tell me yours is secure - the IRS, US Bank, Target and numerous others have said the same thing and our identity was stolen from these sites, so don't get me started. And by the way EXPRESS check in was NOT express. The guy had to enter almost all our personal information again so I'm not exactly sure why I entered it once and then he entered it again. Made absolutely no sense to me. I figured EXPRESS meant I would show a drivers license and pick up the keys and we would be gone - not even close. BUT the truck was available, it ran, was clean and we were able to move our son so that's what counts.

I don't think you could improve on it.

The truck was clean and ready to go. It does, however, need new wiper blades.

Please explain the drop-off rates... We were told we could drop off for the price paid the original location and ended up paying a ton more when I dropped off a new location

Location is a cold, old run down building - not well kept up - person we dealt with was not personal or friendly, had to hook up trailer myself. Would not recommend this location.

The trailer was in great shape and the service through Carey was excellent!!!

Promised 80 miles included in the rental, upon getting the receipt noticed they only gave us 71 miles

Pick up location was an old dusty run down store in which I didn't want to touch anything due to fear of needing a tetanus shot. A cleaner, more presentable store would be nice.