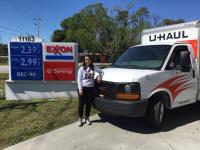 The dropoff was at a Mexican grocery/takeout place. It might have been a super easy dropoff except that the two women spoken very little English and had pronounced accents. We eventually figured out where they wanted us to park, and that they really did want us just to bring the key inside and drive away. I've since gotten the final receipt and everything worked out fine.

I booked online weeks in advance and ordered a furniture and appliance dolly, neither of which were available when I went to pick up the truck. Additionally, the truck was picked up at a gas station where the computer system was down and the truck wasn't full on gas. This was just a pick up point with zero help coming from staff, so I'm just lucky that everything was in working order.

Terrible location should lose their status as dealer. Poor customer service. Cashier didnt know how to use uhaul check out, couldnt print agreement. Threatened to call cops when corporate on the phone had to do trailer checkout. Terrible place.

I filled up with gas before dropping off the truck and was still charged for fuel...

After going directly to three (3) of Uhaul's neighborhood dealers, I finally found the trailer I needed at the originating Tiamiami location. Upon arrival, it was immediately apparent that no one at the location spoke English. There were 3 clerks working and not 1 spoke English. Through a frustrating communication attempt, the store clerk began repeatedly saying "reservation". With no internet access except my phone, I went back to my vehicle, and over the next 30 minutes did the best I could in registering and checking online on the UHaul site.

I made a complaint because no one (The 2 locations) told me about the FEE they charge when you drop the truck in a different location and the worst part is that I asked them by phone 2 times the day that I got the truck and couple hours before returning the truck and both locations are just like 8 or 12 miles away they are close same city. I got a huge bill of $291 and I called as soon as I received the bill and they opened a case today the claim number is 2359478. Another thing that happened is that when I returned the truck the guy just told me give me the keys and I sent you an email with the receipt, so he did not check the truck with me to see if the truck was good, or clean or the miles and he sent me an email the day after at morning. I rented more than 3 times with you and this time was really bad.

The agent gave me a hard time when picking up trailer. I had an online reservation and she would not accept it. I want to say that it seemed as if she didn't know how to process the order and gave me a bunch of excuses. This was the second location I tried as I went to a previous location where the associate honestly told me that only the manager knew the process. He at least didn't waist my time like the other associate I dealt with this morning. I definitely think they need more training as this will cause a decline in business. I was late to where I had to go due to all the run arounds I was given and would think twice before renting.

there should be some kind of sign at the entrance of the store stating that you have to go to the UHaul website to reserve the truck as the staff inside the gas station is not involved at all. luckily I speak Spanish so I was able to communicate with them but they did not know English so it could pose an issue for a future customer that does not know it has be done online only for that specific location.

The location is not listed as Marathon but a very small Exon gas station. I was expecting a larger facility can easily miss it without a GPS system especially if you are not familiar with the area

There was a cockroach in the cab of the van. Alive. Also, the one and only employee who handled rentals was gone when I came to return the van and I waited more than 30 minutes for another employee to show up and teach herself to check the vehicle in. I doubt I was charged correctly as I never did get a receipt.

The people barely spoke English. The truck had a tire issue.

They went above and beyond helping us to resolve an issue.

Complete a holes they tried to scam me with fees acted like they could not speak much English. Never ever gave me a final bill ....told me to take it up with uhaul Worst experience ever renting a truck

Computer system was down. Waited more than one hour for it to reboot. After they got me checked in nobody walked through with me to check the truck. The windshield wiper handle was completely broken off. They had no other trucks available so we had to take that one. It rained for over 2 hours and we had to pull over because wipers not working. When we tried to return the truck later that day there was no one available, they said they were closed. I told the man the person earlier had told me they would be open until 8pm, he responded: that guy (who actually helped us with the truck in the morning) does not work here, he was only repairing the air conditioner (????). This guy was very standoffish and of very little help, actually rude and short with me. He spoke some words in another language I believe it was arab, he probably disrespected me but I don't speak arab. We left the truck on the lot, called U-HAUL and the agent made some notes regarding the system being down and why we were instructed to come back the next day to do the return. My husband came back the next morning to do the return. Again, the system was down and he had to wait a while. PLEASE, this location makes U-HAUL look REALLY bad, find another store with efficient employees who actually care. I will never return to this location, nor I recommend it to anyone. I like to request U-Haul a $50.00 credit because the rental was not available when it should have and we wasted more than 4 hours checking in and out, and waiting for the rain to stop because a broken windshield wiper piece. Please contact me at 720-296-2096 my name is Iris Kurtz and my husband is Lesser Gonzalez.

Staff is rude and slow service!!!

Definitely have the same girl help them. Wow!

Horrible experience. Clerk spoke only Spanish and didn't know how to use the check-in system. Indicated we could leave the truck, but then proceeded to charge us for another 5 days. Working on getting that credited back. Don't bother with this location. Very unprofessional. And we also speak Spanish.

Nobody knew had to use the uhaul system

Gave me the hardest time for payment. I was told by U-Haul directly I can pay cash.. come to find out I couldn't. I had to purchase a prepaid card which did not work... long story.. but U-Haul is horrible. 2nd horrible experience!! Never again!!!!

Everything!!! Did not speak English. Could not hook up trailer. Totally unsatisfactory. We will NEVER rent from UHAUL again. UHAUL clearly has NO quality control of their agents or this location would not be allowed as an agent.

It took us a long time to pick up since they took other people in line first at their grocery store. We reserved pads and paid for them, were assured they were inside and got to our moving location and pads were not there! We tried to get the pads refunded and they said they would get in touch with us via email but have not heard from them. Worst UHaul experience ever...and we had used UHaul quite often. We are debating on whether to even use UHaul on our move with a 26' truck later this month.

They were just slow

The question should be 'What was your on line experience'. Our on line experience was highly unsatisfactory. Uhaul practices active deception in allowing the user to think he is booking one location and then sending an email indicating that the truck is at another location. This happened twice. The clerk at the second location emphatically told us that we NEVER had a reservation at her location on Tamiami when, in fact, we did. The location we were assigned more than doubled our mileage charge. We were told that registering on line would save us time when picking up the truck. Virtually none of the information was available to the store manager at the Exxon (not Marathon) station we went to. Check in was laborious and took more than 30 minutes including re-entering the information that had been provided on line. The scandal, though, is the way that Uhaul does not ask the customer if it is ok to switch the customer to a location that is farther away. It is likely the least customer friendly software with which I have used. I can be counted on to actively dissuade any potential user from renting from Uhaul