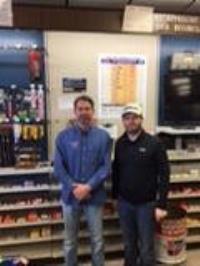 Try to get rid of the 4 inches of snow next time.

Friendly service. Backed in and getting my contract and Jacob was already outside to check me in. Great location in Pampa

Truck was in good shape but could have been cleaned a little bit.

Very easy process. Picking up the trailer was a smooth transaction. Helped me hook it up and made sure everything was road safe. Would definitely rent again.

Very nice gentlemen helped at completion of job. Thanks!

I requested an appliance dolly but they did not have one, so probably just need to maintain more moving supplies in stock. Otherwise extremely pleased!

Make sure the equipment is clean. There was over a gallon of dirt in the trailer. When I called Carquest on Monday they said they would submit a credit. I checked my CC statement and nothing has been applied. Assuming it will take a couple days.

I was very impressed with the people at this location They were very friendly and really worked to make sure I got what I needed. I have been around uhaul before the 9nly thing I would say is to make the computer system more user friendly for customers and the distributors. Thank you for the service.

The whole app thing was a horrible experience! It's a piss poor way to do business. Corporateâ€˜s just went in a bigger profit so they cut out the personal touch. Having to do your job for you I should get paid for using that app. Customer service was a joke I was on hold for 26 minutes! It's not about giving people jobs anymore it's about lining millionaires pockets I would rather do business with an individual then an app!

You get a 100 ?? from me! The back end of the trailer leaked in the rain and ruined a few things. Nothing expensive but I forgot to share it when I dropped it off. It was a terrible inconvenience but ya'll more than compensated me for it (Without even knowing about it). with your generous understanding and adjustments in my favor. By extending my time on a daily need basis for nearly a week.. If we all keep forgetting to mention it you can't repair it. You guys are the kindest most understanding people during a hard time with this Coronavirus. I got stuck in between locations. You actually became my support system. The drop off and pick up people were just as kind and generous. At least at all my locations. Bless your business and team! Thank you!

The truck assigned for a 600 mile trip was not the type of truck needed for a 600 mile trip. Although it did make the trip, the power steering at idle speeds did not work properly, there was a horrendous air leak around the door seal and the door rattled for all 600 miles. The trailer door was very difficult to open and the latch was hard to move.

Your internet check into my phone was horrible. I spent an hour calling y'all back and forth several times in order to get the key code to unlock the key. area.

Made sure everything was right. Hooked it all up and made sure. Great job!

Stop the franchise of Abby's U-Haul in Pampa. If it were not for Car Quest bailing Abby's butt out of a jam, I was TOLD my trailer would be at Abbys U-Haul. I arrived and the #$%^&* didnt have a trailer. I contacted U-Haul and was unaware at that time my contract had been changed to recieve my trailer from Car Quest at another street address. I was not given my $50.00 offer as U-Haul says they will do if my reservations obligation was not met. IT was not met at the time I made the reservations. I was delayed by the additional time I took to contact U=Haul representative and then to drive to the new destination to pick up a trailer. I was not given an open trailer as I requested but a 4'x 8' box trailer. This resulted in my having to make 2 trips to my destination of Amarillo, Tx. which resulted in an additional fuel charge I was not counting on. If I was afforded an open top trailer, I would have been able to place all my items in it instead of the limited space I was given in the box trailer. I was not offered any reimbursement for this inconvenience as it also resulted in my having to consume 4 hours of daylight on the 2 trips instead of making one and getting the job done in one trip. I was late in returning the trailer due to the time needed to make the second trip. I was given the excuse that when I arrived at Abby's U-Haul (who says they open at 8am) it was 915 am and there was NOONE there. Your Representative advised me he contacted the operator who stated that he was there and that "he must have went to the wrong office". There was NOONE at any building at the time I was there. There was NO open trailer in the parking lot for me as my reservations said would be. I was not offered any compensation from U-Haul or reimbursement of the $50.00 vow you advertise to give if your "reservations are not met" I was not afforded an open top trailer, instead I was told my reservations was not made for a BOX type trailer which caused an additional expense for fuel for another trip ( 140 miles) from Pampa, Tx. to Amarillo, Tx and not offered any reimbursement for the fuel or for the additional time to make a second trip which caused my return time to be delayed. If U-Haul says they will "guarantee your reservations or you will be paid $50.00 for your trouble" Then By freakin Gosh, stand behind what you say.

All the employees were super friendly and very knowledgeable. I would highly recommend this location.

The dolly we asked was not present, and still the company is trying to charge us.

One suggestion would be to try to have more trucks available, and also check with the agents who rent out trucks too to make sure a truck isn't double booked. There was such a mix up with over booking that I didn't receive the truck I originally booked, and I had to settle for a smaller truck. Other than that Carquest in Pampa, Texas customer's service was amazing!