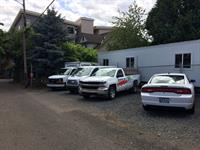 Service was quick, efficient. Would use them again in a heartbeat. Truck was first rate.

The owners were very nice and accommodating.

I went to the gas station and filled up to 1/4 of a tank. Employee said it did not meet where it needed to be and was charged a $30 full up fee, and $14 for gas.. I do not feel that was correct. I will not come back here. Thank you.

Awful. I had a reservation confirmed for the location on 1130 NE Holladay St in Portland for 10am, the reservation was for a van for 5 hours. I waited 40 minutes, no one ever showed up at Union Market and Deli, the UHaul dealer. I could see the van parked nearby, but no one ever opened the deli. At 10:40 and with zero other information, I received a text with directions to a different location, the dealer on 4058 N Mississippi Ave Portland. I had a move to make, so I rushed there to pick up the van. Upon arrival, the dealer pulled up my information on the screen. By this time I have lost an hour I should have spent moving. She hands me the key to the van and tells me I have to return it by 2:30 at the latest. A QUARTER OF A TANK OF GAS IN THE VAN. I had to rush to move at least a few large items in the van to the new apartment, return the van and move everything else using my car. AND, I WAS CHARGED FOR GAS. Seriously people, you're UHaul not a mom and pop shop, you're not cheap, to say this sucks is an understatement. One of the worst experiences ever. Zero stars if I could.

The location was terribly hard to find, resulting in a late pickup. The check-in instructions were unclear, which also delayed pickup, resulting in us not getting all of our stuff moved in the time we rented for. It was a horrible experience.

Everything was Awesome! They really made our move ALOT easier by making the Uhaul experience a Very smooth process. THANK YOU!

The person that was working at Clarence Walker for Flowers was very nice. I can't complain about her effort of good service. The overall experience was one of the most frustrating I've had in a long time though. First, I didn't reserve our van with this location. I reserved it somewhere else, I signed up for scan-and-go pick up and I confirmed the pick up the night before using the U-Haul app â€“ which I was told I had to download in order to do scan-and-go pick up. However, the next day on the way to pick up our van I logged in to the app to go over the scan-and-go procedure and it listed an address I had never seen before. I called the number for the location and the peson said they didn't actually have vehicle pick up but that was a frequent mistake. I then checked the website and it listed my original location. So I arrived at the location and they said they didn't know anything about me. I showed them the confirmation for the pick-up on the U-Haul website and they said it didn't matter because all of their vehicles were spoken for. After some confusing and frustrating phone calls they told me that my van was in fact at the location the app was listing. I told them the peson there said they didn't even have vehicles and they said that's my pick up location and they couldn't do anything else for me. So I called the person *again* and this time she said, "Oh, we actually do have your van." I never found out why she told me they didn't have vehicles the first time. I asked the people at the location I was at how they could just not have my van at the agreed upon location and they said this is what U-Haul does. They double-book and then move people to other locations as necessary. You would think they would at least contact me and let me know they were doing this instead of letting me show up and have no idea what's going on along with the check-out staff who also have no ideas what's going on. Thank god I padded my schedule with an extra 90 minutes. So, now 30 minutes later than expected, we drove to a new location for which I did not agree on and for which the website still said was not the pick up location. Once there, I was told my contract no longer allowed scan-and-go pick up so I had to go inside to check out. I was also told there would now be additional fees. So on top of the surprise re-location, the final bill was $76 more than I was quoted on the website (some were additional fees and some were hidden fees) but that's just something I've come to expect from U-Haul so at least I was ready for that. I've always considered U-Haul to be the de facto choice for moving vehicles but I'm definitely going to be looking into alternatives now. This was atrocious and it ruined the first half of my day.

The location was great, but the UHAUL mobile part of the experience was HORRIBLE. The extra phone call (that could have been done ahead of time) and other hurdles that took a long time at that specifically (and predictably) stressful moment when your customer least wants to deal with it...right before you set out in the rented vehicle... Also, the checkboxes on the mobile page did not work! So the person at the location ended up having to check me out anyway, and I had to waste a lot of time for nothing and pay extra because the web page didn't work. So in summary, great marks for the location, very poor marks for the UHAUL mobile process.

Tough to back truck out of alley Alley blocked going forward

check in was balky it took too long

Pick up location was very unique. I'm glad I checked it out beforehand. Linda, the store rep was very helpful and engaging.

I don't understand how I was charged almost 150 bucks for having a vehicle for three days.

the woman working there was cranky! she seemed annoyed that it took me a few minutes to figure out how to do the self checkout

I used the contact free pickup. i will never rent from uhaul again. If I were you, I would not use the 24/7 pickup! The manager at this place had to help me anyway. He was the BEST! Uhaul app and 800 custmer service were a huge FAIL!

Everything was well organized when I showed up and Linda was great (friendly and knowledgeable).

App didn't work so had to go inside which cost more. Employee said never works.

Nothing. Linda is awesome. Very helpful and accommodating to our needs

There was nothing inherently wrong with the location, but rather the after hours pick up process for uhaul was pretty awful. Sending instructions on where to find the truck before arriving would help. Also uploading my license and approving my account prior to standing in a dark, cold alley late at night would also make the process better. The whole thing took a lot longer than it should have.

Friendly helpful service, and the location makes it super-easy to pick up and return a truck.

The workers had no idea how to work computer, and kept complaining about uhaul. Along with regarding on not knowing how to type in my information. I told them which vehicle I wanted and they tried to give me the wrong one. And complained when I asked them to fix it. The truck key was broken so badly that I couldn't even lock to truck, which made me uncomfortable leaving my stuff moving in a unlocked car. The car was dirty and clearly hadn't been cleaned from a long time. I was waiting for for 30 minutes watching them complain and not understand how to check me in. Overall was a terrible experience and actually thought about leaving and loosing money.