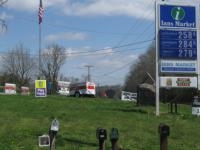 They don't start renting until 12 pm, which can be an inconvenience

The return was a nightmare with the owner/proprietor insisting I could not leave the trailer there. She along with two of her employees spent the entirety of my visit yelling to me that I couldn't do what I was directed by U-Haul to do, I left the trailer, she did not check me out, needed to call U-Haul to complete. Beyond terrible.

Tiger Express charged me with extra miles that I did not incur and charged me for gasoline when I returned the truck half full as I was instructed. Would like to talk to the regional manager as soon as possible. 412-418-5229

Appeared to be just a drop off point

I returned the truck an trailer promptly on time an the lady didn't check it in until 3 days later an I was charged 3 day late fee of $202.00 Erick( field manager) put in for $150 back but haven't received that yet. Inwill NEVER use this drip off location again. I got the runaround from U-Haul until I called the 800 U-Haul #. Went to the drop off location an woman on duty called the manage an she would talk to me or allow me to call her. Manger also said phone doesn't work an you cannot call that location. They shouldn't be allowed to be a drop off location. Eric was Supposingly left a message to call me an I have pictures of the drop off an timestamp as I felt uncomfortable at this location. Erick has not called either

Stop renting from this location. They are terrible to deal with then they try to rip you off afterwards by submitting an elevated bill.

This place is horrible. I called uhaul and opened a complaint against them and it's been a week and no one has called me. I always used uhaul in the past but probably won't again. I am extremely unsatisfied. I don't want to type it all out because you guys already have my complaint on file.

The agent was poorly trained in that she didn't know how to work the program to print the rental contract. Additionally , her customers service skills were not on display if she had any. She was rude and condescending. After I returned the rental which was the same day I get a call from U-HAUL requesting I return the unit.

They were not ready when I went to pick up. They recorded the mileage wrong and I had to pay for about 65 miles that I did not drive. There was no one there to check me in at 3:30 in the afternoon. All in all I may think twice before using uhaul again.

They could not find my reservation

First, agreed to drop off location (with-in 3 miles) would not accept the drop-off! had to then drive 30 miles back and forth to the bad location listed above. I would like a discount for the inconvenience! Steve Miggels

The trailer was green on the outside and the computer system wasn't working.

this location is good, the other location in Springfield ,Ga. is terrible and I will never recommend it to anyone.

When I got to this location I was told there was no one to check me in. It was raining and as I unhooked the trailer, a lady named Niskso yelled at me that I had to put it back further. I continued to unhook with the intention of rolling it back by hand. She returned and yelled that if I did not do what she said she would not check me in. I pushed the trailer back where she wanted in the rain and went in and talked to a lady named Liz. I have made numerous phone calls to be sure it got checked in It was checked in on 2/11 even though I dropped it on 2/6/20. I will never use that location again. While the pick up location was excellent the drop off was terrible.

Very and put her hand on me

Make sure equipment is working properly

So we made the reservation a few days in advanced, and then we went to the place to pick it up today (also had no phone call or anything to confirm my reservation). We did the mobile 24/7 thing to pick it up. We completed everything and the phone said to show the next screen to a person inside the building for the key. When we did that, I showed the lady the screen and another lady jumped in and harrassingly yelled at my wife and told her that "that phone doesn't mean anything, you aren't in our system". When I showed her the screen again with the code and told her that that's what we were given to show them. She said to look at her computer screen, does it look like we're on her screen?! I got very upset at that point and told her not to talk to my wife like that and then I called uhaul. I had to speak to 6 different people on the phone before they called her. But then she came out to my car with her "manager" on the phone saying that she has the key and all is good but also decided to tell me that next time I need to calm down and that she went next door to figure it out and everything so she did all of this extra work and jokingly said I should give her another 40$ for going OUT OF HER WAY. I know this isn't technically UHAUL'S problem but if we were in her system or whatever I would have never had to deal with her attitude. But I will never go back to that uhaul dispatch, or tell anyone else about it. My wife is pregnant and she put her in tears!

This location was sketchy and the people running the location did not provide me with any paperwork or info about the truck I was picking up. I was not given any info about the fuel or mileage agreement.

Your entire team's communication is atrocious! I chose U-Haul instead of Penske because of â€œMom's Attic,â€ but up until the day before my pick up date, the associate still could not confirm if the truck would actually be available or how far I would have to go to get it! When they finally gave me the address, it was across the street from the actual place! I called that morning to make sure it was there, the store clerk told me it will PROBABLY be there and hung up on me! Then when I got there about 20 minutes after my pick up time, the clerk said, â€œYou're too late! The lady who takes care of the rentals is gone!â€ I told her I was desperate and needed her help, so she said she'd try. After processing the order, she stripped out the blankets and dolly that were on my original order. I immediately called U-HAUL's 800 number, but because I had already picked up the truck and my order had been processed, The record of my original order with those accessories had been changed! As a result, I had to scramble at the last minute to find those items. At the end, I returned the truck two days early to the designated place. They called two days later to see if I was going to return the truck! U-HAUL, you should be embarrassed by your horrific lack of communication within your team and with your customers!

My POOR rating isn't against the location but rather the UHaul process of assigning me a drop off 12 miles away despite driving by another location only 2 miles away. Discovering this as I was on the 7 hour drive to the new house, I called UHaul, again on hold for over 30 minutes before speaking to someone. I was told it would be a substantial fee to change the drop off location as I was in a contract, a contract that UHaul decided to assign a drop off location 12 miles away. I asked to speak to a supervisor, another long hold time. The supervisor didn't even try to accommodate my needs. He couldn't even tell me the rate per mile should I go over. Simply told me I was in a contract. To top things off, UHaul had the nerve to charge me $.13 because I went over the allowable miles by .4 miles., an overage due to UHaul's drop off assignment. As a long time and frequent user of UHaul, I am completely disappointed all the way around. I will likely look for the next need to go through a competitor, which everyone knows is less expensive than UHaul.

This experience was a nightmare. First, that is not the address where one picks up the U-Haul. The U-Haul is actually across the street at a country store. The Tiger Express acts as if they have nothing to do with U-Haul yet I witnessed the man behind the Tiger Express counter bring the truck across the street to the country store. I arrived to find that no one there knew how to input the information and do the actual rental. Mind you, I had already completed all required documentation on line the night before just after getting my reservation confirmation email. The young lady in the store apologized and dismissed my predicament. I had to call corporate and be treated as if I could not read by the associate because he felt I was as the wrong address. I had to let him know I was looking at the Tiger Express signage with my own two eyes as we spoke. I have never seen such a bungled mess. The situation was resolved after about an hour's wait but it was truly frustrating. This was after two other bungled attempts to rent a U-Haul at two different sites on Friday. To say some training is necessary for rental agents is a gross understatement. Also, Eric, a U-Haul representative should follow through when he says he will set up rental abilities at these sites. That was the issue in Cummings/Varnville SC after a failed attempt to rent there. I lost another 40 minutes of my time. They were very professional but could not accommodate me since corporate had failed to do there part. My first experience the evening before included an open sign on the front of the business, a locked door, and someone inside pretending he did not see me but clearly he knew I was knocking on the door. I had to call the number on the door and finally reached an associate only to be old that location could not rent until this week. This was quite an exasperating saga!!

Picked up a Uhaul with dog hair in the seats, they changed my reservation without contacting me and gave me a larger truck, I didn't even need a truck, just the trailer and something that can tow. When I asked if wet could call other places around the area to see if I could get a truck to use instead, they said they don't do that. Bottom line, the truck was dirty when I got it, and the customer support I was supposed to receive was non-existent.