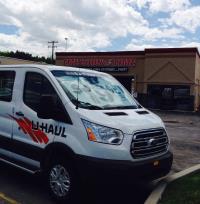 Great customer service face to face.... while this location set me up to get charged the $30 additional sur-charge for returning the truck below 1/4 tank when they gave it to me with less that 1/4 tank. If they would have given me the truck at 1/2 tank I would have only paid $10 in gas instead I was charged $40 because of the unmentioned sur- charge fee of $30. Be aware

Very hard to find. I went past it 3 times as did my friend. A more thorough description of Location would help

When i picked up the truck i did not have the blankets and dolly that i ordered. When i called them they said they didn't put it in the truck because i came to pick up my truck at 8:30 and they don't open until 10am. I had to call uhaul corporate to find someone helpful to get my dolly.

Make sure u give the people what they actually wanted this was a horrible experience I was charged 100 dollars for a 20 dollar uhaul I didn't even get the dolly I requested The uhaul came with no gas and they charged me for it. This was horrendous. when calling about it I was just told to wait. The person I talked had no clue what they were doing. I will not be using uhaul again I want a full refund for this awful experience

The pick up was easy and the people who helped us were soo nice. Thank you.

Van was not clean and there was smell in it. I couldn't able to use the van as there was curfew in the city and I returned it within 1 hour and still I was charged 50 bucks.

first of all, i understand the touchless theory but in practice, yours is flawed when you have to try to figure out a grubby lockbox to retrieve the rental key. and as for sanitary procedures during this covid situation, nothing makes me more uncomfortable than getting in to cab of rental with mud scuffs on floor, sideboards, upholstery which is an indication that not only had the interior not been sanitized as rental cars are currently doing but hadn't even been cleaned to give the impression that it had been sanitized. upon dropping off the vehicle, i was asked if vehicle was clean enough for next client to which i replied no because of the damn way i had received it and you have the audacity to charge me a cleaning fee! upon multiple messages via the app on my phone, i told the agent to call me after showing photos of the mess yet never heard from anyone so called the 1800 number after turning in vehicle and was told i would be contacted by a regional manager this week.

Self pick up was easy

Terrible customer service. The worst I've ever had with U-Haul. It took a very long time to get me checked in. No apologies, I got a very rude â€œyou're just gonna have to wait.â€ Then they forgot the furniture blankets so I came back for them. Again the woman seemed annoyed and didn't want to carry them because they're heavy. I came to get them and she tossed them in the back saying â€œthereâ€ and walked away. It was really upsetting. Also the van wreaked of cigarette smoke and the windshield was broken. There were stickers on the cracks so it looks like it had been broken for quite sometime. I also feel like I got overcharged. My check in time was when they started checking me in. Not when they finished and I returned it about a half hour after the time I said I would.

We ordered an appliance dolly and the truck did not come with one. We had to drive to another uhaul location just to get one. We had a 6 hour rental and by the time we were able to get into the truck using the Mobil pick up app and driving to another uhaul to pick up a dolly we had already lost an hour and a half. I would not recommend using the Mobil pick up option if you are requesting other accessories for your rental

The employee was extremely unhelpful and seemed to lack the basic information and knowledge needed to answer my questions. And my questions were simple, about timing with the reservation as well as where to drop of the vehicle in the SAME state. Embarrassing customer service.

The initial truck we picked up had a gas leak. Emission time was extraordinarily helpful and fast in getting us a replacement truck!

Absolutely the worst experience I've had in years. I would love to go into it in detail if you'ee Interested in knowing how your customer experience is.

The outside of the truck looked like it hadn't been washed for several trips before ours. The truck was very comfortable to travel in.

I don't know the agent but very negative and took almost a half hour to get out of the store. Couldn't see any moving boxes in store, if there was some definitely would have bought some. The clean and almost brand new truck definitely made up for it

The young lady at the counter was awful to talk with, awful to even be in the same room with. She was clearly unhappy being at work and should not be working with the public. When I asked about doing my inspection she insisted that they would do it later and that I didn't need to worry about anything. I was not comfortable with this but she insisted. I gave them an hour and a half and returned to do the inspection. Upon returning she said she would do the inspection now. When she came back in she said they were going to charge me to clean it. I brought it back clean. I don't know who did what to it in the hour and half that I had left it there but it was not me and I shouldn't be charged. This is obviously a scam. When a customer wants to walk through the inspection together and is told no, that says there's something shady going on. Not only did they charge me for cleaning, but she try and charged me 2 extra days when I only had it one extra day and turned it in on time.

I rent with uhaul all the time. This location is a joke. You should not longer let them rent out your vehicles. I had the van scheduled for Friday night to Sunday night. Two days. I got charged for four days. I got charged for pads and dollies I did not rent and I will never rent from this location again. They also won't answer their phone to let me discuss the charges.

I left the Uhaul just as I found it, if not better, and I still got charged a $25 cleaning fee.

I suppose I would. They only had 2 rentals and the rental they gave me had no gas. It was on empty when I was being charged for half tank. They didn't know how to fix it and said it was harder for them to give me other one that had gas I had to spend some time on the phone trying to fix this

I had a great experience and can't think of anything that needs changed.