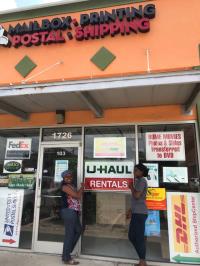 The keys were not located where they needed to be. I had to wait 2 hrs until the location opened. I had people waiting to move and I had to pay them extra.

This is the second time within a month I've been here and no one is wearing a mask. I turned in the truck with 7/8 tank of gas and they charge me $17.88 and put on the paperwork that I turned it in with only 3/4 tank.

The dolly I rented was stolen, among other items, this store has refused to provide the police with the info they need to investigate the theft because I am disputing the charges.

In my opinion, the truck should be gassed up before the customer receives the vehicle. And refunded the amount of gas the vehicle has when it returns.

The customer service rep was very nice and informative with her transaction. Thank you, it was a very pleasant and simple experience.

Thank you for everything.

Originally, parked in front, but was immediately told not to by staff, and was directed to park behind the store. I did so, and pulled into a parking spot. I was then asked again to move it to another area. Directions on where to leave it should be clearer.

awesome prices and affordable service even with out the app they take your call over the phone , great service

They were understaffed and ill prepared. Between two crying toddlers, and employees lack of communication skills I'd rather go to Iraq to rent my next uhaul.

The location was a little sketchy and having to go behind the building was unnerving; however, the quality and efficiency of the process was excellent.

I was on a time crunch. I called in to reserve the vehicle and was told I would get a call back in a few minutes after to see it up. Well, that never happened. And I advised that I was on the way. When I got there it wasn't set up. I had to wait for the clerk to get back from the store. Service was sub par. Took almost 30 minutes just to get out of there.

Location sis not have the supplies I ordered online and Owner didn't know where to send me to pick them up and wasn't able to pull up receipt online, so I went to another location and they pulled it up on computer but then directed me to a separate location to pick up my supplies.

The female checking us in was friendly and helpful because the mileage was off when we checked in and she made sure we were charged accordingly. We rent Uhauls for moving staging furniture and will be returning to this location as it was the easiest to deal with.

Truck had been previously driven at night because bugs were stuck on cab and windshield. I had to clean them off when filling truck with gas. I chalked it up to it being a busy rental weekend. Interior of the cab and truck were fine.

First starters, you could return my money to my account... This was the worst rental truck experience I've ever had (not that the others were...) and I move a lot. I knew it was bad the minute I realized the guy I made my intial reservation with never asked some important questions, like were I planned to drop off and things like that. I suddenly felt the need to call and verify what just happened. I called uhaul back and they couldn't confirm anything she says because their system was down, according to the lady on the phone, the system had been down for awhile, WoW! I start to panic because the help I got was taking time out to help me move and they were really strict schedules so I had to be punctual and respectful of that. Not only did uhaul set my pick up back an hour and change the pick up as well as the rate...the location they sent me to wasn't even open when I got their at the time of pick up. The people pulled up blowing the horn as I was about to reach out to uhaul for the second time that morning. She was really nice and I hate it that I have to mention her but after telling her how disappointed and dissatisfied I wa, she then mentioned that whoever book the reservation (with whom she supplied me the name of..) they could've given me the key to some 24hr pick up box. The tank was less then 3/4 she thought that meant I was saying it was less then 1/4 she it turned into an awkward distrust situation after sending some other "friend" of hers to check my finding. Neither knew the difference between quarters...I tried to explain what I was saying until it appeared to me they thought I was trying to cheat some system you guys have as she stated uhaul policies and business practices to me to be clear as to why she had to be accurate. I gave up to let her do her job and to avoid the confrontation. I let her document and state whatever she needed to in order to get moving as I begin to see the frustration my help was starting to display with the whole experience. I figured I would deal with it later. My wife, friends and family insisted that I call to get reimbursed. And this is all before my attempt at dropping the truck off with a trusted Uhaul representative (that never showed up to her office) some mechanic in the same building kept telling me she was on her way, stating she was just in the office and to knock harder. Which one is it??? He then later told me about a drop box on the premises (which was very sketchy like the pick up) I lost to helpers that day to time lost. Well, I've been so busy this last month and with this move...I don't have time for the games I'm sure to have to play with Uhaul, so I just decided I'd have to take that as a loss but never to forget. Like I said I move around a lot and so do a lot of people I know. I've been told of more then a few other options I have, some with level A reviews I got this email asking of my experience with Uhaul. Well, That's my experience in a nutshell w

Very nice folks, best experience yet with u haul services.. Thank you . ?????

Have the equipment ready and not other stuff tied to the truck or a trailer attached to it when it wasn't requested.

The U Haul website states that by answering questions and providing a credit card for payment that picking up the vehicle would be extremely quick. Because I was on a very tight schedule to get furniture from a store that closed at 6 pm, I called ahead to the Fredericksburg location to double check that all the information had been provided and that I would be able to pick up the keys and leave quickly. When I arrived, the clerk began asking questions about "the alternate person," when I was the only one driving or even in the vehicle, as stated when I made the reservation. The clerk kept asking questions....maddening!!...I left that at 5:53 pm!! Very late! The San Antonio experience was not a good one!

this location needs to go over the contract with the customer on the charges.

Monique was very nice, friendly and knowledgable. We enjoyed talking with her.