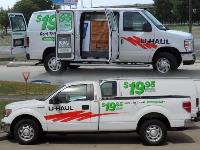 Picked up trailer and drove back, found out the door opened by its self and wont be abled to close. Had to drove back to uhaul to had it fixed.

I was charged insurance when I clearly opted out at the time of rental. The parking lot is very small as well...

Drop off was fast, friendly, easy and courteous. Thank you UHaul. Blessings

Had a bad experience with one of the managers (white male with dark hair) harass me for 15min after I paid for the truck rental and got the keys. He cornered me and kept insinuating that I stole the keys and wouldn't let me leave until he went and checked the reservation again. Very dissatisfied with this service, I will never plan on visiting this uhual again. It's obvious that that guy is driscriminatory as I did not see him ask anyone else to verify their reservation if they had the keys present. This guy should be thought a lesson for sure

When I returned the truck in Austin, the manager was extremely rude. There was a line backed up to the street, so I moved it to a parking spot. The manager stated "you need to move it here". Then he tried to charge me for gas when I just put gas in it. I put $15.00 in, but I guess the amount was a little below what it was supposed to be. He then tried to charge me to fill it up completely. I asked him if the smaller van would have gotten better gas mileage. He said probably, but "you should have taken that up with the pick up location". At that point I was tired and frustrated and lost my temper with him. I went into the store looking for the manager to complain, but I was informed he was the manager. He then came running in like he wanted to fight. He stated I don't get to yell at his staff. This was a false allegation, since I just asked her for the manager. I told him I said nothing to her and that he was the one I yelled at. First of all, he can't tell me what I don't get to say. I am nearly 60 years old and don't need some punk about half my age given me trouble. He appeared he is either power hungry or hates working with customers. If that is the case, he needs to get another job.

Chris, the UHaul team member who assisted me, was incredibly rude to me. After a hectic morning, to be so poorly treated just made an already stressful day even worse. When I first arrived, he was dismissive of my needs, rude when I asked questions about the contract, and rude when I asked if we could adjust the time since my pick up time had been delayed due to Uhauls' scheduling issues. (By the time I spoke with him, UHaul had already rescheduled me three times and I had driven to two locations that supposedly had trucks for me, but in reality they did not.) I know he was not responsible for my frustrations, so I made sure to not allow it to influence my interaction with him. Later in the day, when I was returning my truck, I needed to switch my card because my original card had been turned off due to a fraudulent charge. The team member who originally helped me did not know how to update my card information, so Chris had to help me again. He was incredibly rude throughout this interaction as well. I understand that Covid is a difficult time for everyone, but I also think we should all do our best stay in the best of spirits especially when interacting with stranger's whose days we unfamiliar with.

My experience with Uhaul was poor. I selected an 8 AM "hands-free" reservation time, but this location did not open until 9 AM. There was no way to get the keys for the rental until 9 AM, so we were delayed an hour when we had movers coming at a certain time. I don't understand why I would be 1. allowed to register with an 8 AM time for this location and 2. be encouraged to do a hands-free pick up. Once the store was open the man who helped us was incredibly RUDE and NOT helpful. Absolutey will not be using these services again!

Thankful for the front desk service as the store location.

Brittny was great. She hooked up the trailer, checked the lights and I was on my way. I love it when people â€œbreak the moldâ€ . Tough as nails with the strength of a bodybuilder but looks like a girlie girl. Best customer service I have received in years. Didn't expect it from a UHaul employee. Thx Brittny.

I am so thankful that U-haul is always the easiest part of any move- The last thing I want is complications with picking up the truck before the move even begins! Easy pickup and after-hours drop off makes me not look anywhere else when in need of hauling my stuff!

When i made a booking it was confirmed and 2 days prior to getting the truck it was canceled because i did not â€œconfirmâ€ it. I booked through the U-Haul office location and not online. The employee must have made a mistake. Luckily i managed to book the same date/time but it could have been a disaster if no trucks were available

The wait was a little long in the morning to pick up my reservation. Only one person on duty, two would have been ideal.

Although I felt that the location was understaffed for the total number of rentals they were processing, Christopher did an awesome job of communicating and ensuring I was set to go at my pick up time with a clean truck.

No fault to this specific location but the truck I was assigned was crap and needs to be depleted. It was rough, loud and squeaked, had a bent frame and drove like no other Uhaul I've rented before. Looking at the speedometer it had 178,000 miles. Time for this thing to be retired.

Staff was very helpful. The issue is that no one called the day before to tell me I was supposed to pick up at the Lamar location. I went to another location first.

The gentlemen who assisted me attaching my auto transport was excellent!

When I couldn't pay the full amount, they told me about the promissory note option. Wonderful folks, helpful too!

Hi I did not have a good experience at this location. The employee was having persona conversations with the customer ahead of me. The truck that I reserved online was not on the lot and for an hour an alternative was not made for me until I got to the store. Also the employee originally was resistant to helping me find the truck on the lot. The back door was not closed and the two dollies that I rented were not present. When I returned the truck, I had concerns and wanted to talk to the employee who was inside, although the lights were off. This experience made moving a more stressful experience instead of easing my stress. I would not come here again.

Both employees were extremely kind and professional. I was checked in by the gentleman, who explained the entire process thoroughly. Great experience. So refreshing encountering truly kind people in the middle of a very hectic day.