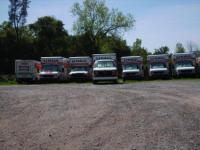 Ray's great, just remember he's closed on Mondays. I wish he had a large open trailer to rent...y'hear that uhaul?

Ray was helpful and the trailer was in fine shape for the job. Thanks.

Profane, uncaring, unknowable, rude, no internet, has hitler quotes and swastika on wall. Go see for yourself

If the people taking the truck at destination are not open the day you turn in the truck, this should be stated beforehand by UHaul--I could have turned it in a day earlier had I known the Browns Valley agency was open Sunday but not open Monday--just a drop box--now I have no evidence of if I was charged for anything beyond base and why--no inspection--so I cleaned the truck and filled the tank 5/8ths but may get charged anyway and cannot challenge it. I still have not received a receipt for the truck costs. This is not the local guy's fault--this is UHaul's incompetence.

The gentlemen was very helpful!! Thank you!

This site only had two U-Haul vehicles on site the day I was there. It was more of a country feed store than a U-Haul site. I originally wanted the Yuba City store, but was diverted due to a lack of 15' trucks.

Easy in and out. Prompt and very courteous.

Had to back track 10 miles for gas due to the truck having only 5/16th gas. Waiting additional gas just to fill up truck. But most importantly, wasting time.

S. Pacific Hwy in Medford was a great location, close to where I live and loaded. Sherry was extremely helpful. Liked her public relations.

I wanted my pick-up in Grass valley and it was approved in Grass valley. I got a call and was told I have to drive 31 miles to get my rental! No sorry or even a rate reduction!

Ray was very helpful with the trailer rental.

Ray is super nice and we had no problem dropping off the truck.

Please update your website so that when someone reserves a truck there is actually one available for them to pickup. I drove to Yuab City which is over 30 miles from my house to pick up a truck and I couldn't pick up the truck. After I spent 30 minutes on the phone less than an hour beforehand talking to a rep to confirm my reservation. I was promised 60 miles would be included in my rental and they weren't. I was also told that I would get a $25 credit on my account and I didn't. I will not be using Uhaul again because you are unreliable and almost ruined my entire weekend and wasted hours of my time.

The guy at counter was rude and uneducated and made the experience awful . from the moment we entered the dirty store i felt my business was unwelcomed. He told me i could call a number to drop off the uhual and when called the office was closed till the morning after i specifically requested a late night drop off. I would never use this place again and i will telll everyone who will listen.

Because U-haul does not deliver the equipment to this dealer they had to go out of there way to get this to me in a short amount of time. They seem to care more about there customers than U-haul central.

It would be good to have more open trailers at this location. It is very frustrating at times.

The pickup location was dirty, dusty and disorganised. The trailer it's self was dirty and no hand crank so it had to be lifted onto the hitch by the employee and my friend. Terrible expierence.

Ray helped solve a problem with the main uhaul office that was very frustrating. It took some time to get through but not Rays fault at all.

I rented a truck for a couple of days for a quick move. After leaving the location and packing up the truck I was contacted by U-Haul asking a favor if I can return the truck to a location that was 47 miles further than the original drop off. I agreed I figured it was a nice thing to do because they said they had no space at the other location. I explained that I picked up the vehicle with half a tank of gas and the gentleman explains no don't worry about the gas and if I could even bring it back the next day so I agreed. When I returned the truck the gentleman that received it we're all standing outside smoking a marijuana cigarette. When I went to the counter the gentleman looked up the notes and it said nothing about the gas. I explained to him in commonsense terms why would I pay for the gas to go further to do you a favor.. he told me â€œI'm stuck paying because he stuck driving to the gas station â€œ. Then he had the audacity to say that my vehicle smelled like marijuana which is truly absurd. I later get an email saying there was a cleaning charge and a fuel charge added to my account. I then contacted my bank and told them to dispute the charges. I grew up in the Bronx next to the original U-Haul I can honesty say I have great relationships with the workers.. and I've never expected to be treated like this from u-haul. As always when renting a vehicle I have a video I took to show no dents, and that the truck was left clean!

Ray really came through for me. I was promised a truck at another location and when I went to pick it up, no trucks were available. I had to spend a little more money on mileage to get a truck from Ray, but it was worth it. Ray was my sunshine on a bad day!!