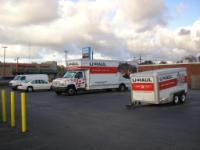 Fix the alternator. The truck died and cost us 2 hours and some extra helpers on the other end of the move.

Go out of business!

I would put policy in place to prevent people from smoking in your vehicles it is ashame the vehicle had less than 4000 miles and smelled of cigarettes...

Customer service desk needs improvement. Could also use a sign to designate where to go for u-haul help. The lady that took care of me was very unprofessional. She probably shouldnâ€™t be working at a job that deals with customers

The service provider was rude and gruff. I was charged for gas at an exorbitant rate, when I put gas in the thing before I returned it. I will not be renting another uhaul anytime soon.

This has been the only location that makes renting a truck seamless! They explained everything very well and didnâ€™t rip me off like the last place. I highly recommend renting from this location

Easy drop off but the business is busy with other business.

I arrived to pick up auto hauler trailer. The right hand side turn and stop lamps were not working correctly. I was told they would call the repair person and they usually were there in the hour. U-Haul called me and asked why I had not picked up the trailer. U-Haul had no idea the trailer was not road ready. I was told I would be called when repairs were made. I never was called, I call Ace Hardware. I waited 4 hours for a trailer that was suppose to be ready for me, and I had to call the U-Haul provider. When I went there the second time, they switched trailers on me. This trailer had no front wheel straps and was not road ready. The first time I was there one of the Ace Hardware employees told me the straps were missing from the trailer yet the trailers were switched. I had to point this out to the employee. Fortunately the first trailer was repaired and it was hitched to my truck. When we went back to their U-Haul desk, I received an email from U-Haul asking me to verify the equipment condition and sent pictures of the trailer. The pictures were not even taken in Ac Hardware's trailer lot. It has become very obvious that the new rules imposed by U-Haul make getting a trailer more difficult because they had no idea of the condition of the two auto haulers at this U-Haul rental business and it cost me time. I think it's time to purchase my own auto hauling trailer due to the current situation where equipment that is reserved is not road ready and no one at U-Haul or Lake Station Ace Hardware had a clue of how equipment was received with something broken and did not have it repaired.

Have employees make proper refund my prepaid was $108 when I returned it he said my bill was $85 and he would credit the rest back to the card and never got back to the card he's gained the receipt he said it was done electronically I never got a receipt I am very upset and I'm pleased with U-Haul!

Nice big drop off yard. Enthusiastic youthful help. Apparently there was a system-wide crash, but because I had the paper copy of the contract, drop-off was easy-peasy.

Customer service was horrible and the truck needed many repairs and cleaning.

Staff and owner were congenial and very helpful. Would definitely rent from this location again, however Uhaul doesn't give you that choice when renting a trailer. They call and let you know where in the area your trailer is available. At least that was my experience, but these people and this location were great for me!

I'm so very glad I rediscovered renting from Uhaul! Reserving online made it super easy. Renting from the Lake Station Ace hardware store was so very convenient, the folks at the store are so very pleasant to work with!

Being a store and U-HUAL I'd say have more staff trained on both cause it was enough associates in the store but I had to wait for people to be rung up for store products. It was an overall nice store though. Time for me that day was of the essence as i decided to move that day. Thank you overall you were great!

Have equipment that your client reserve and you guarentee to have for him or her ready and not to inconvenience your customers like uhaul did to me when I went to pick up my rented and paid for through Express checkout !! Then you have guaranteed me if not available at the place of pick up that uhaul will issue a $50.00 credit card or such,but that didn't happen when I acquired about it because the personal at Uhaul told me I don't qualify ! Very disappointed with Uhaul and how they handled it ! Originally I was supposed to get the dolly at 4:00 p.m. and I checked out at 4:13 p.m But it was the wrong dolly stock number then the owner wanted me to take that dolly that had lights that didn't work to another uhaul to swap with a different dolly ! I told him that it's already 5:05 p.m. now and I have been here for over an hour even though that I did Express checkout on my phone hours before the pick up time ! But now here I am waiting . So the owner of Ace hardware that has Uhaul in his establishment took it upon himself and went and gotten the dolly from a Uhaul store in Merrillville Indiana. By the time he gotten that trailer and me getting the dolly it 6:35 p.m. now all my plans of getting on the road gotten screwed up. They shouldn't have uhaul at their place and I would never go there again !! Hopefully some thing be done as far as me getting what I was guaranteed in the 1st place !

The inside of the cab needed a wipe down and to be vacuumed. There was old food stuck between the seats. The exhaust on the truck was defective and extremely loud causing more fuel use.

At the Indiana location everything went fine and there were no problems. I spoke to a woman on the phone and she was very helpful.

Great customer service! Helped wth tow dolly even though the other place never checked it out.