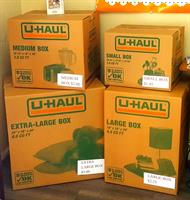 First and foremost there was no one there I could talk to as I need assistance with payment. I called the phone number given and, even though I was in the normal operating hours timeframe, on one answered the phone or called me back. Not only that, there were other customers wanting to talk to an employee with no luck for them either. I eventually had to call Uhaul to complete the pickup the next day. Horrible customer service! My advice, do not use the Modesto Mini Storage or anything Uhaul or storage related.

I had to go to this location after the Tio's location charged me for a dolly and failed to give me one. The standiford location was awesome, the girl working there was so incredibly nice. Definitely recommend!

I had ORIGINALLY ORDERED MY TRUCK PICK-UP out of the Manteca location, but when I arrived there, I was told I was suppose to pick it up in MODESTO?! Our storage was at Uhaul Dublin, who did not have any trucks available, so Manteca was next closest location. This un-notified CHANGE caused us to be UNABLE TO EMPTY OUR UNIT due to the extra time it took to drive to that location and then back to Dublin storage, where the access hours changed from 10:00PM to 7:00PM some time during the pandemic? This all caused us to be BILLED for another month of storage at Dublin facility, when we were planning to vacate the 19th. The Dublin location was no better - I attempted to contact this location days prior to the 19th, to request a 15 ft truck and inform them of our planned move out, but got no replies to emails nor return calls, BUT INSTEAD, received a RECEIPT for the next months storage charge?! So instead of replying, they just BILLED us for the next month?? As it is, I feel we are entitled to a refund of the final billing as the unit was empty ONE DAY LATER!! (or pro-rate the one day off the billing) ANYTHING to make us want to be return customers!! Almost forgot - BECAUSE we could not get the 15 ft truck we needed, we also had to rent an OPEN TRAILER to tow behind the 10ft truck, but IT could NOT be a one way rental, and we had to RETURN the trailer back to DUBLIN Uhaul 2 days later. THIS WAS THE ABSOLUTE WORST EXPERIENCE EVER WITH A TRUCK RENTAL/MOVE!!

The office lady was very nice, but the person who rented van was very late. This was not the company's fault. The van was very dirty on the outside, could barely see out of the windows. Also, the location was hard to get in and out of. My experience was just average, and I would still rent again from them in the future.

I can't think of anything. Very professional, prompt and FRIENDLY.

The woman who assisted me was very nice & very helpful. She deserves a raise. And she was beautiful

I was told When I rented the u-haul to drop it off at a different location because they had to many trucks, so when I went to drop it off at another location they wanted to charge me $300 instead of $30 and said she knew about it she just didn't want to deal with the trucks, ridiculous had to waste more gas in the U-haul driving back and forth and got charged for the extra gas as well very bad experience from the company off Standiford I will never go there again the lady seemed so lost and unorganized

Turning in was not easy, but a lot of that had to do with the coronavirus

Let people know about registering before pick up. Also we returned the truck with gas but they still charged us a ridiculous amount for 1 gallon of gas.

More parking spaces it's to small hard to park

No issues. Staff was great and went above and beyond

Trailer was clean but the maintenance was not kept up the tires were out off balance or bruised and one was showing the wear bars which i didn't notice until after I had loaded my vehicle on it. When empty it wasn't noticable. I was barely able to make 45mph without having a serious vibrations on the right side tires of this trailer. I've rented many car haulers from Uhaul and never had a issue until now.

I confirmed with an online chat the location and time to pick up the uhauI. I got there and they said i wasn't in their system. I was scheduled to pick up a van at 12 for 8 hours with a printed out confirmation page confirming an 8 hour rental. and had to return due to something on their end. I had to return after work, When i went back they charged for two days instead of one and still didn't have the appt in their system.

Representative was very helpful and friendly

First time at this location.had a 11:00am appt.Called and inform rep.I was running a few minutes late. Arrived by 11:15 ish.. rep.asked how long did i plan on keeping the truck. i asked don't we get 24 hours.She said yes,but ,you need to have it back by 11,bcause,we have sat.resv.for 1130. .brought truck back by 1125,and went in to pay and noticed 1130 resv.had not arrived. And she stated,if they had been here waiting,you would have had to pay for an extra day! I was floored.i said any other uhaiul,i've used .you get grace period of at least and hour or more. Another young rep chimed in,you should probably have went there. I did not respond,because i'm under enough stress,and it could have got real nasty and ugly from me..I just assumed that all uhauls have a return grace period. I was not rude with the staff,i just wanted to know the policy.

A fantastic location, the staff was very polite and helpful, the van I rented was oerfyfor my in city needs, I would truly recommend this location, thank you Joleen for your awesome help...

Joleen the Ofc Mngr was superb! I could not have asked for a better service experience. Joleen was very genuine and treated me like a good friend and not a customer. Thank you again Joleen!

I appreciated the kind, quick and efficient service I received, would definitely recommend this location to friends.

Jolene was excellent, she made me feel very welcome and she attended to every need.