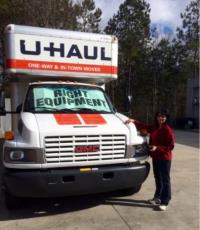 See above comment. We shouldn't have even charged that extra fee

Dont charge people $20 for turning their truck in!!!

Im sure this location is fine normally but this was my first experience renting a U-Haul and the pick up process was a nightmare it took over 2 to rent the U-Haul because the system was experiencing issues. And once we got the truck successfully rented it took another 30 min to get the dolly rented. This all after i was already charged for the equipment. The rest of the move was fine but i feel the pick up process was more difficult than it needed to be and ultimately set my whole move back longer than it needed to be.

The 6x12 trailer had not been swept out. The super lady in Murrayville Ga rented me the trailer that has no jacking system like the open trailer sitting right next to it. Having a bad shoulder we were lucky to have some helpful convenience store customers willing to help.

The attendants almost would not let me rent when they put incorrect information in the system although I had already pre reserved and checked in. Drop off was the same. They were open but the attendant told me they were closed and I could not drop it off.

This place should be removed from the uhaul family. They have no clue what they are doing here.

My reservation was changed to another location while I was in route to the original location. Once I arrived I went inside to get the keys of the vehicle and had to speak to someone on the phone asking me to come to the Valero down the street to complete my paperwork. I drove there and completed the paper work and had to return to the other gas station to get the keys. Extremely inconvenient! Then once I returned the vehicle I had to once again speak to the person on the phone at the Valero. She told me that I would have to wait until the next day to receive my return paperwork via email. I had to call two days later to remind them to complete my paperwork and was asked to call back in 5 minutes. After I waited about 20minutes or so I attempted to call back and got nothing. I attempted again and again with no avail. I received an email finally about my return confirmation with final statement. Very poor customer service!

Pre-payed and clerk was totally baffled; reservation location changed day before pick-up; no blankets; if I had been 15 minutes later a uhaul field rep would have taken the trailer-he came to get the trailer as I was hooking up

Everything! I had to go to two locations to pickup the truck. The people working at both stores were rude and confused. All I needed to do was pay and get the keys but they sent us back and forth and had us on the phone for over an hour! Finally get the truck and it only has a quarter of a tank in gas in. Overall terrible pickup experience.

Truck cab smelled like an ashtray. Location attendant was constantly on personal phone. Didn't have all equipment on hand to fill reservation. Took nearly 30-45 minutes to finalize pickup of truck.

This was the most horrible experience. Pick up was a nightmare, sent me 20 miles from desired pick up, and not given addditonal miles, then I could not get in the truck for 2 hours after scheduled pick up time. It took talking to 7 people on the phone and 2 gas station attendance to get into the truck. I was finally able to get the truck after the attendance told me I would have to wait until all of the Friday afternoon lottery ticket customer were taken care of. I was over charged by 20 dollar from reservation price, and charged extra mileage even though they sent me 20 miles out of the way. Drop off was equally bad. The person for U-Haul was not present at the drop off location and the 24/7 drop off wouldn't work in my phone even though I had the app, full cell service, and my location setting on, still the app said my location could not be determined. Finally, I was able to talk to customer service who instructed me to take pictures for my records and leave the key in the drop box. I asked to be compensated for this horrendous experience and still have not heard back from district manager. My brother is moving next week and I have advised him that under no circumstances should he rent from U-haul and that he should go with a different company. I am extremely disappointed with this experience and would like compensation if anyone bothers to read this and actually cares. I will discourage everyone I know to NEVER use u-haul.

My experience was better than expected. I was disappointed that although we were told to leave 1/4 tank of gas in it when we filled it up we had no idea how much it would take. So when we returned it we had actually had almost a 1/2 tank of gas in it. I would have expected some credit for the gas but we didn't get that at all.

The owner of the location that I rented the truck from had my vehicle towed costing me $195 and had me stranded for three hours as well!!!!!!

Poor customer service. Have all employees trained on how to rent out the uhaul

My only complaint was there was only one person in store trying to help me and the other regular store customers to.

Haven't had the best experience with my few previous rentals and assumed it would be the same when I walked in today. To my surprise, these folks were efficient and knowledgeable about the process, had and excellent transaction and experience. Would definelty pick this location again thanks!

We dropped off at Texaco Food Mart in Murrayville, GA. We called this location the day before drop off, a woman named Barbara said yes, it is okay to return the trailer here, we will be here. When we arrived to drop off the trailer it was raining, I backed the trailer into their lot as best I could then went in to do the paperwork. The woman at the counter said yes, she was Barbara but NO, SHE CANNOT UNHOOK OUR TRAILER FOR US, SHE SAID SHE IS THE ONLY ONE THERE AND CANNOT UNHOOK IT, WE HAVE TO DO IT OURSELVES. I have a bad back and my wife is 65. So we both got out in the rain and unhooked our own trailer !!!! THIS IS UNACCEPTABLE ! If they cannot provide even the most basic service they should not be an authorized U-Haul dealer. I feel like we should receive a refund of our charges for being treated like this.

Rented a 6x12 enclosed trailer. The trailer tongue was on the ground with no way to lift it. The dealer said it would have to be lifted by hand and placed on the trailer hitch. This was not possible and the dealer refused to help and offered no solution. After finding some scrap lumber and broken concrete I was able to use a 2x4 as a fulcrum to lift the trailer and used other scraps to block up the trailer tongue. If I wasn't on a time restraint, I would have asked for a refund and went somewhere else. I will never use this location again.

The truck performed very good. It was a very good experience

I had an excellent experience. I would gladly go back if in need of another rental.

I had a very pleasant experience and will use again. The service was fast and efficient.

She would not answer the phone. She hung up on me.

I think this is a corporate issue - the location did not know that i had requested a hand truck and furniture dolly.

I HAD TOLD THE STORE 3 TIMES 5.30P.M SHE HAD IT DOWN AS 8AM....ALWAYS TRYING ADD MONEY FOR HER STORE ....NO CLUE WHY THE DAY I WENT SHE TOOK DOWN BY I.D. & credit card number then the day I picked it up which was 2 days later had to give it all to her ahain..i haven't checked it a total that I was charged yet..