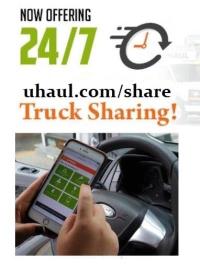 I booked a truck online and it still took nearly 30 minutes to get everything completed in store. Although I checked the exterior of the truck and submitted pictures where things looked different, when I got to my home and opened the back door, the inside was soaking wet and I had no choice but to use it as I had paid for movers . When they were done loading the car, the door would not close and I had to wait nearly 2 plus hours to get roadside assistance as I couldn't drive away to my bed home since the back door was open. I ended up having to cancel the movers waiting for me at home and was out of $200 as a result of renting a truck that likely should have been better inspected to ensure that the pulls were on the track â€”something that a customer would likely not be able to catch. Overall my move had unnecessary stress and loss of money, plus having to move furniture on a bad back myself due to a faulty truck and so I would not use U-Haul again ever .

Service was very efficient and person that rang me up was fast and friendly . Very happy with service. Super easy and will highly recommend

I was double billed and the location hasn't responded to my complaint.

Terrible customer service. I did an electronic check out and declined additional coverage. The coverage was added at the local branch when I picked up. I was not informed. I called 3 times to complain. The first time I was told to call back. The second time I sat on hold for 20 minutes and hung up. The third time I was put on hold for 10 minutes. Some one picked up the phone, took some information, and then put me on hold again. After 10 minutes, another person picked up and told me that the original person had to 'run out'. The new person said he couldn't help me and that they would 'call me'. Take a guess...do you think anyone called?

only thing I didn't like, the car had a strong cigarette smell

Pay attention to the return times. I was charged for a 2 day rental when I only had it for a day. However, after I went back, Andrew corrected the error and everything is good now.

This is my 3rd or 4th time using U-haul and the first time was the ONLY time the 24/7 Ride Share actually worked and the keys were in the truck. What's the point of this service if it never works. I always have to go in and pick up the keys. Normally I don't mind but I requested this option this time because I was leaving early before U-Haul opened. I was then forced to wait until 9 when they opened to go in and pick up my key. Other than that everything else runs smoothly, except the U-Haul app. But this survey isn't long enough for that complaint. Just wish the services offered actually worked for the convenience.

The equipment was clean. But it stopped working and needed a jump...or curbside assistance. We got the jump but it was an inconvenience. Also I know we are in a Pandemic and businesses are closing. People find themselves in the position of having to move. But I noticed your prices have risen. There is no longer a window for mileage. Smh.

The staff at the site on 20th street are incredibly rude and incompetent. Two staff members, Erun and David Y. refused to assist me in setting up the two dolly for my car. Both men cited they "didn't know and it wasn't their job". David said I would have to stay at the site and wait for an afternoon attendant to come and left to "get to his second job". I waited at the site from 11a- 4:30p. WITHOUT help. Erun the counter guy was apathetic and dismissive of the fact no one had been trained or knew how to hook a car to a car tow dolly, yet worked at U-HAUL! This was one of the worst experiences of my life, i was supposed to move that day but because of delays with uhaul I was cost additional money, time, and stress on the 1st day of the year. I have depended on Uhaul for EVERY move, and this move across the country was supposed to be a fresh start. Instead I found staff that basically wanted to sit at the desk, and not deal with customer needs or supporting clients in receiving the proper equipment. I had to take my car to a MECHANIC SHOP to have it properly set up. I am so disappointed, and frustrated by my experience I think David and Erun need immediate dismissal. There is no way you can work at a moving and storage place and force customers to load their own cars. I ended up crying on site from the stress, I have never towed a car and I needed to get from Philadelphia to Ohio and then Pittsburgh while employees watched me youtube and self teach the load the tow dolly. I cannot express enough how HORRIBLE this location is, their staff, and this experience. I would never recommend this site, or uhaul again. It's 2021, there are definitely other moving companies.

Why is there even a person behind the counter if I have to do all the work to check in and check out? You guys should PAY me to do the check in/out process. Totally absurd.

The experience overall was very good however I did not like how they were not accommodating to my personal preference to the specific van I wanted. They insisted on renting out based on â€œrotationâ€ rather then the van I asked for that was sitting on the lot.

Our rental was reserved in advance for 10:30am, but when we arrived to get it we were told that it would not be available until 12pm due to the only person at the location who was able to process the rentals having left to unload a truck. Worse, I felt incredibly belittled by the employee left up front, who initially said to come by at 11:15, then extended it to 12pm while I was still talking to him, and brushed me off when I was confused and annoyed by why on earth the one person who can't do anything at the register would be left up front, rather than maybe have him unload the truck- or maybe unload the truck when you don't have reservations waiting? I was an hour and a half late on an appointment that only took a half an hour to complete before I was returning the truck to the site. This was entirely too expensive a rental for such a short trip and for the horrible service I recieved there, and I don't plan on renting with you again.

I was greeted by a very rude employee. You couldnt understand him and he got frustrated at me cause I was using credit not my pin & transaction kept cancelling. His tone was like he had no time because he was too busy on his phone. Rented equipment left counter brought out my items dropped them on ground, He mumbled truck had less than half tank of gas bring it back w/same, miles out. His demeanor was disrespectful to customer.

I had a pretty good experience with you 15' moving truck. I was disappointed in the fact that the truck had almost no gas in it as you can see in the photo I took before leaving you business. And not real happy with the 8 he truck use it should be at least a 12hr window. The 8hrs makes it very stressful getting moved and returning the truck in that short time. Please rethink the amount of time so people can enjoy their move without being stressed over truck return. Thank you Anthony

Your representatives have poor customer services. When we got to this location and tried explain our concerns, issues and conversation we had with the representatives he asked us to stand to the side and call the manager we had spoke to over the phone over the cost of the rental. He was rude and dealt with people as if he was a robot with no emotions.

This was a horrible experience overall. The associates were completely unprofessional. I was charged twice for the same rental. When I brought this to their attention they said I was wrong. Neither of the associates practiced social distancing or wore masks while they were helping customers.

Give ash some more help

David was very nice and helpful.

You can improve for the next customers faster service.

Staff at location were very helpful. Overall, very unsatisfied with U-Haul's procedures and policies overall. Costs were not clear and comprehensive throughout the process, and if I had been aware of all the additional charges and headache I would have encountered by choosing U-Box, I would have went with Pods or another reputable moving company.

The two associates working at the store yesterday could not have been more unprofessional. The three associates did not wear masks while they were inside or outside of the facility. They did not make even a minimal attempt to practice social distancing with customers. The three associated used excessive profanity while in the building directly in front of customers. They also screwed up my reservation two times costing me an hour of moving time. I will never use this facility again.

Nothing. The service was done with professional efficiency.

There was some type of coating on the outer windshield making id difficult to see through. 2. During the return of the vehicle customer service was very unprofessional. There was an issue between the two front desk employees. I was treated as if I caused a work overload between the two of them. I strongly suggest that your surveillance be reviewed from the time My daughter and I walked in.

The customer service at 2990 s 20th St was not good at all. Wait for a long time and the representative was inefficient!