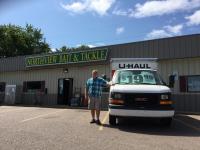 This location was great and the regional manager Devon was also great. With this being said, the customer service agents that I spoke with who stated they were with corporate were very useless, had bad attitudes so they must hate their jobs or need to find a new one.

Not this office's fault but Please fix the App. I dropped it off last night and was unable to check it in on the website or the app. I did power cycle my phone too. I would get to the end of the check in and it would start all over again

We have been using this location on and off for 9 years and the only reason we go back is bc of the service. We needed a Uhaul several times this year and so we went back this year and I don't know what happened to this location but it's super sad and the customer service is definitely gone down hill. This last time I was in yesterday will be the last time I EVER go back unfortunately. I was told that the 10ft truck is a seater when it's clearly not. We even knew that. He gave me keys to the truck and I went to start it and it wouldn't even go in the hole (wrong truck). anyhow when I brought the truck back I wanted to be personally checked in and made sure it was not left overnight bc it was under my insurance the guy kept insisting that I leave and he will just check it in the morning when he gets back. I didn't want it to sit overnight outside and he didn't check it in yet when they were gonna be open for another 45 more minutes. Just lazy. He would not give me a printed copy like every one else he sent it to my email. Just overall the worst service EVER. I use to consider this place a â€œhidden gemâ€. But I don't know what happened. Maybe they have new owners from the last time I was there. It clearly shows. We use Uhaul alot so time for a new place.

One truck did not start. The card reader failed had to run the entire transaction again.

The wipers where bad and windshield washer didn't work

The lights on the trailer went out sometime during the trip and was stopped by the highway patrol. That was exciting.

The utility trailer was excellent for transporting a motorcycle. The trailer was rock smooth the whole time.

Everything as far as picking up the truck was fine. But once I went to a different location to gather the storage unit information, it was not explained to me. All I received was the PIN number and that's it. Once I arrived to the storage units I then received a call from UHAUL staff apologizing that they did not explain anything and still did not on that phone call.

The owner northview bait and tackle in Sioux falls South Dakota, the location I picked up the car hauler that would be the bait and tackle shop was by far the kindest and best person I've ever dealt with while doing with you guys.

Nothing, the owner of Northview bait and tackle was very helpful.

The truck wasn't clean. We found dirty tissues in the cab so, had to clean and disinfect.

Nothing! I arrived at 10:00 AM as scheduled. Nate checked me in and away I went. Returned vehicle around 2:00 PM Nate checked me out. No waiting, everything in order. He was professional and knowledgeable. Will rent there again! Charles Boese

The employee just asked if I was dropping off a truck and then asked for the key. He said that was it. I was done. I asked about checking the mileage and he said he'd get it. I felt uncomfortable not having him look at the truck while I was there. So I asked for the key and went out and wrote down the mileage and took a picture of the blankets and appliance dolly laying in the empty cargo bay. A little more customer service would have gone a long way.

Location was great. Staff was extremely helpful. Truck was as advertised. Check engine light was on when I started truck and employee came out and checked out the truck before allowing me to take it. Will rent from this location again.

The truck I rented was dirty inside and out. Had to sweep cargo area before I could load. Plus came with a pickle some ketchup and a chewed piece of gum in the cup holder. Truck belt squieled the whole time. I had to fight to keep the truck on the road and out of the ditch the whole time while driving. This rental should of been free!!!

Interior of truck was not clean when I got it, I bought wipes and wiped down the entire cab. There were crumbs from a previous trip in the windshield and 2 receipts for gas left in the truck as well. Super nice young man running it, easy to work with and helpful but it may have been a quick turn around.

The left turning signal was out to I had to drive behind the trailer to ensure we could signal when turning. When we told them we were moving to Lousiville Ky, they gave us a drop off location in Indiana, 30 minutes away. When we called to reschedule the pick up at a closer location, the lady we spoke to at this location (6456 Outer Loop, Louisville, KY 40228) was very rude and acted like this was a huge inconvenience for her to deal with and if she did, she would charge us a fee for having to do so. She then transferred us to someone else who said they had no idea how to help us (but she was nice about it unlike the first gal) and then transferred us to a third person whom by that time we had given up and just took it to the registered location. We've used uhaul many times before and this is by far the only/worst experience we've had.

Always friendly service at this location