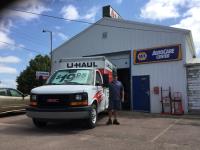 Have some issues with the overall bill but other than that I think we are good.

The pick up location was dirty. I do not approve of the pick up location being changed without my input. There was a reason why I selected the original pick up point and not the pick up point that U Haul changed while en route to pick up the truck. The inside of the truck was dirty. There was liquid residue on the cup holders and a splatter of dried liquid on the inside of the windshield in front of the driver seat. Found an empty bottle behind the driver seat. When I opened the back of the truck, there was trash inside.

Helpful and accommodating. Equipment was clean and well kept. Easy to use.

The location and personnel were good. However, we attempted to pick up the truck before hours and the 24/7 system was down. We had to wait for it to come back on line and had to delay two sets of movers and get a later start because of it. I suggest you get a alternative system in place so you can take care of your customers when they need the equipment ASAP. Not happy about that!!

Our pickup time was changed to 2.5 hours later at the last minute. We had to call & try to get a different pickup location which took us to A Plus Auto Techs. It also wasn't explained very well that we had to check in online so we were surprised to get to the location & find nobody in the office.

Not a very well kept area. I had never returned a uhaul before so was not sure what I had to do. No one answered the phone From the number listed on my contract. . Faded Almost unreadable sheet of paper on the business door. Believe it said due to COVID they could be reached at such & such number. Person who finally answered was very curt said he'd be there shortly & basically hung up on me.

This place is a dump. It's dark, dirty and smells inside and from the outside it looks like it could fall over with a stiff breeze. I would never rent from this location again

No one around when I arrived. I did arrive 45 minutes early.

If you say you'll have a dolly or a padlock you should have that. No one should get double charged, but we did and it sat like that for days.

I had a reservation for 9 when they open I got there and the place wasn't open. When I called the owner said he had errands to do and will be late.

My only complaint is your web reservation system. First place would not give me a price but a error code ( found out talking to them they were closed during my rental period). Second place worked fine, I thought, as I reserved the unit for 24 hour period. When pickinging up I was never informed the contract would end at 12pm (20 hrs) because the rentL place was closing at 12pm. Understand my surprise andconsternation when the text was received that my turn in was at 12pm and I didn't even see it until 12:30pm while I had just arrived at the unload location. I'm very unhappy about that.

We broke down due to a blown tire 3 hours into our trip. After 2 hours, we were then brought the wrong wheel since our original car trailer had a "limited edition" wheel to replace the blown tire. Finally, after an additional 4 1/2 hours of waiting for a new trailer, we were back on the road. The customer service representatives were all helpful and pleasant on the phone but the roadside assistance service was lacking and we were stranded for 6 1/2 hours in 15 degree weather, which was not enjoyable.

Owner or attendant was not at counter and we had to go around back to find him. He was not pleasant. He acted as if he was doing us a favor by helping us. I would never return there even if he was the only U-Haul in town. You can improve the situation by getting rid of the person who helped us.

the representative was very helpful and thorough throughout the pick up of the rental.

I have no improvements. I was able to pick my Uhaul up, and drop it off with ease. The price was great.

The tire was 40lbs low so he just put air in it. The next morning I had to call Uhaul to get it fixed because it was low again. It should have been handled before that as it was obvious there was a problem.

The owner/operator was very friendly and accommodating.

Had a reservation. The location did not have any furniture dolly's, which I had reserved also. My card was still charged for them, which the guy did say he would credit me back for. Brought it back, I didn't fill the tank back up and knew i was going to get charged for it but was charged for 7 gallons of fuel for 18.7 miles driven...pretty sure the miles per gallon isn't that bad, even on a U.Haul!!!! I will be contacting customer service.

Trailer was dirty and had not had maintenance. It was full of road grime, and road sand from the previous rental. Tire pressures were not checked. I did all the above after I got the trailer home before loading my vehicle. The staff was more interested in their cell phones/videos/pictures than they were in me, the customer. In addition, the young man behind the counter needs a lesson in proper language (save the profanity for his own time) when in front of customers.

The service actually picking up the equipment was fine, but I called the day before because it was a different location than I had requested. When I asked if there was any way I could get the equipment moved to the location I had requested, the guy just say "no", which just immediately put me off. I did get ahold of corporate UHAUL later that day and the lady I talked to was very nice and explained why the equipment couldn't be moved. I still don't agree with that from a customer service perspective (I think the trucks should be able to be moved, at least to an actual UHAL location), but at least I got a lot more than just a "no".

There was no one around and no sign stating what to do.