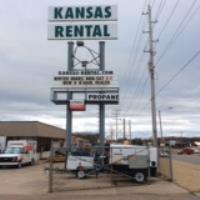 Nothing I can think off. Very professional

Canâ€™t think of anything. They were polite, helpful and knew their stuff. I will go there again and recommend to my friends. Vicky C

The truck's tires were nearly bald. The weather stripping on the interior leaks.

The owner/manager at this location is an amazing, knowledgeable and super friendly man! Everything was super easy and ready to go. I highly recommend this location! A++++ Thank you so much!

The associate was very friendly and helpful!

the tow dolly was to be picked up in Lawrence Kansas. I got a call later that day stating that it would have to be picked up an hour away in Topeka Kansas. When I made the reservation, this was not part of the deal. If there were another potion, I would have cancelled the deal.

The guy did not know what to do. No drop off for the keys. If I didnâ€™t go in during business hours I would not of been able to drop off even though it was a 24 hr drop off.

Location was over an hour from my preferred location. Why couldn't the truck be moved closer to me rather than requiring me to make additional arrangements to pick up the equipment so far from me? This is poor customer service with regards to Uhaul Policy not any individual. Very disappointing as one of the touted points of Uhaul is, "More than 20,000 locations Convenient pickup and return". (But not all with equipment, and not necessarily convenient for you.) Very disappointed with Uhaul. Will definitely be looking at other service providers if I move again.

We will NEVER rent from this location! No drop off for truck so had to return when they opened the next morning. Due to blizzard conditions we were 30 min late and had to pay for another day of rental, a dolly and insurance! Did not get an appliance dolly I asked for nor the moving pads I requested. The owner was rude to us!!! Worst experience I have ever had!!!! Do not use this location!!! I will tell all my friends this too!

Improve your quality of customer service at the main dispatch office. The staff at the location was nice, but the dispatch office reserved droop off after hours causing extra time taken to figure the issue out from staff.

The guy was very rude and wouldnâ€™t listen to me.

Make sure truck is actually clean and doesnâ€™t smell like smoke. Properly mark the trucks damage instead of sending out a worker with a dry eraser and walking off. I want a full refund the experience was terrible the place smelled no one called to confirm my reservation just terrible and now my stuff in cab stinks!

They could not be bothered to go out and walk around the truck or check the fuel or mileage. They told me to check it when I got in. When I got in the truck there was pop spilled on the cup holder area and truck was just dirty. When we returned the truck the owner said we owed another 90+ dollars. When I asked why he said because the card wa declined. I then had my husband come in and he looked on his phone and his bank showed they had taken out $150 something. I can send I screen shot. We tried to show the guy checking us out and he said he didn't need to see it because uhaul showed they took $139 something and he didnt care. I told him that if they took money then clearly the payment didnt decline. He said it declined for the charges for going over on miles. He said it was $90 something. I asked how many miles we went over and he said 50 something. I said 50 something at $1.09 per mile is not $90. At that time he gave me a print out of the bill. I looked at it. I seen that it was charging us for an extra day. I asked why. He said we were late because it should have been back by 1. I said the lady that checked us out said 2. He said you were still a little after 2. I explained we were outside with his guy parking it and getting the dollie out. Plue he had to chace his worker down to get the miles and gas which we left it with more gas than we got it. He just kept saying it wasnt his problem take it up with Uhaul. When i said you are the one that took the money out of the account and now wont even look and see that there is a difference thats a problem. He continued to say it was not his problem take it up with Uhaul. So i took the print out and left. As soon as I got home I called Uhaul. Spoke to a guy that called the story and spoke to the holy that I dealt with. Aside from him completely being dishonest about what happened saying I was willing to pay until the card was declined. He tried to charge the card before he told me there was any overages. If the card had not declined he would have charged it and not said a word. We would not have found out until we got the paper when he was done or when the charge showed on my husband's bank account. He also said that the girl that checked us out when we picked up the truck was there when we returned it. She was not. Yet another lie. He told Uhaul that they walked the truck with me when we pick the truck up. Another lie. My mom was with me and will testify under oath that they did not do so. The customer service rep did get the extra day charges taken off. But I got so wrapped up with that I forgot to deal with the fact that there was a difference in the amount charged to my card and what they say they took. I strongly feel also that there is no way we used that many miles as it was an in town move and all on the same side of town. But I sadly did not know how much of a crook and how much someone would lie so I did not check the miles when we got out. I have rented from Uhaul many many times in the

Very friendly and helpful. We were there only 15 minute and out of there.

Needs better customer service. I arrived to pick up the truck and the lady at the counter didn't speak or ask how she could help. The phone kept ringing she never said excuse me. She would stop what she doing with me and answer the phone. Her tone was rude through my entire transaction.

The service at the location was great. The gentleman was very friendly snd helpful. However, the U-Haul was not swept out when we recieved it and the gas tank was almost empty... per our contract we had to have it at least half way full... so I believe it should have come to us that way too.

The man at the counter was very nice and excellent. I told him about the poor quality truck and he said he would take care of it.

Location was excellent and the staff were super friendly and helpful. Will definitely use them again, and recommend Kansas Rental!

VERY SLOW COMPUTER AT THIS LOCATION IT TOOK 3 TIMES AS LONG AS IT SHOULD HAVE TO COMPLETE THE RENTAL AND I HAD PUT ALL MY INFORMATION INTO THE COMPUTER AHEAD OF TIME.

The sales associates were very patience and helpful. The U-haul exp itself was very time consuming and frustrating. It took 30 mins to get thru the check out process due to info that had to be redone. I've rented a u-haul twice in town in Manhattan and the process was smooth. To rent one in Topeka to take round trip was a very big hassle. However, the guys working were awesome just not the U-haul system.

Everyone was great and friendly. Very helpful.