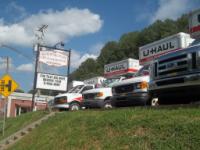 The wires was showing on tail lights..also they need painted and cleaned

Ensure that equipment does not leak I had quite a bit of furniture and items ruined due to water getting ehile driving in the rain.

This was by far the most difficult location we have ever had to deal with! We rent trucks all over the country and most are very accommodating. This location seemed like it went out of their way to make things hard. They seemed like it was a major inconvenience to them to rent us a truck. I would rather have my guys drive an hour out of the way to another location then ever have to go to this location again!!

The instructions to pick up the uhaul after hours were incorrect. And, extremely frustrating. I was giving a truck I was guaranteed it would have a ramp. I was picking up a piano last night. I was unable to do so because of your inability to inform myself and/or my brother. I had to beg the lady to give me one more night to pick up the piano so I need another uhaul truck now with a ramp to pick up the piano safely. I feel I should receive a full refund since I picked the truck after going thru the nightmare last night to get the truck and even more to simply return it less than 2 hours later. I believe a full refund would be fair. Thank you. Otherwise, I will share my stressful situation with my 5000 plus Facebook friends. I pray this is quickly resolved to what is fair.

Great people that are very easy to work with. Thanks

Upon returning the uhaul on Sunday 4/14 I received a voicemail on Monday 4/15 with a somewhat rude message and then when I returned the call the person I spoke to wasn't rude, which was a man, he was actually fairly polite however the voicemail was from a woman in which I couldn't understand her name but either way when I called to see what the issue was, which was not left on the voicemail, I was told I owed more money. Which is fine however I had to ask what for because an explanation was not given, also when asked if they could charge my card for the extra money owed in which was over mileage gone over, I was told no I had to come there and pay it, in which I replied that I am now living in Draper VA, hence the reason for the uhaul, and was told I could pay at any uhaul rental which is what I intend to do but in the future maybe some people, meaning whoever the female was that left me a voicemail could be more professional along with a better attitude. I will never rent from this uhaul company again. Extremely overpriced as well, most other places at least charge half of the money for a deposit fee and reimburse some back, it is ridiculous to pay over 300.00 dollars for a trip from kingsport to Draper VA, maybe you should consider dropping the price for mileage.

Truck was not clean on the inside. They quoted me a higher price than I had received on line. they did give me the lower price.

If I hadn't met a few people who told me where to get the key, I wouldn't have know where to go to get it. Maybe a sign or something near the Uhaul vehicles would be helpful. Otherwise, everyone was friendly and the rent/return process was straight forward and relatively painless.

The truck that I rented did not have the power to back up the driveway. I had to go up it in low gear. You need more powerful trucks.

Sadly the female handling my rental had minimal experience with the rental process. Her customer skills are lacking, flat affect and when spoken to she did not respond. Another employee stepped into help. 25 minutes seemed excessive to rent a 4x8 cargo trailer. Will seek out another uhaul location in the future.

explain to someone how to drop a trailer if the gates are going to be locked...

Nothing. Great experience. Thanks!

Very ease of use

These people are GREAT!! No problems here!!!

We had nothing but problems with Addington Oil Corporaton and the people who ran it. They were RUDE and customer service wasn't even a concern for them. They were very quick to charge us when they could, but when it came to addressing our concerns, they didn't have time or interest. Their facility has unreasonable hours of operation in my opinion, they're not even open on the weekend to help those who are moving or getting their things out of storage. We found mouse droppings all over our storage boxes when we picked them up. We had to be refunded from U-Haul twice because they tried to charge us $42.50 for gas. After my dealings with Addington Oil Corporaton in Weber City, I knew that I had to cover my butt by taking a picture of the gas gauge and mileage in the same shot. My gut was telling me that they'd try to pull something like this and charge me for gas, and they did! BUYERS BEWARE!!! Cover your butts and take pictures for proof. A whole week AFTER we got our things out of U-Boxes and returned them to Addington Oil Corporaton on the same day, they charged us again for another month of storage, almost $200. We felt like we were getting ripped off at every turn. This was our experience. I'd rather do business at a facility 100 miles away and get treated right, than to ever do business in Weber City at Addington Oil Corporaton again!

Truck was nasty on the inside looked like someone had been hauling hay or straw in it very dirty had a difficult time with app needs improvement.

Everything was great, good people to deal with, got me in and out in a jiff! Took care of me!

This location is the best I have ever seen!! They are all about you and your needs!

I can't think of a thing. Will highly recommend this location.