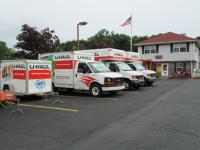 I had so many problems with Uhaul. I went to you because of your past reputation, but I will NEVER be back. First, I ordered boxes online. The online process of buying boxes was extremely easy. But when I went to pick them up the clerk was unhelpful and rude. He laughed at me and told me that the boxes that I ordered would not all fit into my car. I told him that I could make multiple trips, if necessary. After he loaded what he told me were all the boxes, I got home and found that he had only given me half of what I ordered. When I went back into the store the same clerk that helped me a couple hours before told my husband that the last clerk that helped me "should have told me to grab what I ordered." That confused me, especially after he told me he remembered me from my earlier visit. But what really irritated me was the fact that he was much nicer during my second visit when my husband was present. To add, Uhaul boxes have a "guarantee" that the boxes are good for 10-12 years and up to 4 moves. Many of the boxes were already damaged when we got them (we returned them for new ones) and almost all of them were destroyed during our move. The storage unit that I rented was clean, but unsecure. You could open the unit even while the unit was locked. We called many times during our rental, which was only a month, only to be run around in circles saying that they would fix it and never did. Lastly, I was suppose to get the first month free. I did not get the first free. In fact, my account said that I had a zero balance due after the first month. However, two days after the due date I received an email stating that I not only owed for the "free" month, but that I was late on the payment and that I owed a $15 late fee that they had taken the liberty of charging my card for. When I went to the office to dispute the charges, I was told that they were unable to reverse the charges and that I received the charges because I was late on my payment. Also, I was told that Uhaul would match any written quote from another reputable company. We received a quote from Penske and Uhaul would not even come close, so we used Penske. I'm a reasonable person, but this process was ridiculous! I will NEVER do business with your company again! I wouldn't even give you one star but I had to.

I appreciate the great service. Caring staff with friendly smiles. Thanks to all!

I scheduled through the 800 number on google and the employee that helped failed to tell me the office where I needed to pick up my key card was at a different location. That was a little bit of a hassle. The lady at the office was very nice and very helpful.

My unit leaked and some of my items were wet however not damaged due to being stored in plastic storage boxes. Report this when ending contract and staff took report seriously.

Mr. R Davis, was an awesome person to work with, as I was closing out my unit. He made sure that everything had been completed, and he made the closing of the units very ez... Great Job R. Davis

I missed one payment during the Pandemic. I was hit with a late fee and threatened with a lien. Mortgage companies, car loans, bills etc. Worked with there customers during this pandemic but uhaul didn’t ! Other then that employees and customers service where good, everything was clean and checking out was very smooth.

I’m very happy with my choice of Uhaul for my storage needs.

I would have given five stars, except I had to get two different units, and even though I asked for twenty four hour access, it was not added to my card, so that when I tried to access my unit after office hours, to actually put things in it, I was not able to get in.

You charged me for a month after I had already moved out, and then assessed late fees and threatened a lien on nonexistent items in the empty locker. When I called to fix this, I was told a GM would contact me within the hour. It's been a day and I haven't heard anything. I will never again rent a locker from Uhaul and will advise my friends and family to do the same.

There was no information that this location is not staffed, on website or at location. Phone number for storage unit was no good. Luckily found a phone number on a small link in the web site.

The storage unit itself was fine. The amount charged for a moving truck rental is outrageous. Honestly .99 a mile is more than some over the road truckers make. I won’t be using the service ever again

The whole experience went without a hitch! Even though you have plenty of hitches to rent...LOL . Would def come back

I never give a any rating higher than an average because that makes them want to do better.

The rental truck from Florida along with one month free storage was originally in my company name, a mixed up occurred during the storage rental that was placed in my personal account that costed me $

Everyone was helpful. I just wish I had chosen a larger unit. I didn't realize how small the size I chose would be. Checking in at one site for another site and not knowing wasn't ideal. Still ok thou

My things were safe and the environment was good!

I was very pleased, thank you for my great experience.

The gentleman who helped me was very knowledgeable, helpful, and professional. I haven’t moved items to the facility as yet but based on my experience at your sales counter, I have total confidence.

The two women who help me were FANTASTIC!